Would it makes sense for an intelligent race originated from snakes to possess the ability of hearing?

I want to explore the possibilities of an alien species not much unlike that of known to Earth: snakes going through evolution in a way that made them able to reach the intelligence necessary to use tools and form civilizations.

With arms and legs, of course, which implies that this species may have similarities with lizards and other reptiloid races, as well.

This assumption implies a lot of serious changes, e.g. in diet (exclusively omnivore snakes vs exclusively herbivore lizards), but right now, I have a specific question about perception.

I'm not a biologist, so I may be wrong, but I heard a theory that snakes are deaf, or at least they can't hear the way we do. It isn't an option for my species, though: I need them to be able to speak, and that is pointless without hearing.

Is it feasible to assume that during evolution, my snake-like species gained not only proper limbs, but also the ability to hear (and speak)? Would it mean any additional specific biological changes? (e.g. there would be no need to use their tongue the way "original" snakes do)

On Earth, snakes evolved from lizards mostly via simplifications. The most famous of those is the loss of legs. But the ears were also affected: when lizards actually hear sound in the range 500-4000 Hz (some up to 10000 Hz), snakes typically only respond to vibrations that they feel through they bellies in the 50-1000 Hz range (see here).

There's Dollo's law: evolutionary losses are unlikely to reemerge. So I see 3 options for your snakes:

Yes it certainly makes sense. Here is why: Claims that a particular animal is deaf or color blind, or lacking in any similar way, should always be taken as dubious. Very often the real finding is that an animal hears or perceives colors differently than a human. For example dogs are not color blind, they are dichromatic.

Snakes seem to posses something like hearing, in that they can detect vibrations (whether this is purely tactile or whether it uses a part of the brain that we would recognize as the auditory context I don't know. But since you are not talking about literal snakes on Earth you can choose). So in the evolutionary process whereby your primitive snake like beings evolve into human like snake beings you could do something like this:

The snakes were already utilizing "sound" in the form of detecting vibrations through the ground. As they evolved towards bipedalism (assuming that is what you want) the ability to detect vibrations in the ground would lessen (as less of the body is in contact with the ground). This could provide the evolutionary pressure whereby the snake beings with a slight genetic variation allowing vibrations to be detected further from the ground would be more successful. There is still a large gap between this and the development of hearing necessary for auditory communication, but it provides a rational start.

There will always be some chance involved in a process like this, because there is no reason to believe that a trait will come to be just because it would be beneficial. I mention this because many people mistakenly think that a trait will evolve because it is useful, or that the need for a trait magically causes it to arise over time. I just wanted to point out that there is no evidence for that type of evolution.

In regard to additional changes: Human like speech and comprehension are computationally complicated and expensive. I would expect larger brains, larger skulls, and possibly the need to be born premature to prevent the large skull from complicating birth.

You could also postulate that they would have more gracile features (like smaller teeth) if you like the idea that social beings can benefit from the retention of juvenile characteristics.

I think this is a definite possibility still. In a world where humans didn't exist, the probability of snakes becoming fully sentient beings is very high.

Although snakes don't have disposable thumbs, they also don't have hearing. But now, civilization has locked up the majority of snakes. This means 2 things:

2: The few snakes in the wilderness also means they have to be aware of their surroundings, on a sort of "survival mode" as such. This means more attention to all of the predators that they may have. When that happens, the snakes, through natural selection, will begin to develop hearing.

PS: Here's a photo of a snake as a reference: 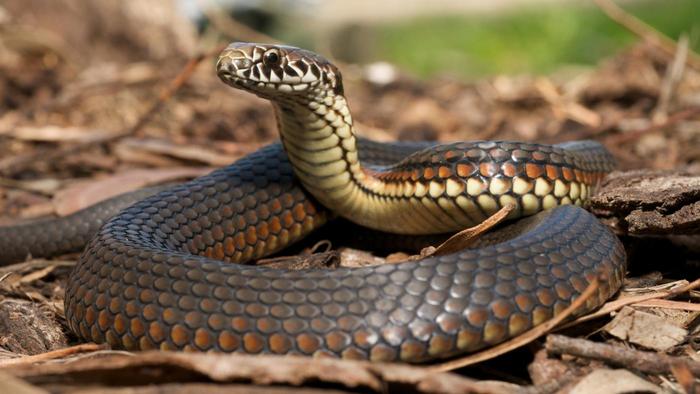 Not only are snakes not deaf, they actually have a proper inner ear. What they lack is an exposed tympanic membrane (i.e. eardrum) which most terrestrial vertebrates use to transmit vibrations from the air to the inner ear.

Instead, snakes use their entire body as an "eardrum"; vibrations pass from their belly and especially their jaw, affecting the inner ear and allowing them to hear just like other animals. This is more useful to them - vibrations travel through the ground better than they do through the air (which is why you can hear footsteps from far away by putting your ear to the ground), and if they're going to have their head that close to the ground all the time anyway they might as well capitalize on that fact.

If snakes were to stop crawling on the ground, it is likely that the skin covering their inner ear would thin out and develop back into a regular eardrum so they could hear sounds through the air. The bigger question is where their legs would come from - most snakes have already lost any remnant of their legs (aside from simple spurs in some species), and would be unlikely to gain them back. But that's a different question entirely.

Honestly with an alien species you could go pretty far with unusual genetics. Their evolution comes entirely from their environment, so the need to hear is definitely something that would cause them to develop some sort of ear like structure. not necessarily ears like we see in most land mammals, but when it comes down to it an ear is just a structure that converts pressure waves into something our brain can understand. With an alien species, if you really wanted to, you could even have them process those vibrations through their skin; or give them antennae like insects who use them as both ears and a nose.

Honestly it isn't that hard to imagine anything being able to hear, really the difference is how much. The basic senses can be found in most organisms to some degree, but all at different levels. Do you want them to have really good hearing like bats or dogs? What about their sight? Some snakes see in infrared, do they see like snakes or humans or something else? It's really up to you how you want them to hear or really process anything as long as the basic function is accomplished.

Since this is an alien species, the issues of real snakes don't apply. We can say that certain features in a specific species are truely lost by looking at the DNA. More difficult to decide by inspection but observed to be the case is areas where development is locked in and any change would probably not work; thus the fixed number of limbs for tetrapods etc.

The aliens are not our snakes. So why not have them able to evolve limbs and hearing? They still have DNA (equivilent) code in place for limbs that can be switched on, or don’t have the developmental lock on limbs so adding a new body segment with limbs might be a thing that happens on that world.

Your snakes might have a keen sense of hearing, unlike Earth snakes, and use it for hunting, to find prey in the leaf litter and strike exactly. Maybe a cobra-like hood provides parabolic reflectors and it hunts like an owl.

Would you be willing to consider this difference from our snakes? - Your alien snakes develop via metamorphosis, so they are born looking like lizards and then lose limbs and hearing, turning into adult snakes. Or I should say, the ancestors. So (and somewhat correlated with the evolution of humans), the way they'd retain limbs and hearing would be via neoteny (retention of juvenile traits into the adulthood).

Of course, ideally there needs to be an environmental reason for both the metamorphosis and the neoteny, and the only examples I know of where the body plan from larva to adult becomes simpler is in the sea... There's also Caecilians, but I don't know anything about them. However, they seem like a promising venue of exploration.

snakes can hear, they still have an internal ear, which is the complex part, they also have an ear bone, they just lack an external opening/connection. That could easily re-evolve the that, it would be far easier than re-evolving forelimbs.

They just have to realign the ear bone to contact the skin instead of the jaw. 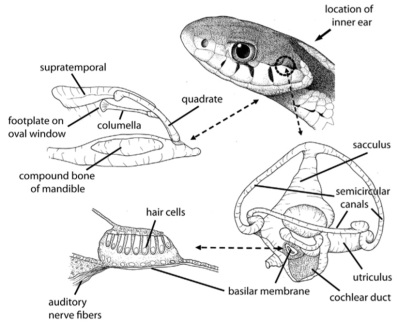 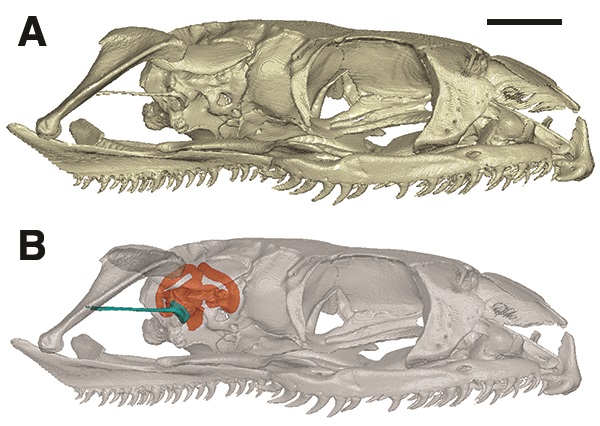 I am not a biologist either but snakes can hear just not the same frequencies we hear. So, i think if your snakes have evoloved enough to speak to each other then it is fine if their hearing is evolved too.

On a second note, i dont know the exact number but if a snake can hear up to frequency X Hz then maybe their voices (i dont know i am just guessing) could only go up to X Hz. Ah, unless they're supposed to be heard by others at some point.

Not the answer you're looking for? Browse other questions tagged reality-check evolution xenobiology senses reptiles or ask your own question.

6
How would an intelligent planet develop the ability to bend space-time?
3
Would it be possible for a population of snakes to survive by eating nothing but fruit?
9
How plausible would it be for a Reptilian race to have settlements in cold regions without hibernation?
16
How would one determine the upper and lower temperature limits for a race of human-sized reptiles?
8
What would humans need to sacrifice for a better sense of smell?
6
Is it plausible for a being to possess a singular halo-shaped 'horn', while other members of the species possess two 'regular horns'?
36
What sort of world would help prevent an intelligent species from discovering evolution?
5
How would the dwarven Stone Sense work?