There is an earth like planet, with similar mass, gravity, atmosphere and magnetic field. The main difference with earth is that it has a highly eccentric orbit (eccentricity 0.8).

Let's say that the planet shows a form of quasi tidal locking, in the sense that when it covers the green sector in the picture it shows always the same face to the star, which is similar to our Sun. The closest it gets to the star is about the same distance as Mercury. 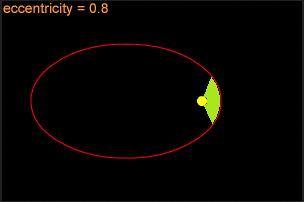 Under these assumptions, would the thermal inertia of the atmosphere at least mitigate the scorching thermal effect of the star? Or would the atmosphere be whiped away after few local years?

NOTE: I am not asking if it would still sustain life.

But your question was about atmosphere. During the winter, it's entirely possible the water and co2 in the atmosphere would freeze out; in the summer, it would most definitely thaw. The magnetosphere would have to be strong enough to deflect the solar wind at the closest point. Assuming a strong enough magnetosphere, and the fact Kepler's 2nd law would make the planet spend much more time farther away from the star than closer (since it would speed up when closer), you'd have long winters and short summers. If the magnetosphere was strong enough, you'd at least have the atmosphere stay, albeit likely thinner, since it would freeze out most of the time.

Hal Clement has a novel "Cycle of Fire" on a world like this. There are two separate biospheres -- one that is active during the 3/4 of a year when the plant has oceans, and a different set of critters during the shorter, hotter period when the oceans boil.

The planet circles a high luminosity star, so the year is quite long

Poul Anderson has a novel "Satan's World" about a rogue planet making a near pass to a F1 blue giant, which thaws it out enough to be useful for mass transmutation to get established, then the waste heat keeps it from refreezing.

Timing is everything. If it circles a red dwarf in a short period orbit it might be quite livable.

Having large deep oceans will help, at least with coastal areas.

The planet would only be pseudo-locked. If it had a rotation rate of a few revs/year you might get one face getting most of the heat.

This might actually make the planet more livable. Water would evaporate on the hot side, and move in mass to the cold side, and condense there -- net effect moving a lot of heat away.

Much depends on how much atmosphere you have. Venus is a year round searing black calm at the surface.

So: Suppose you had a red dwarf so your planet has say, a 2 month orbit; lots of green house gasses, you get warmed up in your near by pass, then you cool off over the next 6 weeks of your short year. If the greenhouse effect is good enough, you don't all turn into corpsicles before the next spring.

But if you did it with Earth -- put earth into that orbit around our sun, then the perihelions would boil oceans, and the rest of the year would likely freeze the entire atmosphere.

Not the answer you're looking for? Browse other questions tagged science-based astronomy .

50
How would winds behave on a tidally locked planet?

10
Seasons on a planet that's tidally locked with the smaller star in a dual-star system
8
Moonlight and the night side of a tidally locked planet
5
How to rapidly make an Earth-analog turn into a scorching wasteland?
9
Temperatures in an eccentric orbit?
10
How would this tidally locked planet be affected by its moon and would the moon have a deaccelerated orbit?
4
No More Looking from the Same Side of a Mostly Liquid Surface Terrestrial-based Moon
9
Planet with big axial tilt, but very close to its star
6
Is it possible to have a planet with earth-like mass but double the atmospheric pressure?
17
How do I determine when a planet is visible?