What would be a reasonable caliber for an assault rifle and sniper rifle for a planet with pressure of 3 atm?

Modern level tech equivalent. Planet with 3 times higher atmospheric pressure, but partial pressure of oxygen is comparable to this on Earth. Gravity is insignificantly higher than good old 9.81m/s². Guns are designed to be used by humans against humans.

How should I adjust ammo size to be practical under 3 atmospheres?

(Should the bullets just be make a bit bigger? Or maybe narrower and longer? Or maybe average distance of engagement with machine gun would make such slowing down of bullets barely noticeable? Or maybe for long distance shooting one would need something comparable with anti-material rifle?)

Tripling the atmospheric density will triple the drag. To compensate we have a few choices: more force, less area, less drag.

We could triple the powder charge while keeping everything else the same, but that will have severe knock on effects for the rest of the gun making it much larger and heavier. Pressure is force / area. If we want to increase the force while keeping the diameter of the projectile (ie. the area) constant we'll need to triple the pressure. Most guns are already operating near their peak pressure, so this will make most guns explode.

For example, your typical 9x19mm pistol round has a maximum pressure of about 240 MPa using about 5 or 6 grains of powder. Now we're asking them to do 720 MPa. 7.62x51mm NATO rifle round asks rifles to handle just 415 MPa.

A more massive bullet is more resistant to drag, but a larger caliber means more area which increases drag.

To increase a projectile's BC we want something long and dense with a lot of mass and low cross-section. We want sub-caliber flechettes. The most extreme example is the APS Underwater "Rifle".

I use quotes around "rifle" because it has no rifling. Instead it fires 5.56mm x 120mm bolts with an effective firing range of 30m at 5m under water.

This is extreme overkill for our 3 atm. The density of water at that depth is 1000 times that of normal air, not the 3 that we're dealing with, but it was such a cool find I had to include it.

There have been any number of flechette weapons in trials over the years boasting higher capacity, higher velocity, and flatter trajectories at a cost of reduced accuracy or more complicated and expensive ways to keep them accurate. Several showed up in the US Advanced Combat Rifle trials in the 1980s.

One was the Steyr ACR firing a sub-caliber 1.5mm x 41mm flechette weighing 10 grains. Unlike the APS, Steyr's weapon had modest rifling to give a slow spin, plus it was fin-stabilized, for accuracy. 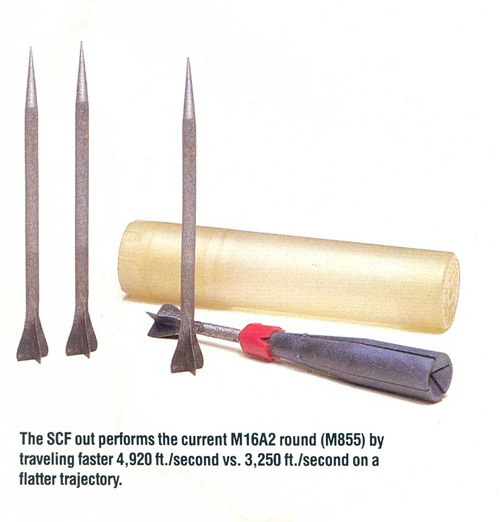 Its 10 grain projectile weight was 6 times less than the 62 grains of 5.56mm NATO, but made up for this with its area of just 1.8mm² compared to the 24.3mm² area of 5.56mm NATO: 13.5 times smaller area. Assuming similar density, this could double its ballistic coefficient.

This bears out in its performance. At almost 5000 ft/s, it was nearly 50% faster than the standard 5.56mm NATO with a much flatter trajectory.

The Steyr ACR worked, but ultimately none of the rifles succeeded in being significantly better than the M16 firing 5.56mm NATO. But in a world with triple the atmospheric pressure, flechettes would likely have a great advantage.

With higher atmospheric pressure, there is more stuff getting in the way of the bullet in the distance between you and your target. The slug is going to slow down in accordance with this. How do we deal with this? If you simply take an earth weapon in this place, the effective range is going to be dramatically reduced.

I would think that a few things need to be adjusted. The first is average barrel length. As the propellant expands in a modern firearm, it accelerates the slug only for as long as it is in the barrel. The expanding gasses are focused until it leaves the barrel. This is why the muzzle velocity of a specific type of ammunition can vary depending on the gun it's used in. for example: The Normal 9mm round from a normal 9mm pistol leave the barrel at between 360 and 426 feet per second. The muzzle energy is 630 joules ke=1/2mv^2 .The normal 9mm barrel is only about 4 inches long. Take exactly the same round and put it in a Kel-Tec Sub 2000 carbine rifle with a 16 inch barrel, the muzzle energy jumps to 1024 Joules. That is just an example, your mileage may vary.

Next step would be to look at the aerodynamics of the projectile. Long and slender would be the way to go. Something like a 5.56mm would need the slug to be longer to have a similar mass to the slug of a 7.62mm. To add to that, the powder charge behind the slug would also need to be much larger to push the mass down the barrel. You might look into flechets and Sabot rounds as well. A Sabot round is a smaller projectile than the barrel encased in a plastic wadding. This allows a large powder charge to fire a smaller slug, achieving a much greater muzzle velocity. Anything you do to reduce drag would be helpful.

Finally, increase the amount of gunpowder per round. We do that here all the time. More propellant means more feet per second at the end of the barrel, which in turn means increased range, so long as the flight of the slug is stable

Just keep in mind, most of the kinetic energy comes from the v^2 :)

Air resistance is, to a first approximation, proportional to the area presented to the line of flight. With 3X the air, the air resistance will be more than 3X greater. Which means that either you'll need a faster muzzle velocity or a smaller profile for your bullets, or both; the exact aerodynamic profile, grooves, or coatings will have only secondary or tertiary effects, but could be useful. My guess is that nothing you in so far as bullet design will provide an equivalent assault/combat rifle to today's. Larger calibers, longer (more massive) bullets will only partially solve the problem. The problem with your question is that you seem to assume that something that is only accurate/lethal at 3 meters isn't an assault or sniper weapon. It is, if that's the best you (or anyone else there) can do. (Well, no, not a sniper weapon. A lot of the record sniper shots were made with huge weapons (50 caliber), so maybe sniper rifles are 2,3,or 4 person weapons on this planet.

Slow and steady: the Rocket Slug

Once the projectile leaves the gun it starts to slow down, its velocity decreasing according to drag. If you want your projectile to travel farther you can either reduce drag or increase muzzle velocity; increased projectile mass would also work but options to do that are limited by available materials (e.g.: lack of osmium). The green checked winning answer posted here reduces drag by reducing A, area. A longer barrel or stronger charge can increase muzzle velocity as noted in a different posted answer.

Note though that drag is proportional to velocity squared. The faster the projectile is travelling the more energy drag will take from it. As you push faster and faster you get diminishing return on your investment of more energy. As regards reducing the forward profile (A), this necessitates either a lower mass projectile or an elongated projectile (like the flechette darts) which become difficult to launch from a barrel (as commented by @Paul TIKI). Lower mass means less kinetic energy carried by the projectile which means shorter range and less stopping power. If you want to keep your energy and correct for low mass with increased velocity you run into u^2 again.

The solution: ammunition which can accelerate itself in flight. The bullet becomes a rocket. This was tried in the 1960s: the Gyrojet was a gun which fired special rocket ammunition with a slow muzzle velocity but which then sped up in flight. 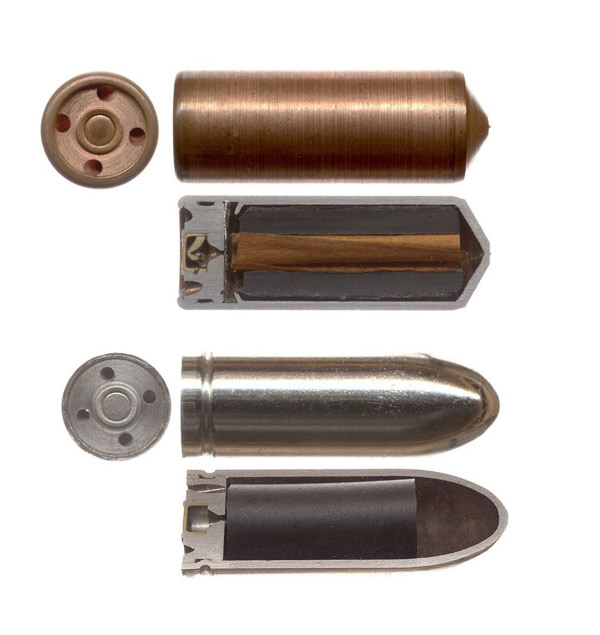 I would have liked to find a schematic diagram of the gyro jet ammo; if someone does please edit this to insert it. I take away from this unlabeled cutaway that it shows the compartment within the projectile for rocket fuel.

60s tech might be out of range for the scenario posed here. My spin on the gyrojet: a weapon like a large bore Civil War rifle. The projectile is fired normally, with a charge in the barrel accelerating it. It would be nice (and would save space) if this charge were added separately and not incorporated in the bullet - again like a Civil War rifle. The projectile itself has its own onboard propellant which is ignited when it is fired. Rather than an explosion this burns slower in the manner of a rocket, continuing to accelerate the projectile to its target. Rockets can and were done with 19th century tech. Here is the Hale rocket from https://civilwartalk.com/threads/rockets-in-the-civil-war.19824/. I am intimidated just looking at it. 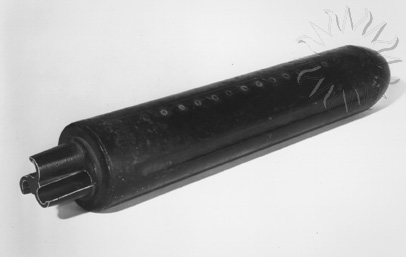 Hale Rockets : By the middle of the 19th century, improved British rockets eclipsed long-lived Congreve rockets. Separate studies conducted in France and the United States suggested that rockets would be more accurate if they were spun, like the way a bullet is spun after it leaves a gun barrel. An Englishman named William Hale was the first rocket designer to take advantage of this principle. He adopted a combination of tail fins and secondary nozzles through which exhaust could pass. Hale rockets became the first spin-stabilized rockets, and quickly became standard equipment for both the British and United States armies.

Back to the gyrojet, those projectiles sped up in flight and then really packed a wallop. I think these thick air world projectiles just need to maintain their slow black powder tech muzzle velocity all the way to the target. It could be weighted or jacketed with lead if you had the space but I think will need to be iron to contain the rocket. Or maybe lead wrapped with steel wire? The Hale rocket is as big as it is because it has to blow up at the end of its flight. The projectile requested here just needs to hit someone.

So: a rocket-propelled Minie ball.

6
How to roughly extrapolate artillery range for planets with different atmospheric pressure?
2
How would a short distance flechette gun look and function?

7
Consequences of Earth-like planet with denser atmosphere
2
How would a short distance flechette gun look and function?
4
Causing motorcycle crashes with a sniper rifle, no evidence left
6
How to roughly extrapolate artillery range for planets with different atmospheric pressure?
3
Planet With Higher Atmospheric Pressure
3
Realistic Rounds for Penetrating advanced body armor? A round for standard infantry against nano-machined ceramics
4
For a planet with a given equilibrium temperature, what is the maximum pressure possible?
3
What atmospheric pressure and temperature are reasonable to maintain water on a low gravity planet?