What natural protections could a small oceanic island have against tsunamis?

In what ways could an island be protected from tsunamis, given the following constraints?:

(See Easter Island for a real-life example that satisfies these rules.)

Possible parameters to consider include the shape of the island, the slope of the insular shelf, the island's topography, etc.

So far, I've been able to come up with the "obvious" solution of having the island have high cliffs all around the coast, but I'm curious what other solutions there are that I haven't considered.

You have the right idea, but misplaced. All that is required is that the island be the peak of a seamount which rises steeply from the ocean bottom. Tsunamis in open ocean have little amplitude (ships hardly notice them), but extremely long wavelengths. When these approach a shallow, sloping coast the water in the fromt of the wave starts to slow down, and the rear part catches up, the velocity of the wave increases and water starts piling up into a much higher, shorter wave. Coasts with a steep underwater approach simply don't get the "tidal wave" effect.

Another way to look at it is that, since a shallow approach produces a short, high, fast wave, the wave has no chance to move laterally around an obstacle, and tries to go over it. A longer, slower wave has the time to be deflected around an obstacle without much amplitude increase.

EDIT - In comment, the question was asked, "what do you mean by "the velocity of the wave increases", and a response will be too long for a comment, so I add it here. The short version is that I misspoke - the velocity does not increase.

As the wave propagates into shallower water, it loses velocity (proportional to the square root of water depth), and gets higher.

As its height increases, though, at some point the wave shape changes from being part of a wave system to that of a solitary wave - basically, once the wave trough touches the sea bed the behavior of the wave changes radically. I misspoke in saying that the wave speeds up. It does not. What I meant was that the higher the wave, the faster it propagates once it becomes a solitary wave. It may help to consider that a wave is in constant collapse, as the weight of the total wave causes the lower sections of the wave to squirt forward. The higher the wave the greater the pressure and the faster the base of the wave moves - and the dynamics of the wave as a whole keep the upper section in place, although the actual water molecules are constantly recycling their positions within the wave. And, of course, at this point the wave will begin dissipating as it travels inland.

If you ever watch one of those documentaries about the crazies who surf the Condition Black (40 and 50 foot) waves in Hawaii, you'll notice that all those surfers get carried out on jet skis and start their runs behind the jet skis. That is, they don't get dropped off, stationary, at the base of the wave. There's a good reason for this. If they are stationary in the water, the wave moves so fast they they can't accelerate fast enough to keep up with the surfable portion of the wave face, and will either fall down the vertical portion or get left behind by the wave, depending on the exact shape of the wave. Mostly, they fall down the face and get driven under.

I live on an island where we have had a couple of tsunami. The parts of the island least affected (on the side it was hit) were the ones with steep dropoff into the sea. A gradual rise like a tropical beach is what makes tsunamis so dangerous. A boat in mid ocean might not even notice a tsunami.

So natural defence is steep dropoff without sloping beaches. Don't rely on reefs, those get destroyed and they don't recover within a human lifetime. But tsunamis main danger is an uneducated populace living in the prime habitat of the lowlands and beaches.

If your island has a history of tsunami caused by a fault line, it's only going to get hit hard from one side. The reef if any on that side would be long gone, the land itself would be shaped by successive tsunamis, and you may have a situation like some of the Marquesas where all the beaches are on one side and the other side is mostly sheerish cliffs with no reefs.

So you only need cliffs on the affected side, fault lines don't move around arbitrarily, all the tsunamis will be coming from the same direction.

Video of a model in action: https://www.youtube.com/watch?v=ljLAfU132sw

https://www.newscientist.com/article/mg22430005-200-mangrove-forest-planted-as-tsunami-shield/ They break up the waves, the deeper the row of trees the better. It's quite simple really. It will make that part of the coast hard to use for fishing and genera; boat usage.

What about a barrier reef? 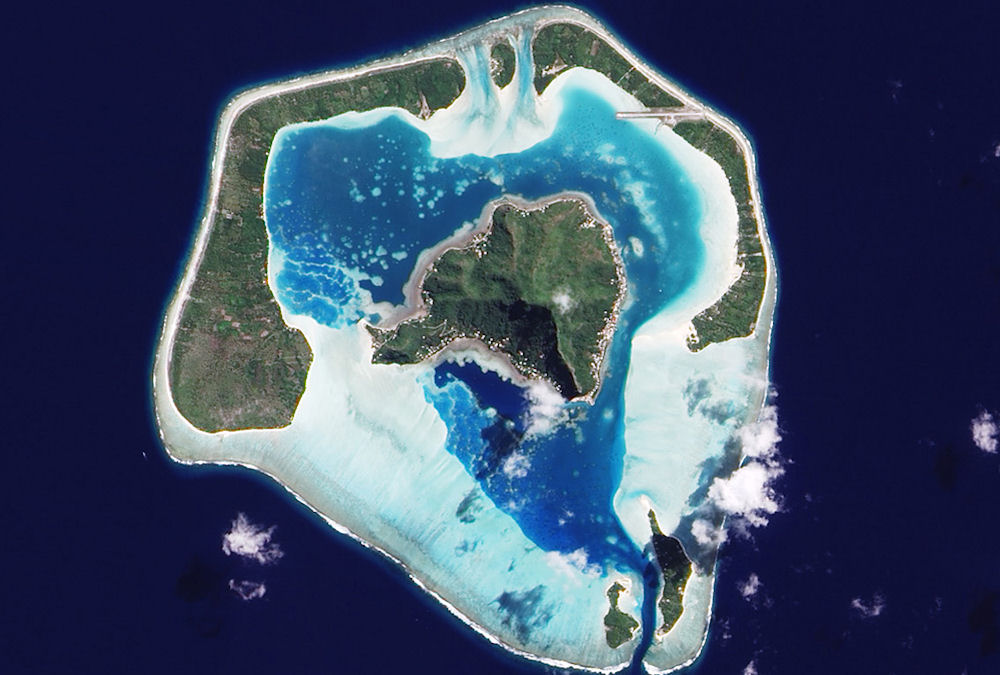 For example, the island in the center of this atoll (Bora Bora) is about 1/5 the size of Easter, and it is going to be much less susceptible to waves of any sort. I'm sure an island the size of Easter could have such a barrier reef as well.

Stack a series of large rocks inland from the beach, and add plantings like mangroves, palmettos, and other beach plantings to fill in amongst the rocks. This does not prevent flooding, but it does calm the wave system when it comes rushing in. You can see these rocks in action about a little after a minute into this film.

The surge of a major tsunami can get up to 30m height, but the level raise is usually about only 3m. Your bio-barrier can prevent the majority of the damage caused by surge, and your protected buildings can be naturally on a rise 3m or more uphill from the beach, or on solid stilts.

The death toll difference between the 2004 and 2011 tsunamis was likely to do with missing infrastructure in the former, but also due to citizens of Japan being more aware both culturally and formally by education: there was an earthquake, something's wrong, get to high ground.

In your question, we can't provide artificial infrastructure, so I would say that in addition to your bio-wall, you can provide education.

If you know in general which direction your tsunami is approaching from, make sure you do not develop on the beaches of the opposite side of the island. On smaller islands, the wrap-around effect (refraction) makes the back side of the island much more susceptible (but of course the front gets slammed, too).

Prioritize residential units on higher ground - if you have to prioritize. If the tsunami occurs during the night, people will likely be sleeping, so they may have no clue that it's coming. So, if you have to have buildings near the water, use the types of buildings that will be occupied during the day (commercial units) where people are awake and can be better informed to get to high ground.

A breakwater at sea

A 'barrier reef' grows out of the continental shelf and would be destroyed by successive waves. Let's go one step bigger: Half way between the faultline and the island there is a chain of underwater mountains (pretty much other islands that don't quite reach the surface) that rises from the seabed for several kilometes.

This causes any incoming tidal waves to break over the range rather than the island itself. For story purposes the breaks should be visible from the inhabited island -- though the islanders might not know exactly what they are seeing. The energy from the broken wave then has time to be reabsorbed into the deep water before it gets to the island.

Problem: I don't quite understand where the energy from the tsunami 'goes' after it breaks over the mountain range. Why would it hit the island with any less energy than it left the range? Would it really be reabsorbed into deeper water?

Another problem: Tidal waves have MASSIVE wavelengths when traveling over deep water.. They can stretch into the hundreds of kilometres. Boats might not notice them. 'line of sight' is about 5km at ground level. I can't imagine 5km is enough distance for a tsunami to properly form in the first place.

A Solution: Okay the faultline is not visible from groundlevel, but it might be visible from the island's highest mountain. Still at 500m the horizon is still less than 80km away. . .

Another Solution: Since they cannot form properly in the space provided, these are 'not normal tsunamis'. They do not have to behave like normal tsunamis and 'realistic' countermeasures do not apply.

Lowering the possibilities of a Tsunami : would be pretty hard, if not outright impossible, but if you could destroy a part of the ocean around you, make the depth there lower and so on ( it is impossible )

Another impossible way is to : stop earthquakes, hence stopping tsunamis. Problems ? Countless... Earthquakes are created by the formation of new land, explosions in the mantle ( if I remember well ), the tectonic plates moving and crashing against each other, huge explosions on a scale of an atomic bomb...

Hmmm what other ways have other people not mentioned... Oh yeah, if you have let's say limitless resources, a more available way would be to build a dam or something like that, as defensive wall against tsunamis ( also impossible, since tsunamis carry the force of an atomic bomb and I suppose we don't have much to go through after that. )

And lastly making an underground city, not affected by tsunamis, something like a secret base and sooo on... Problems ? Yes, the earthquakes would be a lot more severe in this case.

Not the answer you're looking for? Browse other questions tagged science-based environment geography earth .

9
What natural or artificial geographical structures that could allow a large-scale true "water going down the drain" whirlpool?
7
What science-y stuff could hide an island?
11
What natural defenses might an ecosystem evolve against dragons?
2
Man-Made or Natural Disaster that could split a large volcanic island into three smaller parts?
4
Can a small island realistically have all these environments?
52
What natural phenomena could make an island unreachable?
5
What natural event could strip all of Earth atmosphere?
56
What could prevent players from leaving an island?
10
Relativistic Interstellar Combat
4
Would mountains on the coast of a small island continent still have a rain shadow?