The resonating sword of doom

Jack is back and his first opponent proved, that TARTAKOVSKY IS STILL THE KING OF STORYTELLING and characters and visuals.

Basically, I want to make something similar to the weapon of Samurai Jack's first real opponent (Scaramouch) from the fifth season.

Further information can be found here.

Would it be possible to make such a weapon? If yes, then what would be its limits?

The idea of destroying things by tuning to their resonant frequency is well known, and even works in some cases. However, the totality of the task at hand is more complicated than that.

The idea behind destroying something by emitting sound at its resonant frequency is to transfer energy into the system at a "resonant" frequency, which is one that the material naturally continues to oscillate at rather than bleeding the energy off into some other form like heat. Any medium that is behaving elastically (like glass) has a resonant frequency which can be calculated from its properties.

The destructive bit arises when the energy reaches a point where non-linear effects start to take effect. In the case of a glass breaking, its because bonds get broken at the region of the highest stress and that causes an avalanche like effect which destroys the material. However, this is not the only non-linear effect that can be achieved. Any system wastes energy into heat. No system is perfectly elastic. As an example, a glass that is tapped, causing it to ring, will eventually stop ringing because the energy is emitted into the air as sound vibrations. You need to put enough power into the system at that resonant frequency to reach catastrophic effects before the object under attack can bleed the energy off into heat or emit it elsewhere.

In the case of a glass, this can be done with a simple loudspeaker. The loudspeaker can generate enough power to overwhelm the attenuation of the glass and cause it to reach its breakdown point. In other cases, you may need much more power. Galoping Girdie famously collapsed because the wind was capable of causing the bridge to resonate wildly enough to break down. That took more power, though. It took a mighty 42mph sustained wind to take her down.

Modern engineered products tend to be aware of such effects and are designed to be immune to them. We have many ways to bleed off vibrational energies into heat before they become an issue. For example, you may have seen these little guys on power lines: 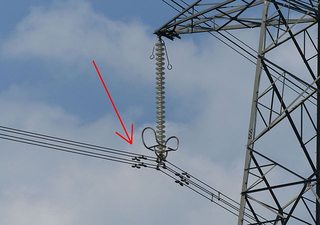 In theory you can still attach such a system by attacking the GCD of all of its frequencies. If you have an object that resonates at 500Hz and it is coupled to an object that's tuned to 495Hz, you can still cause the whole system to resonate at 5Hz. However, this can quickly lead one into a region of frequencies where the assumption that materials are elastic is not so valid. If you have many many coupled resonators together, their common resonant frequency might be thousandths of a hertz. As you get into those ranges, the elastic assumptions get tricky. More and more of the energy can get turned into heat by inefficiency. This is why you can't find the resonant frequency of a human and have them explode.

Well, you could, but it would involve pumping enough power into the system to overwhelm our ability to dissipate that energy as heat. At those frequencies, you might as well stop thinking in terms of loudspeakers, and start thinking in terms of hitting them with a baseball bat!

Or a sword! Swords are very good at this sort of thing!

No it's not possible to make a weaponized tuning fork.

In perfect laboratory conditions on materials prone to shattering ie. glass it has been possible to shatter materials using their resonant frequency.

Getting arbitrary objects to explode just by tapping them in an object the size of a knife is pushing the bounds of impossibility.

Consider a swing that a child is playing with. Did you know that the swing has a resonance frequency? It's the time it takes to go one way and then come back. If you know how to, you can add energy a little bit at a time and end up swinging pretty high. With a sufficiently large swing, you could easily get 3 meters off the ground, higher than the current world record high jump.

Resonance frequency works the same way in other objects - if something has a resonance frequency, you can use that frequency to continue adding energy to the system. However, you'd never get an explosion because of this. Because you're gradually adding more and more energy to the system, eventually the system will reach a point at which the weakest part will no longer be able to withstand the forces on it. When that part breaks, the resonance frequency will almost certainly change, so the rest of the system will survive. The best case scenario for your sword of doom is that the entire target is of a uniform strength, and the entire thing would shatter.

An interesting case of resonance frequency wreaking havoc is with the original Tacoma Narrows Bridge, "Galloping Gertie." Due to lack of proper damping systems, it had a resonance frequency that the winds would sometimes hit. So one day a storm with the right wind speed lasted long enough that the bridge eventually collapsed. If you watch a video of the collapse you'll notice a some interesting things. First, it was not quick - it took an hour of intense swinging for the bridge to collapse. Second, there was a lot of energy in the system - the bridge was moving a lot. Third, the bridge did not explode - it shook itself apart.

There's a new bridge there, now, that doesn't gallop. The reason it doesn't gallop is another reason why your sword of doom isn't plausible - damping. Bridges that have built since then have parts in place that can absorb extra energy, effectively eliminating the object's resonance frequency. You've probably personally experienced this as well - if you're holding a piece of metal and hit it against something, it won't ring for very long. That's because your hand damps the energy in the metal.

So unless Scaramouch's sword had a ridiculously powerful energy source, realistically Jack's dagger would have been protected from it just from Jack having it in his hand.

Not the answer you're looking for? Browse other questions tagged science-based physics weapons or ask your own question.

25
Shattering Swords: Yea or Nay?
7
Can a sounds frequency stun?