How could a creature get off a planet without technology?

Imagine a spacefaring creature, one that colonises star systems, and then shoots some of its kind on to another system (the mechanism for doing this doesn't matter). The question is, how could this creature get into space in the first place. (It has to evolve on a planet, and be fairly large, eg. human size or larger).

I don't agree with the notion that it must have evolved on a planet.

I do agree a planet is needed for life to start out. Until it can evolve protective mechanisms it needs a reasonably benign environment.

Ok, we start with a terrestrial planet, life has evolved to the small multi-cellular level. A rogue star comes along and jostles the system and things start going haywire. Our formerly peaceful planet comes under the influence of a gas giant that is now in a highly elliptical orbit so it's many years between encounters. They are in resonant orbits so they will tend to maintain their relative positions.

At first, the encounters are distant enough that the planet remains basically unharmed other than losing a bit of atmosphere. (It would be quake city but that only going to cause local kills.) The inhabitants of the planet have to evolve to cope with the thinning atmosphere and accompanying increased temperature swings. However, as time goes on the encounters get closer, the inhabitants have to get better and better at riding out the bad times.

Finally, it gets close enough that the orbital deviations are too great for resonance effects to overcome, the terrestrial planet is kicked outward a bit--and the next encounter passes within the gas giant's Roche limit--the planet is gone and the gas giant gets a spectacular ring system.

Our rugged organism has evolved enough defenses that it can survive in this new environment. Now we have space-based life and it can evolve.

Separating one's offspring is beneficial (both to give the offspring new hunting grounds and to keep them from hunting on your grounds), at some point a crude solid rocket evolved. Once it arose it was a sufficient advantage that bigger and better rockets arose, eventually reaching the point that a creature in a rich area in the outer part of the star system could occasionally grow one that is interstellar-capable.

You need a creature that push the boundaries of the science-based tag and the limits of what qualifies as biology.

This space faring creature has evolved to the point it no longer needs a star's light for energy. It has achieved the next leap where this creature can fuse hydrogen in special organs inside its body to produce energy. In the process of evolving this it has evolved natural defenses against the hazards of performing fusion (like generating its own magnetic fields), which help protect it from the hazards of space.

It can eat any raw materials it wants for fuel as long as it has hydrogen, but prefers matter that contains hydrogen that can easily be separated off for fusion. As such it does not need planets to have oxygen or a specific atmosphere composition in order to survive. The atmosphere would need to be nontoxic, noncorrosive, and generally not dangerous (as in not Venus).

Much like how we have cold blooded and warm blooded animals, this creature would be in its own category of hot blooded. The fusion reaction would produce lots of heat as such the creature can heat itself. So planets that do not get much sunlight and thus are blocks of ice would not be much of a problem, and likely would prefer colder planets.

How it evolved to get off the planet

Fusion produces far more energy then conventional fuels. If the creature can expel the energy in a controlled fashion, it could provide enough lift for blast off.

I see this creature had evolved to spread its spores over a large area by going through a final metamorphosis that essentially converts the adult into a rocket with the spores as the payload. Early on the adult would launch into the atmosphere and explode (not a violent explosion) launching the spores over a wide area. Selection favored adults that could launch further and higher into the atmosphere to spread their spores over a bigger area. Eventually the final stage started to drop spores on one or more of the planet's moons.

From the moons it started to evolve traits that allowed it to better survive space travel and different planets. It slowly propagated to the outer rim planets in its solar system. By this point it had adapted to have a rather wide tolerance for planets and started launching into deep space.

In deep space the adult slowly sacrifices itself to protect the spores and get them to their final destination.

The space faring creature is a large tree. It grows so tall, it extends past the atmosphere. Eventually reaching beyond geostationary orbit. It could shift its mass and pull up its roots to leave the planet below. Once in space, it could steer itself with leaves that act like solar sails.

Your critter reproduces via very lightweight, mushroom-like spores. It produces many. These spores drift high into the atmosphere and then leave the atmosphere into space via manipulation of electrical charge - they accumulate charge via radiation and then are repulsed by the earth's charge. Spores drift until intercepting the orbit of another world, then drift down and hope for a fertile substrate to begin growth.

This method would work less well as distances or radiation level increase.

If this creature did evolve in such a way that it could propagate off of a planetary body into space, the chances of its survival seem pretty slim.

Since it would require a very specific environment to influence its evolution as such, then only planetary bodies with similar environments would play such a host. The chances of these planets being close enough together, in a high enough concentration to constitute a sufficient breeding ground is probably fairly low.

Then there is the problem of surviving the vacuum of space. Is there any known organism that can? Only ones I know of are the ones that hitchhike comets, but they aren't really in the vacuum, but trapped within the comets ice.

I didn't realize some microbes can survive Space's vacuum

6 Organisms That Can Survive Travel In The Vacuum Of Space 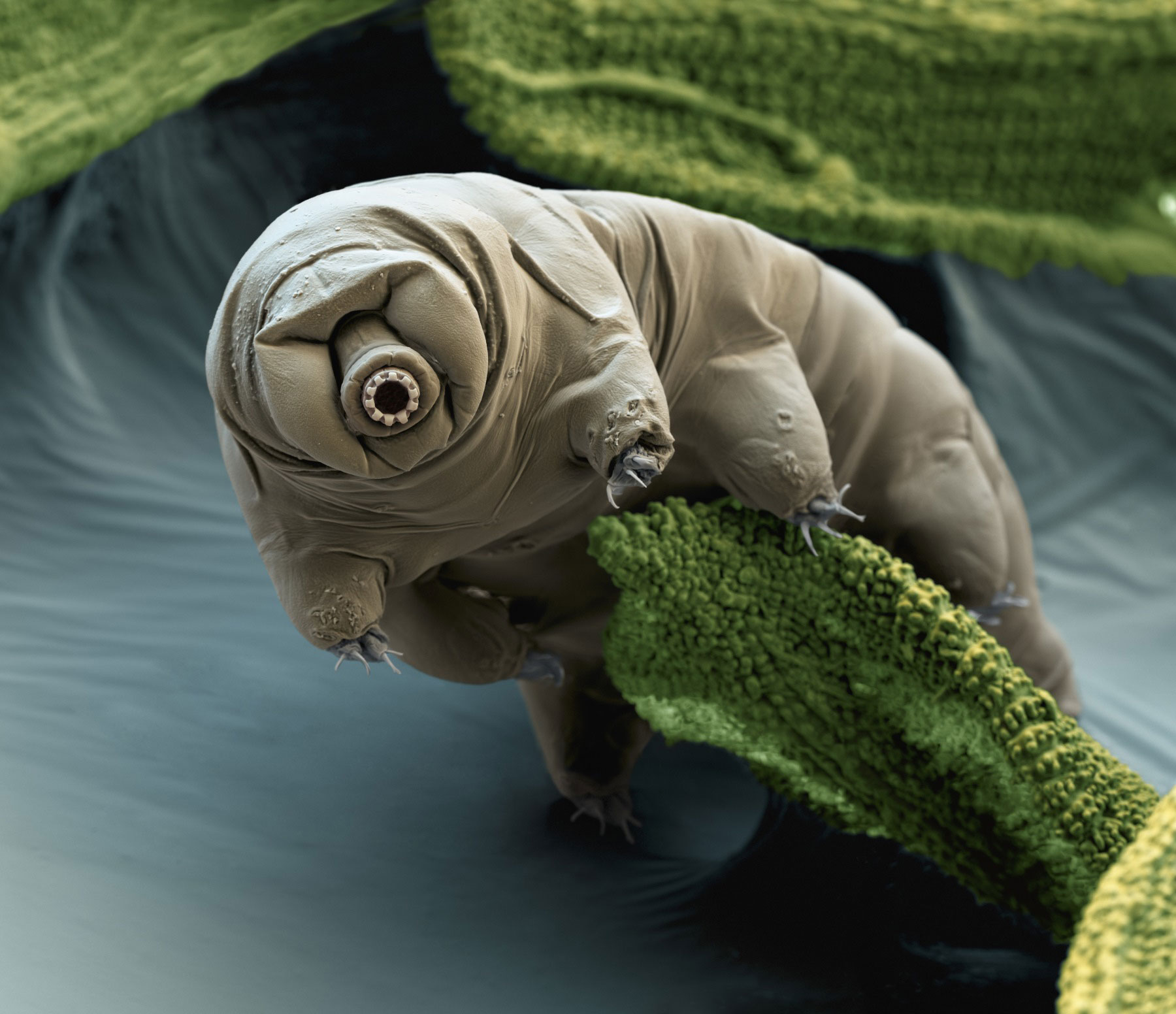 The creature excrete, as byproduct of its metabolism, a significant amount of hydrogen. When laying eggs/spores, these are attached to a balloon-like structure, which is inflated with the hydrogen excreted by the mother.

The structure of the balloon is such that it will be elastic enough to withstand expansion of the gas with increasing height and to tear in small holes in space vacuum, providing a short propulsive momentum by the ejected gas.

The remaining of the balloon act then as a solar sail to propel the egg/spore further in space.

Your creature needs to accomplish two things: 1) escape velocity and 2) survive the harshness of space, all without the benefit of so much as a sharpened stick or flake of rock. This is going to be difficult, but not impossible.

For #1, I think you are going to have to start out with a low gravity for your world, in addition to the specialized characteristics of the creature. It might be able to get to escape velocity with a pair of mega-grasshopper-like legs to jump into space, but clearly, flight is more likely. I found this interesting article at Audubon discussing how peregrine falcons, common swifts, and free-tailed bats have been jockeying for the title of "Earth's fastest flying animal." No matter the winner, what they share is a light, streamlined body and long, thin wings. The fastest flying insects- dragonflies- have a similar body plan. Your creature will need to borrow this shape, able to accelerate itself through your world's atmosphere fast enough to overcome its reduced gravity.

For #2 things are much harder. Most familiar animals, including us humans, don't do well in outer space. Without a pressurized suit, our body fluids boil, and even with one, radiation will get us sooner or later. Plus, said suit is technology, so clearly not allowed here. But there are creatures that can survive- they are called tardigrades, or more commonly water bears.

Unfortunately, the body plan of the water bear is vastly different from our fast flyers. They are tiny, stout, not at all streamlined, and lacking wings. However, your creature can adapt the mechanisms of the water bear, able to turn off its metabolism and go into a state of cryptobiosis. The animal essentially puts itself into "suspended animation" until it returns to a hospitable environment.

I think your creature would need to remain quite small for all of this to work, however, probably only a centimeter or so in length. In other words, I don't think you can meet all of your goals in one creature without a lot of hand-waving. But you can get part way there with some reduced restrictions.

Other answers have some great points about the vacuum of space, so I will not get into that.

But what if you have a low gravity world? Then find some way to create a tether for a space elevator. Well, a very simple one. A world tree with the top into the void is a good start. (I think you need some hand-waving here) Then just climb onto the rope till you get flung away. You will want something to guide you along it for some more momentum, you are gonne need that without rockets.

That just leaves you with the tricky part of timing for travel between planets.

Not the answer you're looking for? Browse other questions tagged science-based creature-design space xenobiology life or ask your own question.

9
How big would an amorphous blob have to be to toss part of itself into orbit?
1
How would a highly mutagenic (or shape-shifting) species have to adapt physiologically to achieve space travel?

17
Interstellar commerce: why would planets be valuable?
5
How could a creature move through space realistically without any additional technology?
19
How would a massive space creature evolve?
10
How would a sentient planet work?
4
Could a creature discard its skeletal system to function like an octopus?
1
How big would the “Eclipse Region” of the given planet be?
13
Interstellar combat without instant FTL