Are genetically engineered dogs that snap and become disloyal plausible?

I am imaging a world in which a minor plot device is that there is a strain of dogs that were genetically engineered so that they are even more loyal than ordinary dogs at first, but at some point in their lives, either due to a triggering event or just the passage of time, suddenly flip. Then they become not just not loyal but actively traitorous - biding time until a good opportunity to maximally betray its master comes along.

This trait may have originally been introduced in order to assassinate foreign leaders and terrorists, but, when engineered dogs bred with other dogs (sometimes undetected), this trait spread and is now present in some small percentage of domesticated dogs in much of the world.

Is this possible or realistic? Are the examples of existing animals that behave in this manner or something similar? What triggers might make sense for such a trait?

Note : this answer assumes the classic "alpha/beta males" behavior of wolves. After a bit of researsh (thanks DonQuiKong in another answer's comment section), it turns out that this is not how wolves behave in the wild. Assuming that the seed of this behavior is probably somewhere in the wolf/dog DNA and that the question aims for a story, using this trope as basis appears safe enough to me.

Like other answers already mentionned, the instinct is kind of already there. Let's see how it can be modeled to act like you want it to.

What makes a dog loyal? It has a strong pack instinct.

What makes a dog loyal to YOU? Because it sees you as the pack leader and it can't think of a reason of a way to overthrow you. It's fine as it is. Which I assume (not being a dog history expert), stems from the fact humans selected the most submissive kind of dog to when they started breeding them. This last part is based on my own personal (and limited) understanding of dog psychology. If this doesn't make sense, I'm afraid my answer just won't make sense.

So what about your dogs?

Picture a dog engineered so that at some point in it's lifespan, it wants to be the leader, and it will. With just a few other changes in the dog's psyche, it essentially becomes a wolf that really wants to be the alpha male. And you are in its path. This gives us an easy explanation for why the beast wants to betray you.

Here's the first effect of the genetic modification : at some point in it's lifespan, the beasts gets incredibly dominant until it's instinct dictates that it must be the alpha.

About betrayal : how can the dog do more than just beat you up and run away

Our hypothetical dog wants to kill you (or at least that you submit to it), but it will probably just wait for an opening, beat you up real good and take the lead. At this point, we basically have an uncontrollable animal. This is probably not quite what you have in mind when you say betrayal, which is why we'll use the genetic engineering to change this.

So let's make the dog more subtle, it wants to stay close to you and cause trouble until something else kills you. This dog is patient and more methodical than your typical beast. The modifications that caused the surge in dominance also causes it to avoid confrontation with it's alpha until it's too late. This dog can actually understand playing a role and social manipulation.

Here's the second effect of the genetic modification : the beast gets unnatural intelligence (for a dog). It instinctively learned in it's submissive phase to play sneaky with it's peers. So much that to an extend it can even get close to understanding how humans thinks and work in society. This also causes it to avoid confronting the pack's alpha directly. It will play the part until you need his help and take the mantle of alpha. After all, why would it take a fair fight if it knows how to avoid it?

This behavior would probably not be good in the wild if it was widespread. But if we accept that genetic engineering is in there, it doesn't need to make sense from an evolutionary perspective.

I met a golden chow mix one day. I love dogs and I'm pretty good at reading them. He was wagging and happy to see me, but that was the golden talking. The other side of his nature was chow, fiercely distrustful of outsiders and prone to attack suddenly. The minute I got within two feet of him, a change came over him. He was no longer happy to see me. He lunged and snapped. His owner apologized profusely and explained: he really was happy to see you till the moment you got close.

The temperament predilection of different dog breeds has been cultivated for thousands of years. I could see how with a little advanced biology a trigger could be implanted causing a dog to go from faithful companion to terrified and vicious.

I refuse to believe that the dog could be capable of malice and foresight though. If you want that, you'll need to go with a cat.

Well, this is what wolves do. After being loyal to the pack leader, eventually a mature wolf will challenge the aging alpha for top spot. Can be male or female. And since most wolves would have been born into the pack and only the alpha pair breed, the challenger is invariably an offspring. 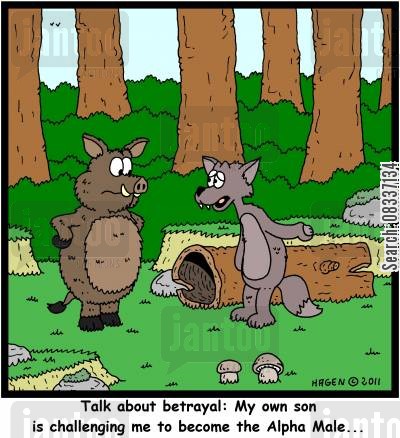 It's actually a genetic thing already.

Not the answer you're looking for? Browse other questions tagged reality-check biology genetic-engineering or ask your own question.