What type of ship with medieval times tech and Magic (explanation follows later) can go underwater and ram other ships?

And how can you get air into the extra useless organ so that your crew won't suffocate? I don't really want to rely on Magic to make the air fresh again, and I don't want to have to surface every ten minutes.

Would it work for the leviathan to be able to have an organ that takes oxygen out of the water and put it in a spot that could be accessed by humans riding in this thing?

Magic is a second life source. If you run out of it you die.

The less Magic you have the weaker you get. In this respect it is like a second stamina.

They way your body checks if it is physically strong enough to do something is as follows:

When you use Magic that changes as follows:

Magic has two ways of doing something:

If you were to light a few sticks of wood on fire and you wanted to do it with magic, you could:

Some spells can be both, but some are only on impact.

If you send a spell to paralyze your enemies (make them unable to move) there is no way, unless maybe send a spray of paralyzing poison toward them, to do it on release.

Everyone in this universe has Magic. Some people produce more Magic than others. This is the reason that few can do great feats of Magic, though if they knew how, almost anybody could conjure a candle-flame.

Another thing that you need to know about Magic is the use of it. Special words, the Olde Tongue, were linked to the usage usually, but not always. The words just helped you to focus and ‘stay on target’. These words helped magicians to focus on what they were doing and not get lost in the process.

So what I'm asking is would the leviathan thing work, and if not, what will.

Leonardo da Vinci not only invented a submarine, but also a diving suit. He was inspired by the idea of selling the invention to the Serenìsima Republic Vèneta to protect the all important Lagoon from invading ships, particularly Turkish ships.

“The Great Turk having besieged Venice, the lord Leonardo Da Vinci, at the head of his soldiers, cried out to him: ‘Surrender within four hours or you will be sunk!’ Yet after four hours, the said lord, the Great Turk not having accepted to surrender, sunk his galleys without the latter’s realizing how! And it was a marvel to behold the Turkish vessels sinking into the water with their oarsmen and their cannons, and to hear the cries, curses and blasphemies! The armies of the Serenissima captured many prisoners, and after the battle, the said Leonardo was carried on their shoulders, causing the pride of the Italian nation, and the said lord was greatly honored by the Serenissima, for having been the savior of Venice, and they gave him, as agreed, half the ransoms of the prisoners” 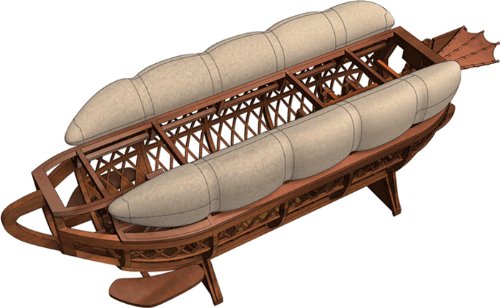 A brief description of a model of the submarine is here, which also gives you some idea of how the device was supposed to work. I suspect that Leonardo would have experimented with his design, and possibly combined other ideas (such as the spring power mechanism from his car) in later versions to improve its performance. The one possible sticking point is the huge inflated air bags would have created considerable drag underwater, and beyond a certain depth, water pressure would have collapsed them, depriving the boat of buoyancy and the crew of their air supply.

While I am not aware of anyone attempting to replicate Leonardo's submarine, there have been television shows over the years where other inventions have been replicated, ranging from his tank to parachutes to a diving suit. In virtually every case, the designs worked, telling us 500 years later that Leonardo understood the principles of the devices he was designing, and that with sufficient support, it was quite possible that the City-States which hired him actually could have outfitted themselves with primitive armoured forces, Underwater Demolition Teams and other innovations we normally associate with 20th century warfare. 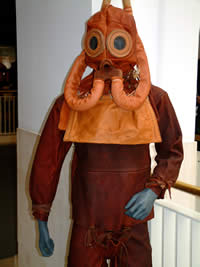 Not a big fan of explanations of burning sticks that have nothing to do with the question. Swim bladders, if the leviathan was a big fish, would answer the first part of your question. The Wikipedia article on Swim bladders might help you in this regard.

How do you control it? Well, that's an enormous problem (no pun intended). Generally, domestication benefits the animal by easier food access, protection from predators, and shelter, increased chances of reproduction, etc. Even if you could send electrical signals to its brain or fins to change direction, unless those changes led it to food or a mate (or perhaps "nicer" water, whatever that means) you'd be fighting it every step of the way (every stroke of the way). You need to be able to train it to tolerate you and have a reason to obey your commands. Maybe it needs a hard to find nutrient, which you can provide for it.

In reagrds to the system of vision, I see no way. If you could keep it on the surface, then a system of tubes and mirrors might be created (Middle Ages are ~1000 years. Mirrored glass was available by 1300 CE, and even before that polished metal could have been used.) A system of levers, pulleys, gears, etc. to keep the optical path from the surface to the observer could be possible, but would probably require magical surgery to install (and keep it antiseptic throughout the procedure).

How would you keep it on the surface? By definition, a leviathan is a deep water beast. You'd need for it to be smart enough to follow directions and the problem with that is, that in an ocean, asking for it to travel between points A and B on a map would be like asking a 18th Century wagon driver to plot a trajectory between Earth and Mars - not at all plausible.

So, what could you do? Say it can sense magnetic fields, so it can travel North, South, West, East etc. You'd need to surface to locate using an astrolabe, because currents would make it difficult to determine speed (hence how long to keep to a heading). Smells and sounds might help it recognize where it is, if it had been there before. And of course, perhaps it could follow a ship, assuming the ship made distinguishable sounds.

Not the answer you're looking for? Browse other questions tagged magic medieval ships or ask your own question.

26
How to make Rune-Based Magic interesting?
3
I need a huge castle that can hold of vast numbers off invaders, there is magic, medieval tech
1
In a world based in the 1700s, is it possible that someone created tools to aid or utilize magic?