What's the most appropriate magical beast that guards can handle to keep people quiet, like a creepy watchdog? [closed]

This beast has to be fairly common, is trained to listen to people, maybe whistle commands, can't be too big, from the size of a poodle, to the size of a mastiff, can't be to smart, has to be inside the laws of my magic. Some tiny dragon type might work, but need cool name, and what it breathes if anything, fireball, ice, lightning bolt. The tech is medieval. Creatures have to be able to fight in close quarters, preferable not with wings.

Magic runs in your blood. It is a second life source, if you run out; you die. The less you have the weaker you get, it is also second stamina. They way your body checks if it is strong enough to do something is it checks if your body has enough energy, and magic. The energy gets used up, but the magic doesn’t. Magic is different.

When you use magic, you don’t need energy. Magic has two ways of doing something; on release, and on impact. If you were to light a fire, let’s say, and you wanted to do it with magic, you could either send out the magic, still in magic form, and when you hit the pile of sticks, you can turn it into the fire. The other way is to make a small flame that shoots toward the fire and lights in when it hits.

Some spells can be both, but some are only on impact. If you send a spell to paralyze them, make them unable to move, there is no way, unless maybe sending a spray of paralyzing poison toward them, to do it on release.

Also, everyone has magic. Some just produce more than others. This is the reason that few can do great feats of magic, though if they knew how, almost anybody could conjure a candle-flame.

Another thing that you had to know about magic is the use of it. Special words, the Olde Tongue, were linked to the usage usually, but not always. The words just helped you to focus and ‘stay on target.’ These words helped magicians to focus on what they were doing and not get lost in the process.

I don't think you actually need to resort to magic, unless of course you absolutely want to. Of course you can add appropriate magic to any of these if desired (and allowed for by the rules of magic in your world). As you are asking about a magical creature, I suspect that magic is not limited to humans in your world; as such, it shouldn't strain suspension of disbelief too much adding magic to something like one of these, or you can base your creature off of one of these.

You say that you want something dog-like, in the size range of a poodle to a mastiff. Well, there are plenty of dogs that might fit the bill, particularly if actively trained for the work in question. Livestock guardian dogs provide a nice starting point, and the Wikipedia article has a pretty long, but likely not exhaustive, list of breeds.

Allow me to introduce you to the Anatolian Shepherd Dog: 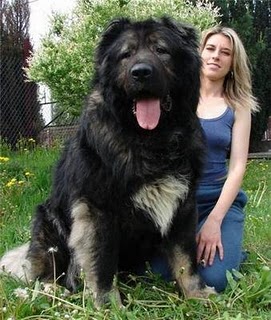 or the Great Pyrenees: 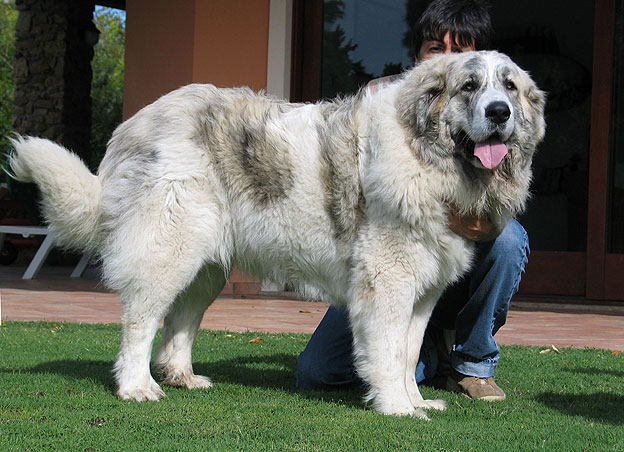 or any of several other breeds, many of which are bred purely for function and/or are recognized as purebred only by national kennel clubs, not internationally.

Livestock guardian dogs (LGDs) have been bred, often for thousands of years, to protect livestock against predators such as bears, wolves, and large cats. While much of the work they do is simply about being there (not many large cats are going to go teeth to teeth against a large, confident dog that stands its ground just for the possibility of a meal; there are easier prey), a hallmark of a well-bred LGD is that it also has the capacity to physically engage the predator if needed. As a consequence of this type of work, broadly speaking, LGDs tend to be bred to be wary of strangers, large but not extreme in size, physically strong, but also agile and not overbuilt, all of which are characteristics that you might want in an animal to be used for the purposes you describe.

Add a bit of directed breeding for willingness to follow commands from the handler (most LGDs are bred to work relatively independently, not like the dogs you see commonly which have been bred to work in close cooperation with the handler), as well as some specific training for how to bring down a human (read up on Schutzhund training, and look for videos on Youtube; there are plenty of videos showing the capabilities of "lesser" dogs, so you could just scale up a bit based on the breeding purpose of these dogs and the methods legally available to the guards), and you have a pretty formidable four-legged helper for the guards. By giving each guard party anywhere between two and a pack of these dogs (the number would probably depend mostly on how many guards there are in the party and how large groups people tend to form, the two of which are likely related), the dogs' mere presence (and the peoples' knowledge of what the dogs are capable of) should be enough to keep most people calm already, and the dogs certainly should be able to help the guards break up a brawl if needed.

For extra effect, if your society allows that, consider doing regular shows where a few people who have been convicted of serious crimes are given a close-range weapon (such as a knife or dagger) and a few of these dogs are pitted against them. Think something similar to the old Roman games where humans were pitted against wild animals. If the humans survive the encounter, they are free to go. There could even be a voluntary aspect to these; basically, you either take your chances against dogs and might end up dead or might end up free; or you are sentenced to life in prison. Now tip the scale ever so slightly in favor of the dogs -- you might send in one or two dogs more than you think you need, have the dogs commonly wear protective vests, spiked collars (the real stuff, not those just meant to look good), or whatever you prefer. Allowing or even inviting the people of your world to watch would give the -- hopefully large -- proportion of the people in your world who aren't likely to become major troublemakers an idea of what the dogs can do even to someone who is prepared and knows what to expect. There's nothing like a little psychology in the morning to keep people in line!

It is not alive so it has no fear and no pain. It can be as big or as small as you want to make it. It does not talk. It does not want. Destroying it requires the undoing of the magic holding it together, as its materials are impervious to harm.

One or more golems could be made as necessary. A new one might be made for each patrol and allowed to revert to earth when no longer needed. Or the guards themselves might make use available materials on site to make a golem to help them as the circumstances warrant.

Perhaps the guard could have a cynogryphon, de-winged as a whelp and trained to attack. That way, it'll have sinister eagle eyes and talons, and shriek like a bird of prey, but be trained like your average guard dog.

A go to standard in DnD is a direwolf. They are intelligent (for a wolf) and sentient food is only a preference, not a dietary requirement.

My personal favorite though would be a shape shifting animal. In non-combat form, it looks like a little yappy dog (or a kitten). In combat form, it grows into something slightly larger than a tiger. They should be given names like fifi or fluffy. Then you get to see the reaction on the faces of outsiders and the see the local riffraff clear the streets when a single watchman strolls down the street with a little yappy dog.

You can't beat a three headed dog for menace and trainability....

Given that it sounds like magic is commonplace the animal should have some basic adaptation to that.

What about a roughly cat/small dog sized animal with fur that has a series of urticating hairs. These would be tiny little hairs it can shoot out over some small distance. Maybe instead of causing irritation they can have a bit of a soporific effect. The thought there is that best way to control someone who can do some random magic is to be unobtrusive. Imagine a street brawl broken up as the combatants all just start to collapse and pass out, tiny creatures flitting about the feet of the gathered crowd or perched on nearby rooftops. Of course, maybe those are just the young of this species. The larger ones could have stiffer hairs that function like modified teeth (think shark skin). Just touching them would be like pressing your skin against a grater and would make them terrifying to fight in close quarters. I don't have a great name but this animal has some traits borrowed from antlions, spiders, cats, and sharks. Quillers, quillbacks, arlions are a few thoughts.

Ovtcharka, Caucasian Shepard Dog or Tibetan Mastiff. Both are huge aggressive dogs that can fight of large predators. A thug with a knife shouldn't be a huge problem. As bred dogs they're also easy to train compared to a wild monster.

Not the answer you're looking for? Browse other questions tagged magic creature-design mythical-creatures medieval or ask your own question.

59
Is there a credible way a shapeshifter could gain/lose body mass when changing forms?

179
How could dragons be explained without magic?
7
What Kind Of Operators or Functions Should A Magic Language Have?
3
I need a huge castle that can hold of vast numbers off invaders, there is magic, medieval tech
7
How can my dragons use their tongues to control their fire breathing?