How would the weather be affected by a constant miles-wide maelstrom?

There is a giant equatorial maelstrom surrounded by three landmasses sucking warm water down to the bottom of the ocean. Somehow, magically or some weird physical process I haven't fixed on yet, this warm water re-enters the surface polar ocean system in a giant geyser 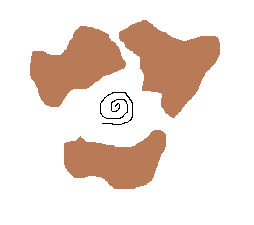 This Earth-like planet has a similar gravity, atmosphere (less oxygen), etc. but differs in that it has 0 axial tilt and is further from it's sun (red giant) but still close enough to have liquid water covering 65% of the surface.

I've read several posts here and elsewhere describing the banding properties of no tilt and have a fair concept of what climate would be like, but there's another variable that I have been considering that I have not been able to work out properly.

My idea is that in this world there is a maelstrom, a few miles wide, that has not stopped in thousands of years, only slowing or speeding up. Imagine the black hole eddies that have been seen in the Atlantic but on a much larger scale and that does not wander across the ocean but stays in one particular location. On top of this, through some magical or weird physical process this warm water is transferred to the other side of the globe and exits into a cold polar ocean.

Now if this was possible, and was in a made-up world filled with magic and with no axial tilt. How would this giant warm-water maelstrom and geyser into a cold water ocean effect the oceanic currents and weather?

You need a continuous, strong wind. The passate wind is okay for that.

You have to focus it with some mountains. Our Earth doesn't have a mountain system for that, but it would be possible. Around so: 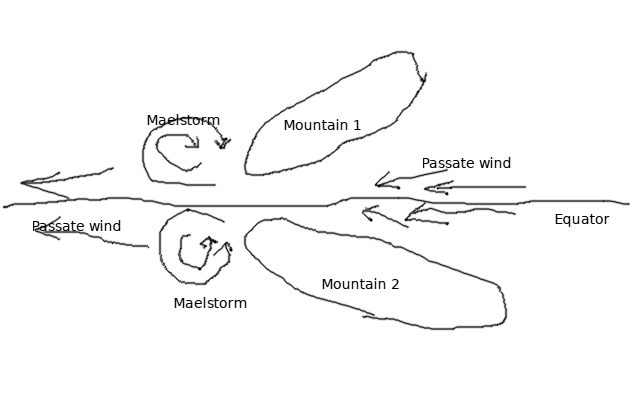 A standard maelstrom is formed by a mixture of tides, currents and underwater terrain.

Your "maelstrom" is not that and is essentially a much larger version of the vortex you would see in a sink or bathtub when you pull the plug. You basically have a humongous drain in your ocean. All currents in your oceans will eventually lead there.

The 3 channels between your landmasses will all be flowing inward, and depending on the flow rate out the "drain" the channel currents may be strong enough to prevent outgoing traffic.

Your geyser, dumping a massive amount of equatorial water into a polar region, will make the land near there much warmer than they would otherwise be (similar to, but more extreme than the Gulf Stream's effect on England).

Not the answer you're looking for? Browse other questions tagged reality-check magic earth-like climate currents or ask your own question.

5
How would a large arctic mountain range affect the weather?
12
Single biome (hot) desert planet, possible?
12
Would the tropic and arctic climate bands switch if the Earth's axial tilt changed to 60 degrees?
3
How can I explain the geography and climate of my planet?
6
What would happen to the climate if Earth's sea-levels rose 2000m?
3
Climate checking my map
0
How Can the Coastlines Look Similar In Spite of the Cooler Temperature
5
How to get rid of the rainforest for a desert moon with only habitable poles?
2
Does my climate map work?
3
What would the effect of a magical ring of ice around the equator be?