How can a race express an Expanded Sense of Time?

Traditionally we recognize 5 Senses in humans, but in building an alien race for my world I wanted to go beyond that. This is the first in a series of questions. This one is: How can a race express an Expanded Sense of Time? What could the biologic advantages be?

Humans already have a sense of time, biologically, and we also cheat by using light. We can feel the passage of time, but are pretty limited.

I don't know if there are any animals that have a keener sense of time and I am not quite sure how that would be expressed. This isn't about being able to travel back and forth through time, I'm just looking for the biologic sense of time and how that works, and how it can be expanded to build a race more attuned to it.

Our perception of time is primarily based on chemical cascades which operate with a clear resonant frequency.

We have language to describe the femtosecond realm, where we capture light in-transit, such as this apple lit up by a pulse train of different frequency lights: 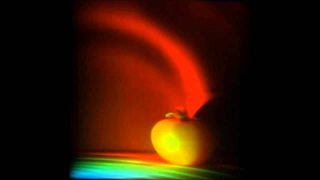 We have words to describe the concept of the origin of the universe, and the inflationary period which appeared after it: 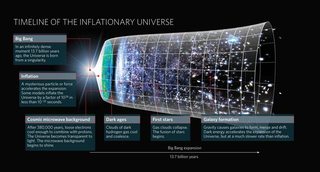 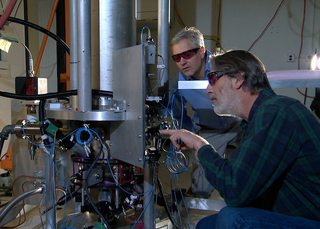 Our sense of time is quite fine tuned indeed!

However, one interesting place you might explore for your aliens is a distributed concept of time. Much of our ability to express nuanced concepts of time is based on having one "master" clock from which all others derive a reference. The challenge, of course, is how to synchronize to this clock. Your aliens might develop a strong sense of time before the hardware/wetware to synchronize to a single clock. In such a world, you would want to have a distributed sense of time. Very few parts of humanity have to deal with distributed time, so we have very few tools for it. The two most famous ones I am aware of are Vector Clocks and Lamport timestamps. The former is very powerful but hard to implement, while the latter is easier to implement but not as strong.

With such a distributed system, you would find the need to be able to express events which occur at different times, or even in different orders, according to the observer. This would create a lot of room for interesting language choices!

Not the answer you're looking for? Browse other questions tagged biology science-fiction science or ask your own question.

98
Would intelligent life evolve any other body plan than humanoid?
3
Evolving an intelligent avian race with a human-like appearance
6
Biologic advantage of magnetoception
8
How might a race with high equilibrioception & proprioception interact and perceive the world around them?
2
How would living underground (bioluminescence) affect a humanoid race?
3
Express Pregnancy: How fast can a mother's body adjust?