Can a small island realistically have all these environments?

Would it be realistic for a (relatively) small island nation to have these features:

How large would this island have to be in order to have all these enviornments?

I am imagining this island to be not far off the East coast of North America, but its exact latitude is flexible. The nation was mostly settled by European explorers in colonial times, but is now an independent country. Its main exports are technology.

Forests an be pretty much anywhere; there are lots of different types of forests. Having a forest and desert on the same island is pretty easy too. The island of Madiera (in the Atlantic) has a semi-arid southern coast, and a wet forested northern coast.

The key to this wet/dry divide is for the island to be in a cold current around 30 degrees north or south. Prevailing winds hit the one side of the island and deposit moisture, while the cold current reduces cloud formation over the dry side of the island. The Hadley cell providing dry descending air will complete the picture. Madiera is only 801 km$^2$, about the size of Singapore, so this effect can be prominent in a dry island. There isn't a cold current off the coast of the Eastern US, you can see here, but such an island could exist off Western Australia, Baja California, Peru, Angola, or Morocco (which is where Madiera is).

Cities can go pretty much anywhere, and are pretty straightforward. You can look up city sizes on Wikipedia to see how big a city will be for a given population.

The moist adiabatic lapse rate is the rate at which temperature drops off with altitude and is about 5C / km. If we take Madiera as an example, the capital (Funchal) has sufficient winter moisture for snow, and just needs to be colder. Since the daily mean is about 16.7C, we'd need to drop that by about 15-20 C to see regular snowfall on the top in winter. That means we are looking for mountains in the 3-4km range. This makes sense, since Mauna Loa and Mauna Kea at around 4205 m have snow on their summits a few degrees farther south on Hawaii Island.

What sort of lake do you want? The easiest way to do this is with a crater lake. For example Lombok has a 3700m mountain with a sizable crater lake on top of it. Lombok is about 4000 km$^2$, but any of those other islands with a comparable volcano could have a similar lake.

Your island must be at a minimum 2000 km$^2$, which is around the size of Maui, or a little more than half of Long Island. This leaves about 1/3 of the island to be covered in a city-state the size of Singapore, 1/3 to be covered in desert and forest, and the last 1/3 to be the steep slopes and summit of a mighty volcano, topped by a crater lake. 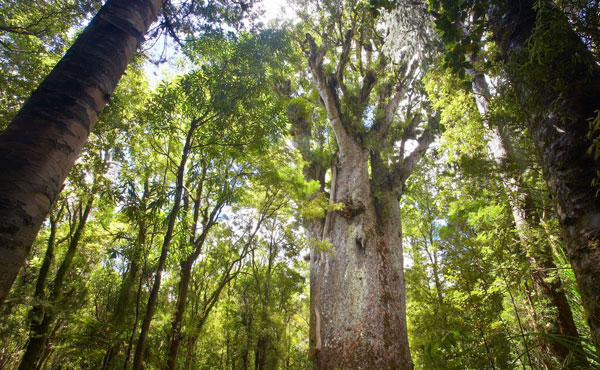 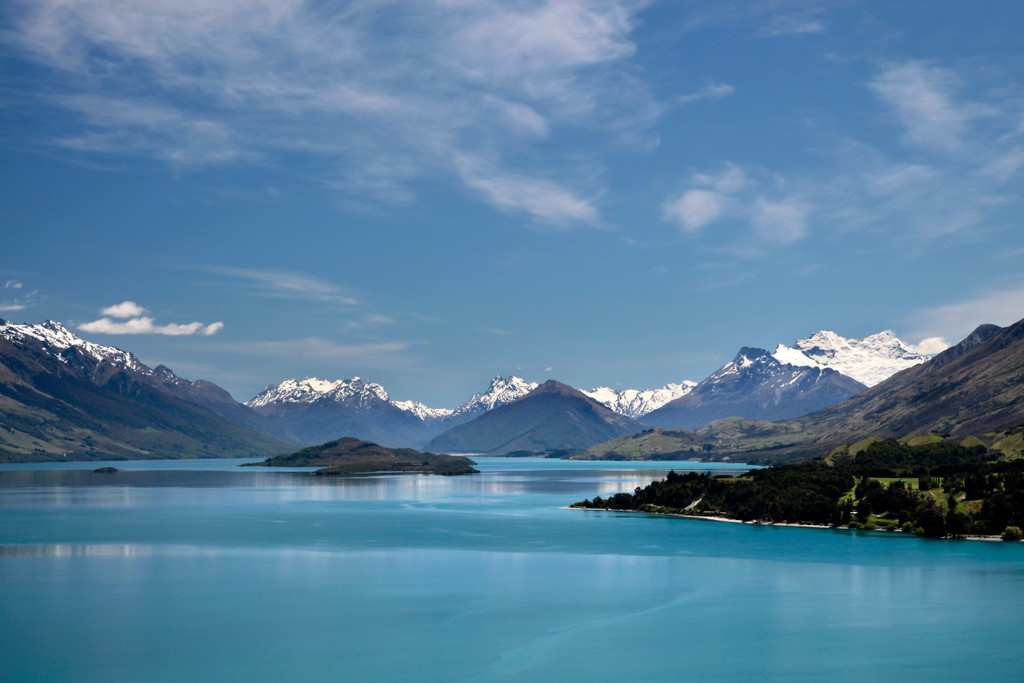 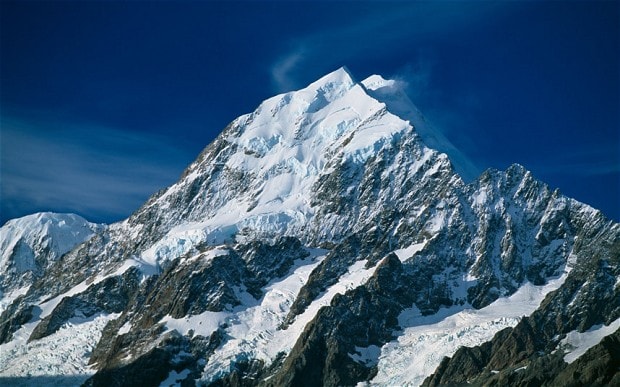 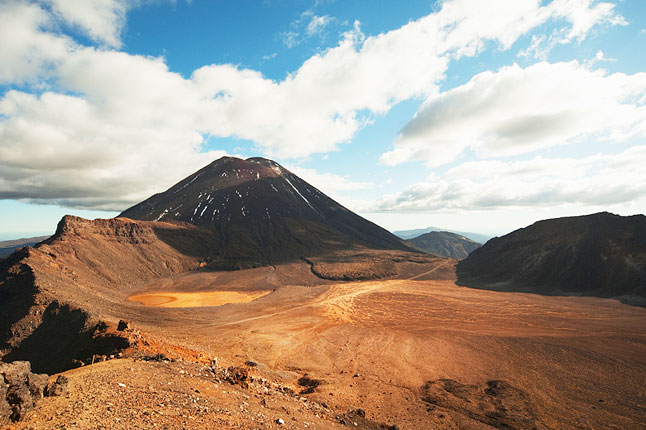 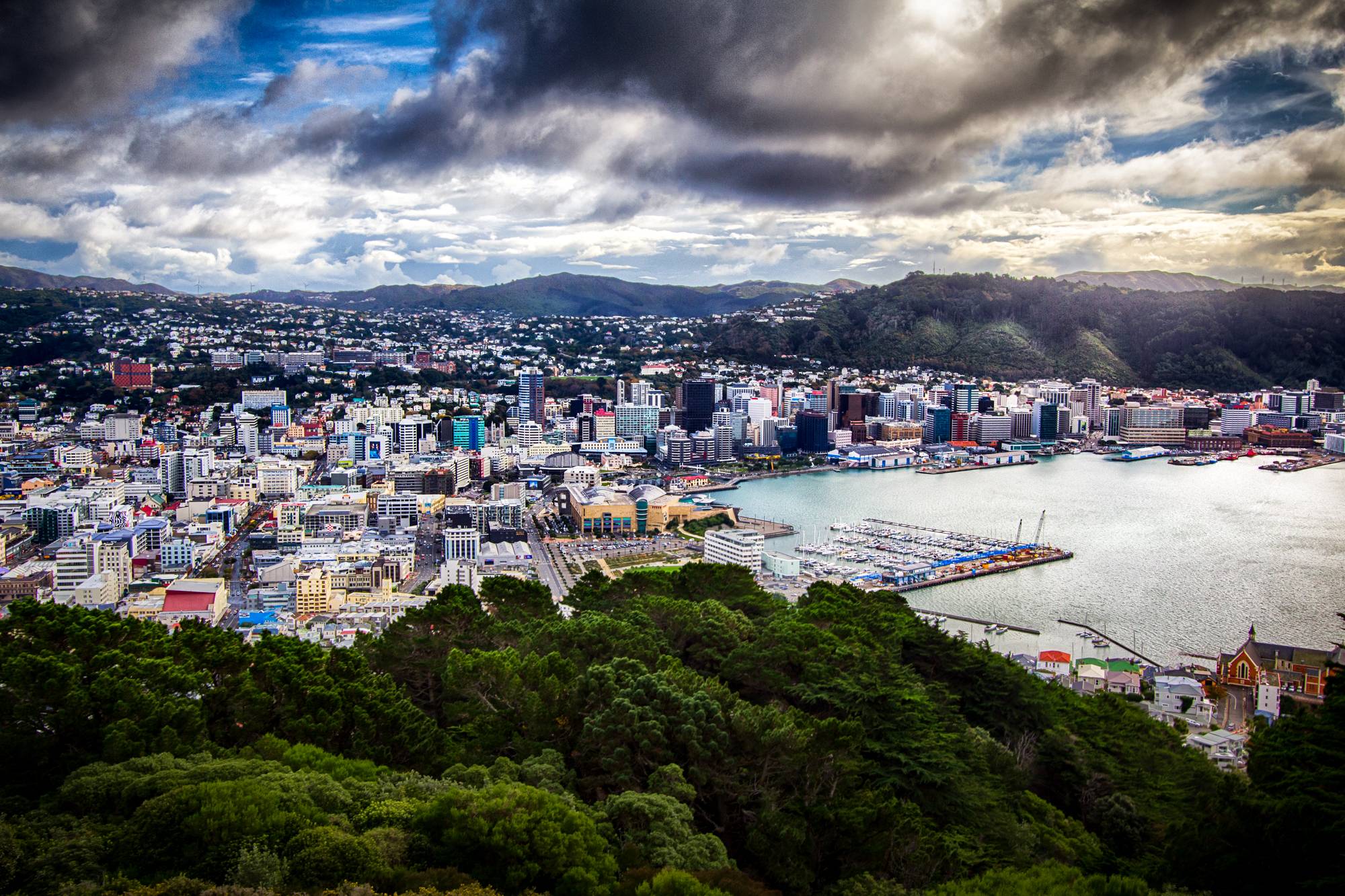 Here is a picture of how close together all the natural features can be. Note not all the examples above and below match. But here we see Rangipo (1), Lake Tapo (2), Mount Ngaurhoe(3) and the Kaimanawa Forest Park (4) all within about a 50km range. There is no reason a city couldn't be built within that reach. 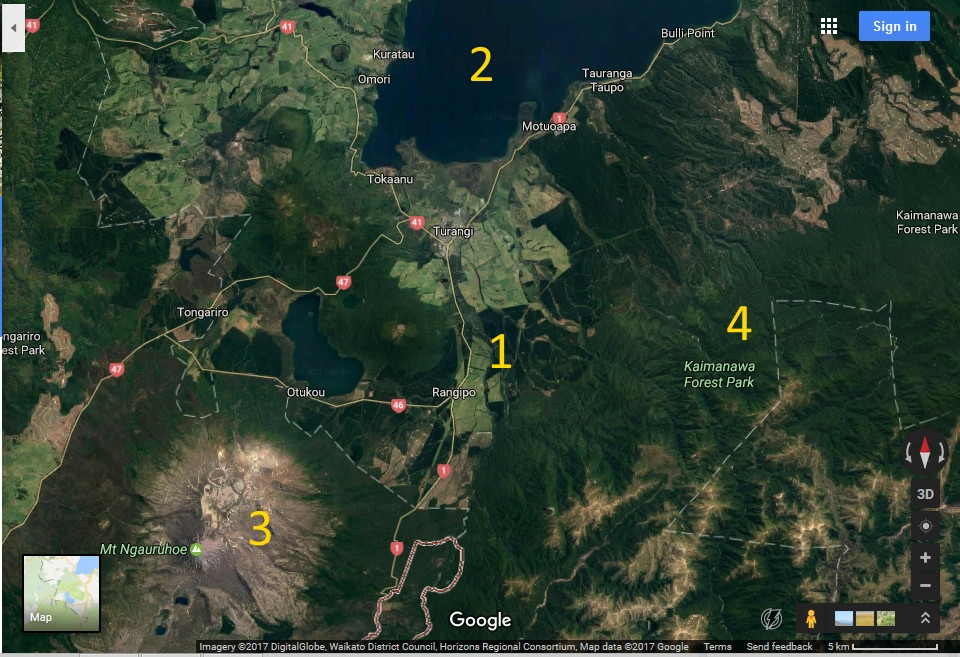 Examples abound. If we loosen up the requirements a bit for multiple environments, all that you need is an island with a decent mountain range, in a location with a strongly prevailing wind. The Olympic peninsula in Washington State is a rain forest on one side, and about 13 inches of rain a year -- not quite desert, but all the farming uses irrigation. A thousand feet higher would do it.

Vancouver Island is another example.

Note that a single peak will likely not cast enough of a rain shadow. Prevailing winds do have some variation.

Welcome to the "Big Island" of Hawaii

All five link are from Wikipedia.

It seems that volcanic origin is a necessary condition, especially to get the snowy mountain. The few lakes on Hawaii are also carved out by volcanism.

As for size, the big island is currently about 4,000 square miles (10,000 sq. km.) and growing, again due to the volcanoes adding land now and then. In its ancient past, it may have been only as big as the other isalnds, like Oahu at about 600 sqaure miles (1,500 sq. km.), and still maintained these features.

Not the answer you're looking for? Browse other questions tagged science-based environment earth-like landscaping or ask your own question.

36
Can a planet realistically have multiple suns?
16
Can these trolls exist?
27
What natural protections could a small oceanic island have against tsunamis?
6
Could elves realistically have tapetum lucidum?
32
If we can have “all the comforts of home” in space why would we settle planets?
12
How can Ganymede have an Earth-like gravity without us having realized it?
5
Can I have a forest in the rain shadow of a mountain range?
4
How can I have an Earth-like moon?