I'm writing a book about a man traveling on a Desert planet (colonized) and I need help with some of the species he might encounter there. I'm focusing on animals right now. I need to know what adaptations would be useful for daily tasks such as burrowing (Please note that tasks somehow autocorrected to Saskatchewan. I found that funny) on a planet like this.

The world is slightly smaller than earth, and slightly less gravity. It is covered in sand and strange formations. It is mostly populated by humans. There is a large oasis near the north pole of the planet. From there are several underground streams that surface as oases all over the planet. There are many large lakes throughout the north and they become less common and smaller as you go south. This causes the north to be more populated and richer.

My question is: What unique adaptations will animals need to survive in a desert environment?

The best way to imagine desert life on another planet (or any other type of life for that matter) is to look at desert life on earth. Desert creatures often have fleshy spikes, large ears, flaps and membranes to increase surface area to keep cool.

Plants on this planet would draw water from the underground streams covering the planet. Depending on the size and concentration of these streams, this may cover the planet in squiggly green (or whatever color your plants are) lines. So the logical way for the creatures to obtain water would be to consume the plants on this planet.

If plants are scarce on this planet, creatures could develop aggressive behaviors and adaptations to fight for food and defenses to protect from attacks. Camouflage, spikes, warning noises and a touch of bright poisonous color will be favored by smaller creatures to deter, while larger ones may have large, plate-like scales and hard horns or spikes of some kind. Creatures will probably have lazy behavior if a large herbivore and carnivores can may be patient and waiting ready to pounce.

If this planet is a desert planet due to it's proximity to its sun, then creatures may have adapted some way to turn light and/or heat into usable energy.

First off, deserts (as far as we know) are not conducive to the emergence of life. So the world would likely have been a lot wetter at some point. So, life would probably be adapted from creatures that lived in that wetter environment.

Also, there are many kinds of deserts. If you are talking sand dunes, creatures will develop ways of protecting their eyes and breathing from flying sand.

Some commonalities of deserts: water is rare. When it is found, you have to ask why the water is there.

Are there areas that get rain and there are underground rivers that approach the surface is some areas? If so, creatures will develop methods to sense and store water. They will also be likely to have thick skin/scales/shells to retain the moisture in their bodies.

Do creatures get their water from dew? Is so, plants will likely have "fuzz" or spikes that collect that dew and let it drip off the ends of the fuzz or spikes where the plant can collect it before it evaporates.

Because of the low moisture content of the air, deserts tend to be scorching during the day and near freezing to actually freezing at night. Creatures and plants must be able to survive these extremes. Some burrow to get away during the extreme times of day/night.

Unless there is water near by, prey will likely be few and far between. So, animals will have to conserve energy as much as they can while still catching enough to live.

Years of erosion and compaction can produce sandstone, which helps create landforms around our world's deserts, and to take arguably the largest oasis (Tamerza) of the largest desert (Sahara) as an example, I'll use to try to answer the question. This is Tamerza; and I'll use other examples that I've been to, to maybe highlight the human impact. I have to stress that an oasis is rarely just a spot on the ground: it is found in crevasses.

Besides the basis of bacteria and simple organisms, you have water and sunshine that allows intense competition among plants that will help establish an ecosystem. This is simplifying a lot of things, but might be useful for your story. 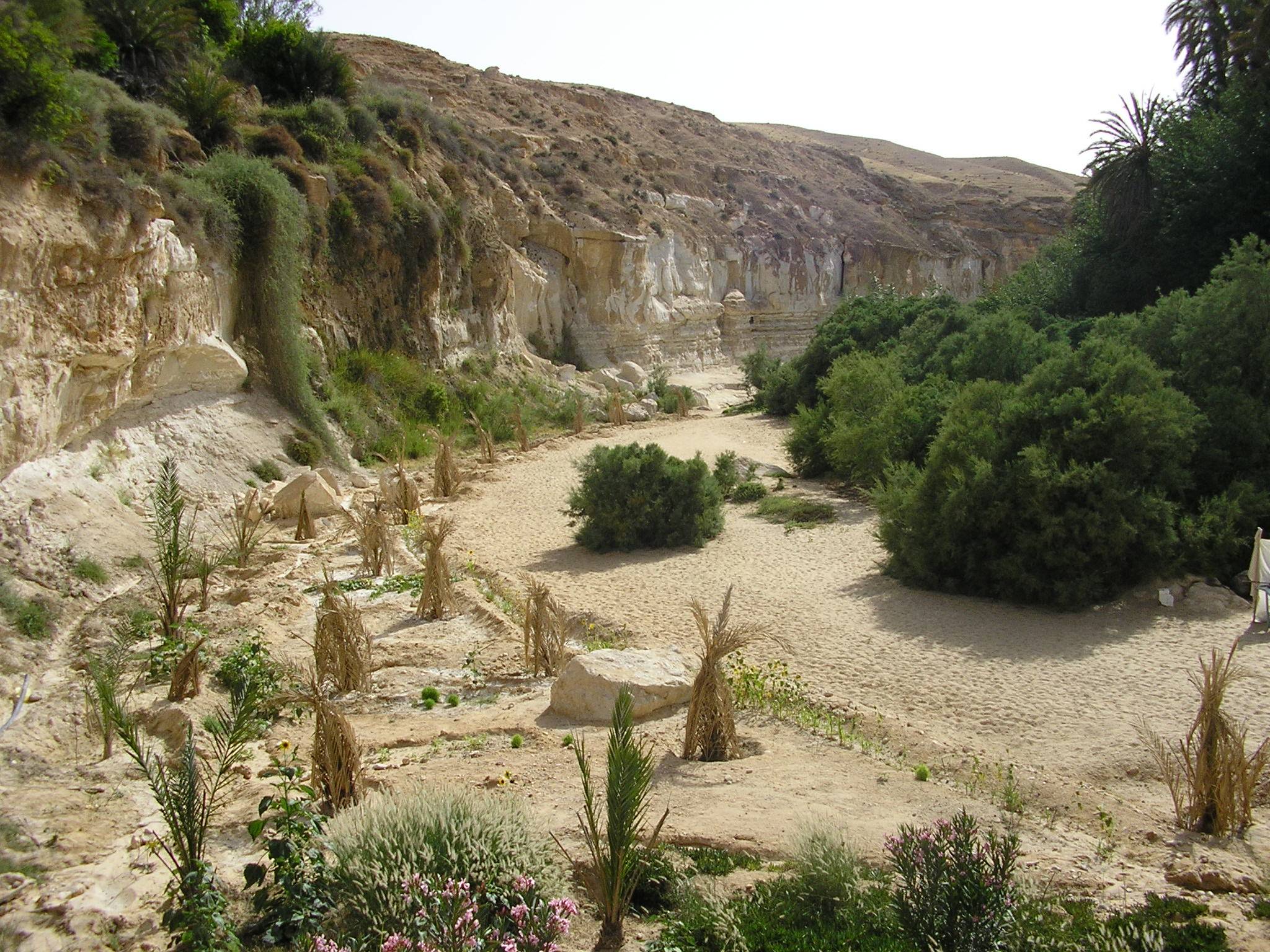 (photo in Tunisia - a little water can go a long way)

Another critical element to a system is the growth and arrival of insecta; again, I'm simplifying an enormous process, but this probably should be noted. They support your birds and small mammals.

I think these might be your best bet for animal life that is successful; a lot of highly developed animals can go a long way, but birds will be able to travel much farther, as evidenced by a number of bird species on Earth. Gliding high in the air allows for seeking the next oasis while avoiding ground predators for a long distance.

But you also want human development; I'll pull from the intense human development in the Gulf Region we worked on. There are a lot of silly developments that are just construction, but there are others where defensive architecture (that is to say, defensive against the arid, hot environment) could be largely successful.

In Ras Al Khaima, a proposal for a modern expression of local climate development was proposed (was not built, but it has its merits) against the wind and the sand:

You've a lot of real-life examples; keep your oasis protected by sandstone, keep your plants in competition; keep your animals both mobile and small; and keep your human architecture resilient against the elements.

Not the answer you're looking for? Browse other questions tagged planets creature-design aliens or ask your own question.

9
Could mammals and dinosaurs coexist as the dominant animal group?
6
Two orbits, Four habitable planets in the goldilocks zone?
2
What would a planet be like if it had no oceans, just large lakes? Would it be habitable?
9
Would it be possible for an Earth-like planet to have multiple moons with diverse biomes capable of supporting life?
9
How Would An Advanced Race Capable of Colonization Classify Planets
10
Could a deep ocean creature use some kind of bacteria in its body as a way to generate oxygen?
6
Super earth habitability
21
Would a carnivorous diet be able to support a giant worm?
3
Is it possible for a reptile to be amphibious?
19
I want ten Earth-years long day on my planet. Can I have it?