In a doomsday scenario, what would be possible transcontinental communication options?

The setting is present day Earth as we know it. No Magic, and no technologies which do not already exist.

Let's say there is all-out nuclear war and much of the existing infrastructure is destroyed. How do people communicate across different continents? Is e-mail still available?

I have this feeling that our infrastructure is incredibly fragile because it doesn't take but a small winter storm to knock out power, communications, etc. So I don't have a lot of faith in it.. unless of course, someone elucidates on this.

Short-wave radio. There are still enthusiast equipment in use, and each unit is autonomous, needing a local (individual) source of power.

Vintage machines can be repaired or built from scratch using relatively low tech: coils of wire and other discrete components. In 1921 or ’22 shortwave amateurs demonstrated transatlantic communication.

It will happen: after a fall of infrastructure, “ham” operators will be all over the air talking to each other. These machines are a fixture in fallout shelters and survivalist enclaves, and are in use in remote locations where phone service is not available.

People will find existing machines, possibly unaffected by any EMP, and need meerly to improvise power to give it a spin. These same remote locations and survivalist caches will have off-grid power systems, too.

It may seem silly, but semaphore (using flags to communicate) was a critical tool in Napoleon's victories. Semaphore towers spaced just at the edge of visible range allowed extremely rapid point-to-point communication across the entire continent of Europe. Within an urban environment, it would be even easier since they could be placed on taller buildings. Similarly, using something like Morse code with mirrors used to focus and reflect flashes of sunlight can be used over long distances, and signal lights can be used in a similar manner in the dark (which could be based on old-fashioned gas or wood lighthouses if electricity is no longer available).

Regarding continents, most continents are connected to other continents by land. You can go between Europe, Asia, and Africa across land, and between North and South America. Further, the U.S. and Asia are connected by an island chain. I can't find the maximum distance between islands in the chain, but at least the average distance is well within the range of these sorts of systems. Similarly, it looks like the islands connecting Australia to Asia are also either within range or close to it. So all the inhabited continents could possibly be connected by such a system (perhaps with a few anchored towers in water to bridge a few larger gaps).

Assuming the EMP from nuclear war doesn't fry all electronics (it won't unless specially designed EMP weapons were used) and you can cobble together power with solar or crank generation, radio is the best bet.

Most people are dead so the survivors can go pick through everyone else's stuff. Even if only one in ten thousand homes housed an amateur radio enthusiast, they've got huge antennas so they're not hard to spot. Getting the power converted to 110AC is probably the biggest problem. The easiest thing would be cobbling together scavenged solar. Panels are plentiful but they generate dc, so you need a transformer and some know how. One cool idea I've seen is using a washing machine motor. You flip the wires on the motor, turn the drum into a water wheel (or hamster wheel) and it generates power.

Keep in mind that radio is broadcast so anyone can listen in. And a mobile receiver can be used to triangulate the source of a transmission.

For land based communications in a post apocalyptic scenario, it is difficult to beat the mail service as pioneered by the ancient Persian Empire, later replicated by the Romans and even in the United States as the "Pony Express". Simply a series of roadhouses at set distances apart so messengers can stop and exchange horses or pass mail bags off the the next person in the chain.

Depending on just "how" post apocalyptic this is, the messengers and even the mail stops may have to be armed and fortified (much like stagecoaches had a shotgun rider, or trains had detectives or armed Pinkerton guards), and of course this does imply that the mailmen are part of a larger bureaucratic structure. Any post apocalyptic warlord who wants to extend their territory might actually consider putting resources into this project since it isn't nearly as resource intensive as invading armies and it buys goodwill among the people receiving postal service, making them much more willing to be allies for other projects.

Crossing oceans in a post apocalyptic setting is actually more difficult. The technology for building and sailing transoceanic vessels will have to be recreated (how many people use charts and sextants anymore when computerized displays and GPS allows accurate navigation by even minimally skilled sailors?), and of course you would be smiling into unknown shores (are the ports and harbours operable on the other side of the ocean? Who owns them now? Do you have to send a lighter ashore to figure out who is there?)

As mentioned there may be remnants of the old systems like ham and shortwave radio still in operation, but the industrial capacity to build and extend that network may be lacking (drawing wire is still needed to make primitive radios, for example).

For a suitable range of distances, homing pigeons have a long and distinguished history of service, even making a significant contribution in World War Ⅱ. 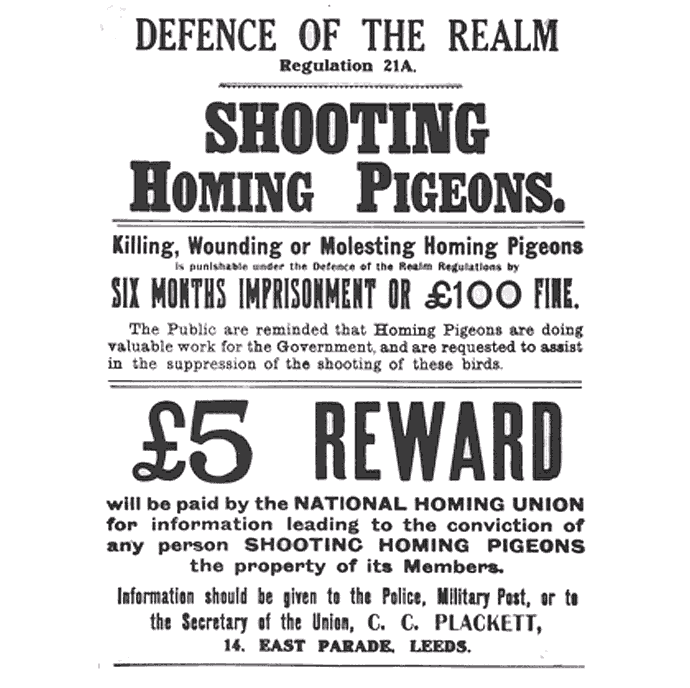 If people have some working computers, they can combine old and new technology by sending microSD cards by homing pigeon. It’s interesting to note that even in the 21st century such transport can regularly beat the performance of broadband!

During the Franco-Prussian War pigeons were used to carry mail between besieged Paris and the French unoccupied territory. In December 1870, it took ten hours for a pigeon carrying microfilms to fly from Perpignan to Bruxelles.

Email and important files can be batched locally and sent on one microSD card, transferring hundreds of gigabytes of digital information up to 160 km each way in a round-trip route.

For long distance transit, it appears that stations would be needed every 160 km. It’s not clear how to train new pigeons on the route without modern transportation, though. Maybe they can go in groups and teach each other.

Now there are in fact migratory birds that fly truely vast distances, even crossing oceans and the tallest mountain ranges. People could identify suitable species and individual populations known to return to specific grounds every year. They can be trapped, have messages attached, and released to complete their natural behavior. 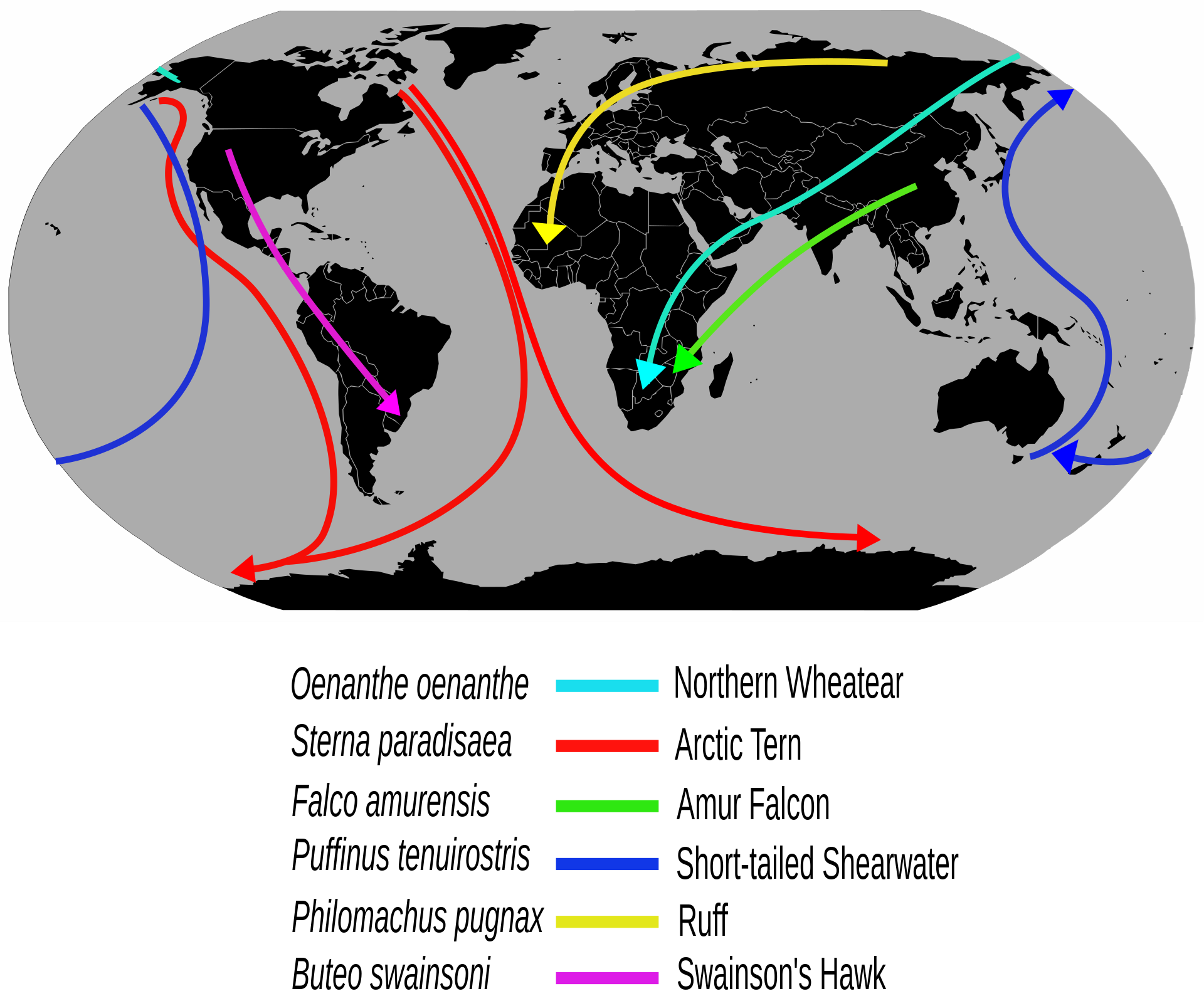