How to catch giant sea creatures?

One hundred years into the future, humanity colonizes the first planet in another solar system. A big ocean world! Yay!

But there is a problem: Most of the flora is toxic for consumption, so the only option is to hunt the animals for meat. Most of the aquatic animals on this planet can be used as food, but those animals are mostly leviathans, and they are very aggressive.

There are several species of leviathan. The smaller species are twice as big as Earth's blue whale; the largest is 6 times bigger [than the blue whale].

How can we catch these giants without major risks?

"You're Gonna Need a Bigger Boat"

Using the wise words of Brody "You're Gonna Need a Bigger Boat". You can't use anything too destructive or lethal to kill and collect your giant leviathans because you want to maximize food collection in what is already a risky process. The largest blue whales are around 100 feet long and 300,000 pounds. If the largest leviathans are up to six times the size of our blue whales then you're going to scale a modern day whaling ship up that large. Then to be safe since these whales are aggressive you're going to want to scale it up again.

How to kill the leviathan

My first thoughts were a poison to slow them down or incapacitate them, however we can assume that their system already filters most toxins as they live in such a toxic environment yet have edible flesh .You could use similar harpoon methods as we have with whales on our own planet. This would also be a matter of scale however I think that such a large aggressive beast would be tougher.

I would use submersible drones which would target a location above the animal's brain or other vital areas. They would latch on and begin to drill towards the vital area until death. This will allow you to remain situated a safe distance from this large aggressive beast. Drones can be retrieved during the butcher process and also act as a method to locate your food when it dies. This also allows you to potentially go after multiple targets with the ship just acting as a mobile butcher shop.

Forget boats - use helicopters. Or whatever the high-tech equivalent is in your universe. Read up on submarine-killer helicopters, and adapt some of their techniques to finding and killing your leviathans. Basically:

Or stay at home and use a 3D bioprinter to make steak?

No large animal can survive our extraordinary killing skills and weapons. The ordinary harpoon solution would work also in their case. Maybe it would need bigger ships. Building a little bit larger ships wouldn't be a problem for us. Actually the size of the whale hunting ships is determined by their container room and on-site meat processing capacity (essentially, they are also meat processing factories). They would be probably usable also in the case of the 6x whales.

The toxic atmosphere would result probably also toxic whales. It is unclear, what could be done with toxic meat. We could simply throw it out, and eat something non-toxic instead, but these newcomers probably don't have this option.

The whales have to eat something. Our whales eat krill, like this: 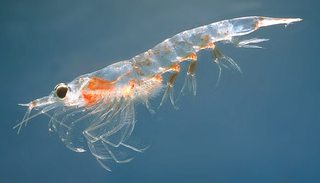 You have to find a way, what these whales eat.

The toxic atmosphere would mean probably also toxic oceans, it would make our task much more hard.

The newly arrived colonists probably don't have the building capacity to produce large ships on the spot (possibly before they get hungry). 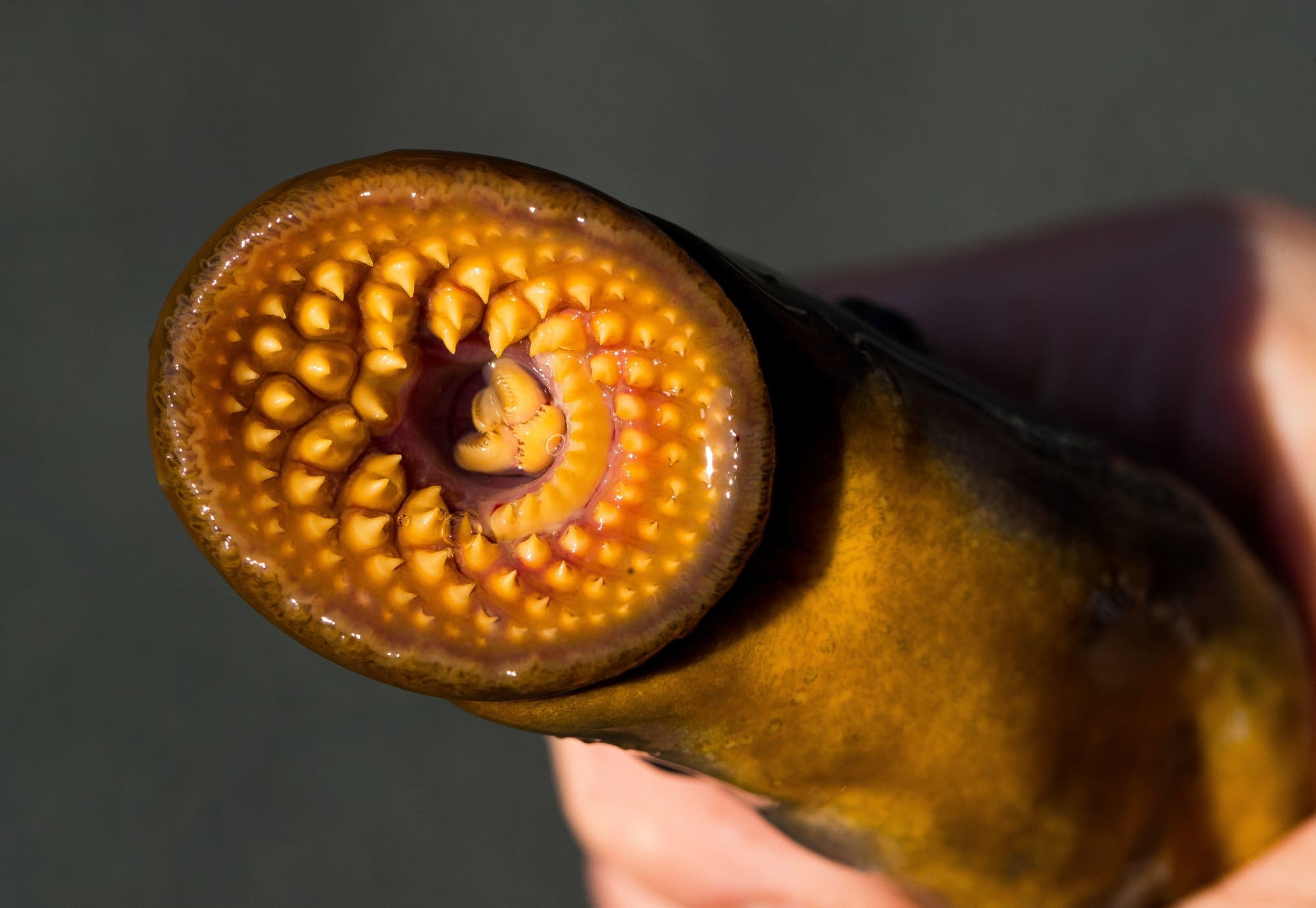 Catching something doesn't mean you have to drag it onto land. You said it's an ocean world - is there land?

No, you want to have a nice slimy submarine with sharp, grabby teeth. Not necessarily exactly like this lamprey, but I wouldn't dismiss this arrangement out of hand.

The humans probably stay in the submarine at first, enjoying protection from excesses of pressure as their host dives, and anchoring or burrowing against the shock as it breaches. (If protected from impact with the ocean, they should suffer no more acceleration than the creature does, and with its weight I doubt it can take very much)

Their food supply may consist at first, like the lamprey's, of ingested body fluids that may need considerable processing for flavor. Over time, they may learn to be bolder, carving deep into their whaley host in pursuit of the choicest muscles, carefully sealing off and sterilizing their tunnels to ensure they don't prematurely damage the organism.

With a little effort, they can learn to interact with the host's cellular differentiation process, sealing up passages through the muscles and body cavity in tough integument for easy blood-free pedestrian travel. Luciferins in the walls provide ample illumination, all thanks to the host's boundless metabolic energy. Modified flame cells provide fountains of purified hypotonic fluid to nurture the hydroponics along the corridors and the recreational field where ball games are played where the creature's mighty uterus once heaved.

What we do now but with more firepower. Fire a harpoon with an explosive head that also injects a lot of gas into the creature. That way, if you hit it in the right spot, you kill it, you make it buoyant so it floats and, if you are lucky and the harpoon stayed in, you have a tether.

If the fish never surface, use torpedoes instead of harpoons to carry the payload.

One wonders if these leviathans are just very cranky herbivores, or if they're preying on smaller, more abundant animals that might be more easily caught.

If you're determined to face such monsters, harpoons may work. Simple harpoons would be very risky, since they don't so much inflict mortal injury as let the hunters latch on long enough to tire the animal out. Basically being strung onto a very large, very powerful, and very unhappy creature is going to be dangerous no matter what kind of vessel you're in.

There is such a thing as explosive harpoons, which could do more damage. But even with our small earthly whales there's historically been some trouble with the dead animal sinking before it can be retrieved.

If you want to use an up-close attack, it will probably be best to go after young leviathans in some way, like orcas hunting a humpback. Depending on the species' reproductive cycle, this might also be a slightly more sustainable option, since there would still be adults left to reproduce. The only issue here would be that this would make Mama very unhappy, assuming she sticks around to raise the baby. The hunters would have to separate the baby from the mother.

Another thought: is the planet entirely water? If there are some landmasses, and if your leviathans use a whale-like sonar, or an eel-like magnetic compass, the hunters could conceivably create a device that could confuse the animal's navigational ability and drive it towards land, beaching it. When whales are beached naturally on earth, they become massive, readily available sources of meat for all kinds of animals. And there's some evidence that manmade technology may contribute to whales beaching. With your leviathans, this kind of hunting would let the humans hunt from a distance, conserving their resources, minimizing the risk to themselves, without damaging the animal or risking the loss of any part of it. If there are no natural landmasses, perhaps the hunters could construct some other large, reusable trap to drive the leviathans onto/into.

I propose an electrified harpoon. A shock of electricity will stun the leviathan. Once stunned the next step is to attach more electrified harpoons at the proper sites along the body. By activating the harpoons in sequence the hunters will induce contractions in the leviathan's muscles which will recapitulate its swimming action. You could then swim your live leviathan back to the factory for processing.

I have one immediate idea: Have a fleet of powerful drones, controlled from a remote location. I would use some kind of weapon that, once fired from a drone, revolves in the air like a drill bit. This spear-like-weapon would be designed to penetrate the skin of the leviathan. It would have to be aimed at a weak point on the leviathan, such as at the gills/blowhole (depending on its anatomy), eyes, or any point on its head. The harpoon would be designed to detonate five seconds after impact. Have your entire fleet of drones fire at the leviathan's head, at one of these specific areas. This explosion would kill the leviathan, or at least severely cripple it, allowing for a second wave of harpoons to be fired. Then these drones can fire several rounds of spears into the leviathan, spears attached to synthetic cords. This would allow it to be towed to shore by the drones.

This ultimately depends on how many drones you have in the fleet. If you have 3-7, you'll have difficulty dragging the corpse to shore, but if you have 50-60-70...it becomes a lot easier.

This is by far the best method because it ensures that no human lives are placed on the line. 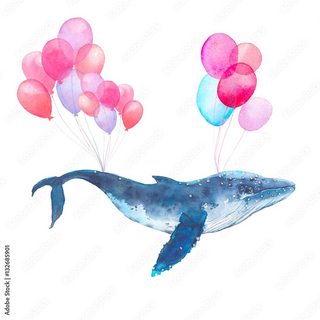 Small robots dive through the water, drill into the monster's hide, then open a tank of compressed gas to inflate a baloon. When enough baloons are inflated the monster is pulled to the surface. This takes days or weeks until the creature cannot resist anymore. The robots then inject a non clotting serum so the creature dies of bloodloss as well as exhaustion.

Like the above but more horrific. This is the nature of whaling.

Not the answer you're looking for? Browse other questions tagged technology alternate-worlds fishing .

9
Can you catch a fish with a fishing rod... from orbit?
9
How to quickly leave a planet for another planet en mass starting out from stone age tools?
10
What would humans look like if their evolution had been slower?
9
How can I explain tree-like creatures that are only active in the cold of night
8
How would underwater weaponry and technology look under high pressure?
8
Explorers living off the sea
8
How would air-nomads catch food in the sky?
18
Living on a giant banana world