A spaceship like this is traveling in the space: 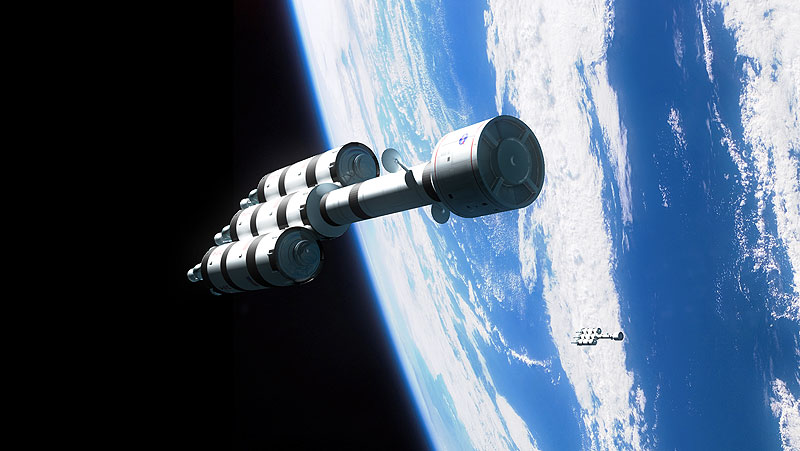 Let's say, that its 100 meters long. Its crew module have 5 cm of lead shielding, the 80 m long propellant tank is full of liquid hydrogen, and at the end there is a 500 megawatt nuclear thermal rocket running on U-235, analogous to NERVA. The reactor has a shadow shield made up from 18 cm beryllium, 5 cm tungsten and 5 cm lithium hydride, but is unshielded in other directions.

The enemy attacks this ship with an 50 kiloton neutron bomb, which puts out 75% of its energy as neutron radiation. The bomb explodes precisely behind the ship, so the reactor, the shadow shield, and the propellant tank are between the crew and the detonation.

How far should the detonation happen, if they want its neutron radiation to trigger the overrun of the engine, and thus damage it beyond repair, but NOT to cause fatal radiation sickness to the human crew?

If there is no such distance, let me know.

Probably there is no such distance. The reason: the nuclear bombs are highly unbalanced devices, their neutron-multiplication factor is around 3. It means, that as a single neutron produces around 2-3 other ones, by hitting another nucleus and let it fissile.

Any controlled nuclear fusion should be a device with a neutron multiplication factor of 1. It means, that any neutron coming out from the fission of a nucleus, should produce around 1 another neutron. It should be done so, any different value would result either a not working reactor, or an exploding one.

The control of any nuclear reactor happens on that this neutron multiplication factor is regulated between around 0.99999 and 1.00001 by some controlling system (in nuclear reactors, there are rods of some highly neutron-absorbing material, which can be put into the reactor more deeply or it can be pulled out).

This neutron multiplication factor doesn't depend on the fact, how many neutrons are in the reactor in a given moment. It only affects, how their number changes.

Thus, exploding a nuclear bomb next to a nuclear reactor, it can't make the reactor also to explode.

The alien neutron source will boost the neutrons in the reactor of the rocket, but won't change the neutron multiplication factor.

Although the reaction rate would suddenly increase. The controlling electronic would see that and it would regulate the controlling mechanism on a way to compansate. If it doesn't happen enough fast, the reactor can be damaged. But an exponential chain reaction won't happen, because any controlled reactor nuclear is incapable for that.

Furthermore, there is another effect, which plays against an induced explosion. It is because the reactors aren't purely from fissile material, they also need a moderator substance. In nuclear reactor, it is mostly water. In a nuclear rocket, it may be some different material as well (for example, the hydrogen fuel).

It is because the neutrons coming from fission reactions are coming fast from it. This fast behaves a little bit differently, as we accustomed to. For example, a a faster bullet makes a bigger hole as a slow one.

In the case of the neutrons, there is an exactly opposite process. It is because neutrons are like a small cloud (like the "electron cloud", if you like to know more, http://physics.stackexchange.com can be your friend). The nuclei are small points inside a the big atom (compared to them). If an atom would be grown to 100m big, the nucleus would be 1mm in it. If you want a neutron to "hit" a nucleus, you need it to make it to exist as long as possible nearing a nucleus. Around this is the layman level reason, why the slow neutrons are much more reactive, as the fast ones.

The neutrons hit the the atoms of the moderating substance many times, and they will be slow after a lot of hits. It is like as you bing a billiard (game) ball around a billiard desk, after many hits it will be slower. Without a moderating substance, only very big reactors can be built which are impractical on a rocket (even the energy producing reactors in nuclear power plants are always moderated).

The slow neutrons are named thermal neutrons. It means, that they have around the same energy, as the atoms of the moderator substance. From that point, they can't give it more energy, and maybe they get back into the uranium/plutonium core, to let fissile another atoms.

Now the trick is the following: in the case of thermal neutrons, their energy significantly affects their reactivity. Thus, if the moderating substance is warmer, the thermal neutrons coming from it will be far least reactive! This effect makes possible the regulated chain reactions.

The neutron bomb exploding behind the rocket will not only inject a lot of neutrons into the rocket core, but it will also heat the the moderator around it.

The process would be probably much faster as the ordinary regulation mechanism could interact. A short spike will be visible in the neutron production rate, after that the system would self-regulate.

If the neutron bomb explodes very in the near, it will damage the moderator and cooling mechanism (in most cases, they are the same). From that point, the neutron multiplication factor will sink below 1, and the reaction will stop. Thus, you will have a not-working, damaged reactor.

Not the answer you're looking for? Browse other questions tagged warfare spaceships radiation nuclear nuclear-weapons .

18
Could edible fish live in a large water tank used as a radiation shield on a spacecraft?
42
How can a space station prevent docked ships from irradiating each other or the station?
3
How much liquid hydrogen to stop neutron radiation?
6
Hypervelocity projectile damage to spaceships
8
How long does a derelict spaceship last in orbit?
2
Solar Flare disabling Nuclear Weapon defenses?
4
Nuclear Space Defence!
2
Effects of a Rapid Fire Nuclear Weapon on the Environment
1
Could a neutron-slowing field render neutron-induced nuclear fission weapons and reactors unusable?
5
Is there a metric for how far underground a nuclear bomb needs to be to safely be tested?