I am designing a world with no sun, there is something similar to asteroids in a nebula, not having a sun means no light so I decided to make that "nebula dust" glow, this dust has the following properties:

So, how will a human perceive this light?

I'm feeling that with the light source in between the observer and the target vision will be impossible or there will be some foggy annoying glow everywhere that difficult vision.

If this is it what would be a workaround for this matter?

It all depends on how much light you are talking about. If you need to have the lighting generated inside a house be sufficient to light it up, you'll quickly run into complications with fogs as you describe. Depending on whether the nebula scatters or not, you may find issues that walls are actually darker than open areas, because they block the glowing and reflect less light than they would have emitted if they were open.

That being said, look up. Look at our beautiful blue sky. It is actually the thing you describe. The blue light is caused by sunlight being scattered by molecules and dust particles in the air. Each cubic meter of air that is exposed to sunlight actually "glows" in all directions, and the cumulative effect of 100km of that glowing air is the blue light you see. And, like the issue I mentioned above, the sky is typically brighter than the ground, especially when the ground isn't being exposed to direct sunlight. This often surprises novice photographers who don't understand why they cant capture their subject and the blue sky behind them in the same picture. 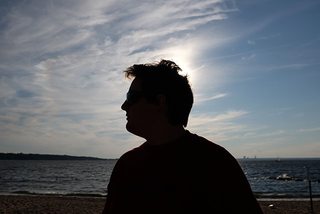 When professional photographers are shooting against the sky in this way, they often rely on a reflector to reflect enough light onto the front of the subject. Obviously this would not work in your world, but if you're wondering why professionals can shoot against the sky, that's why. 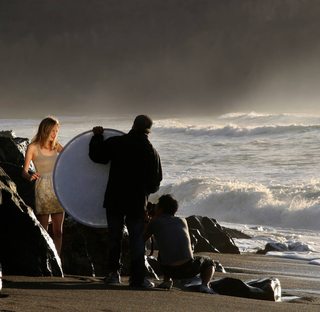 The trick to this, of course, is that the amount of scattering is quite small. It takes the cumulative effect of 100km of air glowing in this way to create the blue sky we see. If you have a large amount of brightness being generated per cubic meter, you get effects like godrays, which do obscure the background: 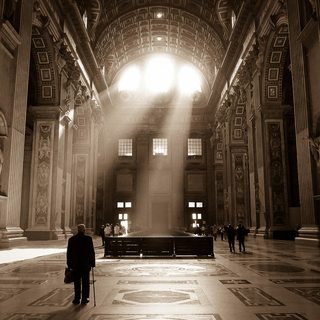 You ask only about the perception of such a light source.

Any reflected light from an object would be less intense than the light generated along the light path, therefore it would be visible only as a slightly more brilliant area, when in close proximity of the object. Over long distances the reflected light would be too dim to be visible. (like it happens with any light source).

A possible workaround would be to filter on polarized light: light reflected from a non metallic surface has a stronger polarized component. Using a polarized filter to select only that component can dim the unpolarized light while leaving the reflected light enhanced.

See my similar question. And you have the same problem of an energy source to drive the ecosystem.

My solution is to have glowing bands of light, like a nebula, threading through the atmosphere. The entire layer provides light like a neon lamp, but “The Goddess’s Skein” takes the place of the sun. Basically, the strong magnetic flux lines become visible in a certain layer of the atmosphere.

Not the answer you're looking for? Browse other questions tagged light or ask your own question.

33
What are the effects of a planet staying long-term inside of a nebula?
8
How would animals “see” in a superdense atmosphere?