After 4 years being a baron, the empire that you are sharing a border with decides to declare war to your suzerain. It will take at least a year for them to muster their whole army and knock on the doors. You, the Baron has one year to prepare for war.

The rest of the country refuses to help you due to the elitism of country's nobility. The royal family can't help you without showing favoritism and tells you that this is a trial on how well you handle the situation. Furthermore, the nobility have decided to protect the second line of defense instead of your barony. The nobility sees you as a social climber who knows nothing and they prefer to leave you to the enemy. They see this as an occasion where you can prove yourself (how useful you can be). They will barely supply you with anything but trading activities remain open.

Your task is to delay the enemy at all cost since the country has little knowledge of war logistic. but no one said you cant stop them.

The adversary, the empire, is a regional dominant power that can muster more than a million professional soldiers of its own, 4 million levies and another 2 million mixed of professional and levy soldiers from its vast vassal states. Economy wise, they can maintain a standing army indefinitely. They also deploy land battleships with no gunpowder but with numerous ballistas and formidable magicians that serves as the battleship's main weapon. The empire is not festered by corruption and uses divide and conquer tactics to subjugate adversaries.

If mana containment fails can be very disastrous or in this case very beneficial for your cause, with the power to vaporize anything within 600 meters radius. This is the medieval-magical version of nuclear bomb, one or two of these can bring serious political discussions on the table when this thing hits the capital of the enemy.

You know how to magically guide these bombs (magic remote control car) to their target. But that is too slow, you need something that will deliver this nukes to their targets in a timely fashion. Now comes these 2 solutions.

These 2 can be carried on an airship of your made, and dropping the nuke to the target is a big NO due to the fact that your airship can't go up high like Enola Gay can.

What of the two options is feasible enough to be carried on a flying ship with enough range (2-7 kilometers preferably) with the minimum size of 155mm.

The counter question: Why?
You go into big detail and preparation of flying ships and magic bombs while you still can use just regular bombs. And you try to fight the empire in an open battle.
Instead consider small, fast packs of saboteurs. They have land battleships - how to they stand against well placed gundpowder bomb while the ship is stationed in factory? How the magic nukes work when they are not nukes but cartwheel size bomb that can be used near magician barracks.
How long mana drainage works? Is it permanent and imperium would need to recruit new ones and train them?

The amounts of warriors you provide are rather large for medieval times (in amount needed to feed, train, equip and move them). One of the largest medieval battle took place in Grunwald and the largest assumptions of size are 36000 versus 27000. And in those numbers you have included also the "non fighting" serfs.

As other answers have already mentioned asymmetric warfare is the way to go. You don't meet such a large force on the open field. However if I absolutely had to pick a weapon I'd probably go with a first stage rocket, second stage glide bomb.

With medieval era tech there's no way that you can have a such a large black powder rocket that will go far enough and making a decent chemical propellant is out of your reach (if not technically quantity and quality will be a brick wall to progress) So what you do is strap a rocket onto a massive kite. The rocket propels the kite away from the airship and up giving it an initial speed boost and extra height with which to glide.

Also I would not use it in a preemptive strike. They have a nasty habit of doing the exact opposite and galvanizing opposition. Instead I would have a test close enough to the border to seem threatening but far enough away that it won't be mistaken for an attack. You keep as much of the details about how the weapon works as confidential as possible, especially the delivery mechanism. But you make the boom very, very public. Then it's essentially the Cold War.

You could also send out people to make sure that the empire's commoners know about your weapon that can vaporize armies in an instant. If the soldiers think that they're going to die instantly the risk desertion starts to look a whole lot better.

If your goal is to delay or turn back this massive army, then attacking with rockets or airships may not be your best bet. Instead you may want to consider the tactic of using your 1 year of preparation to lay some devastating traps for your opponents. I give you, the mana-mine: 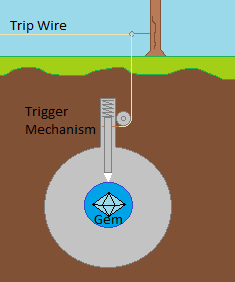 Think of the psychological effect of pushing forward in hostile territory when at any minute a mine could obliterate 1.2 kilometer diameter. And for your first strike, if you can identify a route that you are almost certain the army will march along, then a chain of these could be laid. If they were all close enough to trigger each other with their detonations, then only the last one would need a detonator. I'm sure your society could manage to work out how to trigger one from over 600 meters away, even if its just with a particularly long rope. If you pull this maneuver off, then you might be able to hit them hard enough to scare off their initial forces.

Just to put this in perspective, an army marching 4 men abreast with one row every meter would lose 22,800 men if just 10 of these bombs detonated underneath their path. I assume in this calculation that each bomb is placed 500 meters from the last, and that the army is completely on top of the range of the mines ((10 bombs * 500 meters apart + 600 meters(in front of the first one) + 100 meters(behind the last)) * 4 men per meter). The loss of 22,800 men, in a couple of seconds without even a sighting of the enemy would be quite a blow to an invading army, especially if some high ranking officers were caught in the blast.

I agree that you are asking the wrong question, but since you asked...

I do not know what you mean by gunpowder and what its statistics are, but your question implies it is some primitive variant and that you simply want to know which of the two has better range with primitive propellant, not the actual statistics of the weapon. So rocket is my answer.

Rockets are generally also more practical to carry in airships as cannon tend to be heavy. This is balanced by primitive rockets being inaccurate over any significant range. But you said the weapon would be guided...

The best methodology for you to use would be a "dirty bomb". Have some of your mages/elite troops disguised as merchants sneak into the enemy capital and deliver the bomb. Then blackmail them into peace.

If this fails though, keep in mind that medieval rockets were ABSURDLY inaccurate, though if you're firing a nuke accuracy isn't a huge issue really. Also remember that both have very short ranges. Maybe you could deliver the payload using a gigantic Railway-Cannon like device (think Big Bertha from WWI)?

7
"Peace through superior firepower" Why is it so effective and how to employ it in medieval fantasy times without the direct use of magic?
17
Which is a more effective strategic weapon/deterrent in a medieval fantasy world. A flying ship or a super gun or spellarms?
5
Supersonic Zeppelin
45
What are the safety margins for destroying a planet from space?
4
What would be the ideal way to weaponize plasma?
22
Quick destruction of a helium filled airship?
1
Age of Sail warships with magic flamethrowers