Mortars on a plane?

I am designing an airborne gunship (think something along the lines of a Lockheed AC-130). I'm considering the different kinds of weapons that could be placed on board. I have an idea that mortars would be effective fire support weapons.

Would mortars work if mounted on an airplane?

Mortars are a poor fit for airplanes. From this figure for Global Security you can see that a mortar's trajectory is designed for trench warfare. It goes up high in the air and then drops down on its target.

This is great for an infantry-carried weapon designed to hit other infantry, but not so much for an aircraft. There is very little reason to fire up from an airplane, since the whole point of an airplane gunship is to be in an elevated position.

The AC-130 you mention already mounts a superior weapon anyways, the M102 105mm howitzer. This not only has a bigger projectile than most mortars, but it is designed to fire in a straight line. Therefore, the gunship can make use of its elevation to fire down at the enemy, use the artillery's muzzle velocity to add extra kinetic energy, and rely more on aim and less on ballistics to hit its targets.

Instead of traditional mortars, think glider shells. A mortar uses a lot of power to get potential energy and speed, both of which you have in excess in your airplane. Unless you are really slow, like unpowered airship slow, you are already going fast and are really high. Now you want to target all the tanks from horizon to horizon...

If you are high enough, you could just use a JDAM, a standard bomb with a little guidance on the back to hit with pinpoint accuracy. Great for fighting the Flintstones and hitting stationary targets.

If you are smart enough, you drop your bombs with controlled parasails or other tricks to rush down the street at 130 kph trying to hit anything registering as a tank or to at least explode in a tunnel. Alternately, drop off disposable light fighter or anti-personal pods.

If you posit fighting a technological war, range and discrimination become more important. See Kaleidoscope Century for a depressing view of what a world with Brilliant Weapons (not Smart Weapons) tends to look like.

While mortars are not suited for aircraft as weapons, some engineers have looked at doing things like adapting mortar bombs as improvised aircraft bombs. This would have to involve removing the normal fuse mechanism and replacing it with a regular bomb fuse. Like most explosive ordinance used by firearms, a mortar bomb needs to be carried safely by the crew, and not detonate inside the barrel when fired. Various mechanisms are used (depending on the mortar), but generally include safety pins when carried and "setback" mechanisms which are activated by the acceleration of the round in the barrel. Aircraft bombs are generally armed and fused by different mechanisms, including barometers, radar and even "windmill" fuses which spin when the bomb is released into the airstream.

This is a lot of work for what in reality is a relatively small explosive weapon. Only forces with no real military aircraft at all, or militaries which are using very small aircraft would even consider this a feasible plan, considering there are much more effective purpose built weapons available. 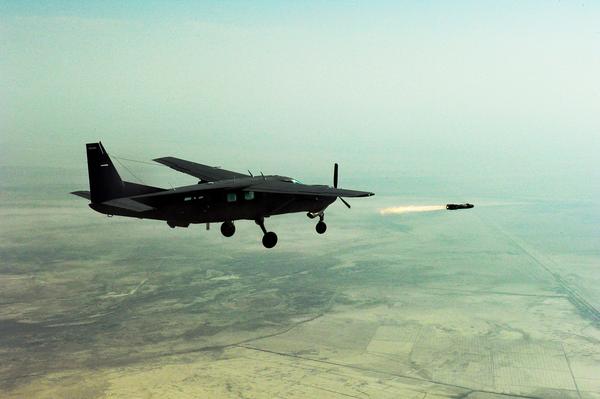 A Hellfire is a much more effective purpose built weapon

One possibility which might work in some alt history version of WWII could be a variation of the Rheinmetall SG 117. This was a recoilless multi barrel weapon mounted at more or less right angles to the axis of flight, with the idea the aircraft would fly under a bomber and a photocell triggered a salvo of rounds upwards into the enemy airplane. Similar devices were also developed with 7 or 21 barrels. 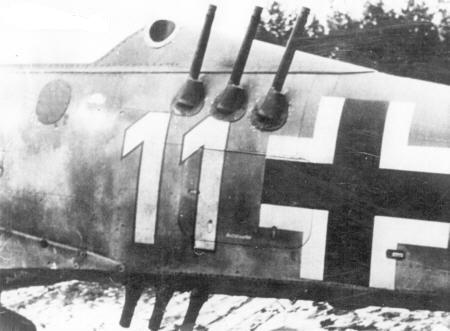 For a ground attack aircraft, turning the weapon around and triggering the cannon to fire downwards as you overfly a target at high speed would have a similar effect, but 30mm high velocity cannon shells, even with an explosive filler would have limited effect on most military hardware or troops under cover. Expanding the device to fire a salvo of 81mm mortar shells instead would have a much greater impact on the target, and with WWII era aircraft and anti aircraft defences, this might actually be worth investigating.

Of course, to carry a useful battery of 81mm recoilless tubes sized to fire 81mm mortar shells would require a much larger plane than a fighter, we would need a medium bomber at least. In the modern world, a fast overflight of an enemy target is just asking to be shot down. In Afghanistan, I never saw aircraft or even helicopters releasing ordinance, they were multiple kilometres away and using guided munitions. Large and relatively slow aircraft making ground attack runs like contact patrol fighters are a thing of the past (even A-10's use long range missiles for the most part), and AC-130's only come out at night and against enemies with limited or no air defense capabilities.

Not the answer you're looking for? Browse other questions tagged physics weapons engineering aircraft or ask your own question.

27
Projectile weaponization of water
12
Space weaponry?
2
How effective is magically inflamed food in a fight against medieval guards?
15
How do you make a gun that shoots melee weapons and/or swords?
7
Is my plasma weapon design any good?
21
What are most likely to be the first space weapons?
2
Would this giant rotating shotgun weapon be effective?