How would animals behave on a separate planet? [closed]

If animals were to evolve to a state of life that allowed them to live on different planets, such as mars, or Jupiter, how would they behave differently? (This is after humans have came to inhabit the planet, or at least are able to stay on it for prolonged periods of time)

Let's use Mars as a specific example- Temperature: -80Fah Terrain: Let's put these animals in the Valles Marineris.
Other lifeforms: Contained inside of a terraformed planet's dome, there are trees, plants, etcetera, other things that are able to survive on the frigid planet, humans are miles away, but not out of reach.

So in general, these guys have it made, but the question- What would change for these animals? Would they behave differently? Would they have it harder regardless of their evolutionary changes? What would change in their behavior as opposed to earth?
* pseudo-science based * If the animal's survival relies upon magic (ie they had no way to evolve to that point) then fiction may play a role in the answer.
I'm putting a bounty up on this question. Let me refine the question- How would life be different for the animals? Would it be more difficult, easier? What? The animals are inside of a dome covering the planet mars, but they still experience many of the hostile enviromental troubles, since the places where humans are have the things to prevent it, not the animal's habitats.
Let's use buffalo as an example. These buffalo boys have extremely thick hides through the evolution (in order to keep warm), what kind of behavior changes may they experience? Would they stay more stationary, maybe more aggressive? If people can give examples of evolutionary traits that would be required for this planet's enviroment, and then give the behavioral changes, that'd be even better.

Here's an interesting article from the Smithsonian on the matter.

Depends on a vast number of factors. If high gravity

-Strong bone structure, or perhaps life stays at a cellular level. Powerful structure stronger than bone arises to be used by the creatures. There's a book called Dragons Egg written Robert L. Forward. His book had sentient aliens the size of sesame seeds.

Suffice to say, natural selection will exist. So a light gaseous planet (Neptune) could have vast flying beasts that metabolize methane and hover in the upper atmosphere. It could drift upwards and downwards much like a jellyfish does and regulates its body temperature with the fluctuations of the planet. 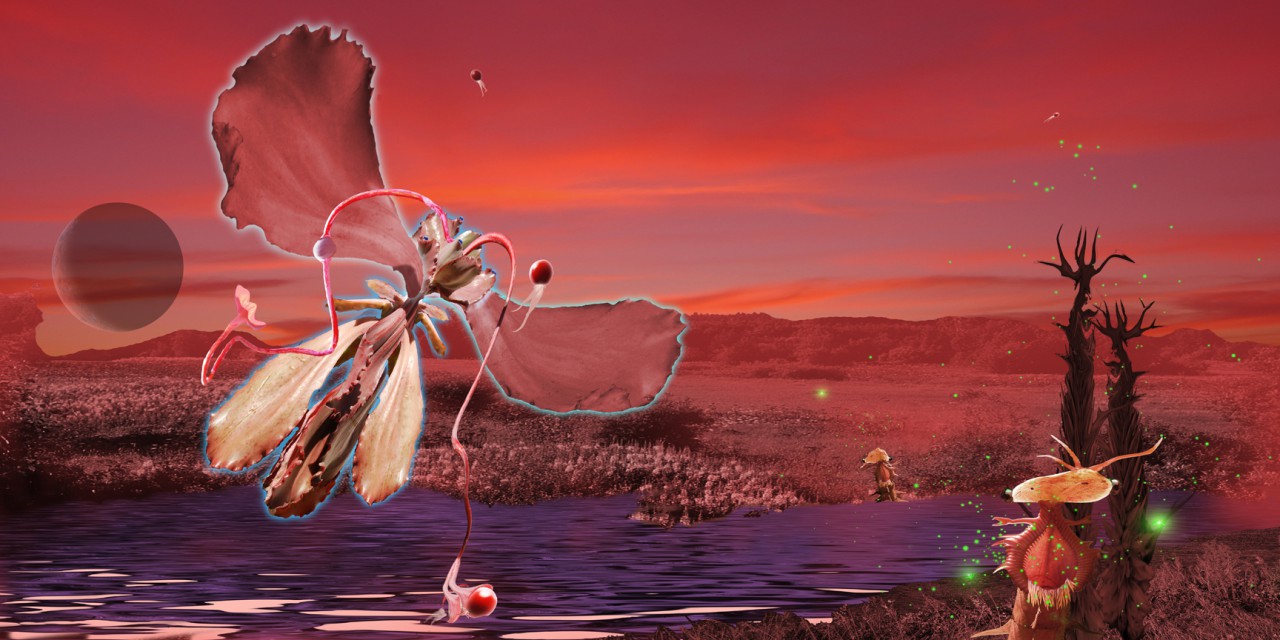 The ingredients of life (that we know off) are hydrocarbons that can form to become amino acids. Richards Dawkins in his book The Selfish Gene, talks about a vague shade of life called the Replicator. A super simple process (if you can even call it life) that repeatedly formed complex chains of amino acids. This later become the Prime mover (in a Aristotelian sense) that progressed to more complex lifeforms as competition took hold and mistakes in replication accidentally allowed DNA became more competitive to rivals and increasingly intricate in an evolutionary arms race.

We exist to further our genes. A lifeform on a different planet could use a different replication strategy. Some crazy different alternative to DNA. Or something that looks very like DNA. Its reasonably safe to assume Darwinism will hold true across the universe. If we find Earth 2.0, we could see life that are very similar depending on the epoch. (Ruled by dinosaurs, insects, bacteria).

Its very unlikely you will find bi pedal monkeys! But you may see the same natural designs manifest themselves. Eyes (something that has cropped up independently in evolutionary history), spines, a gut, hair, claws/thorns/sharp implements, feelers/fingers/claws for grasping. But in beautiful much different ways that if humans encountered it, we might not recognize it at first.

In heavy gravity planets you could have vast hiveminds, much like termites/bee's here. Heavy planets like Jupiter have hugely powerful storms. They could disperse like pollen across a vast planet in great migrations. Using minerals to form a shell as protection against the elements. Maybe crafting them in a way that allows them to be airborne for longer? Using the powerful magnetism generated by the tectonics to guide vast tribes to distant shores.

Creatures similar to insects/crustaceans are a good bet. They are fantastically profligate as species and have arisen independently a few times in nature. Trilobites are one of the most successful species ever to exist. External shells are very good against predators and external dangers.

On a hostile planet, maybe a creeping fungi uses that can draw electricity strikes to set aflame to flammable elements like potasssium/hydrogen and water to utilize the useful chemicals. And when storms abates absorbs what light it can and uses to rest to split the rest of the elements and try create some delicious proteins...

Ants communicate by smell, and dogs can communicating by licking and body language. Whales can convey meaning with a type of spray they exhibit. Maybe creatures that are totally blind (in our sense) but can change colour in a different spectrum, can convey Ulysses in smell, spray or lick. Living in vast swarms exchanging olfactory information about the great sense-scape they felt last lunar cycle...

The real answer is the possibilities are endless. Within our planet look how much complexity that we barely understand evolved. How many wonderful species are gone forever that we just don't know about!

You could put the animals through an 'adaption' phase. When you arrive at the planet, the cats just seem to eat and sleep. More than usual, but, eh, cats. Over a few months, you notice them getting stockier, and a thick layer of insulating fur, extra eye coverings, more complicated noses are definitely shows a change. Then they start scrapping at airlock to go out....

Not the answer you're looking for? Browse other questions tagged science-based fauna or ask your own question.