Fabric in a waterless world

Water does not exist. The two main liquids are lava, and some kind of "life essence" (let's call it mana).

One random day, a rock solidified with the ability to produce mana through photosynthesis, and life appeared (only mineral lifeforms, nothing organic). Every living thing pretty much looks like a rock patchwork, glued and animated by mana.

Life evolved, humanoids appear, and reach an age where they are able to produce, extract, and use mana as energy through industrialization.

However, since nothing is organic, there's no wool or anything to produce fabric.

What would be an easy, cheap way to produce a fabric-like material ?

I'm fine with magic, but it needs to be plausible.

Sure, we're familiar with asbestos for its carcinogenic tendencies, but that's only the case in organic life forms; your silicon-based ones probably wouldn't have a problem with it.

Asbestos is a set of naturally occurring minerals that produce long, flexible fibres. These fibres can be spun or woven into fabric with relative easy (easier with some forms than with others).

Much like asbestos, glass fibre consists of long, thin, flexible strands. It too can be woven into a fabric or wool - indeed, if you've ever looked at the insulation in your walls or your attic, you've probably got plenty of glass fibre right there. It's flexible and very practical, and it can either occur naturally or be manufactured.

It is a common material, found anywhere there are volcanoes on Earth. It is stronger than fiberglass, requires only melting and extruding as preparation (no chemical processes), and has a filament size 2-3 times that of asbestos so it doesn't cause cancer (may or may not be problem as Werrf said).

Plus it makes everyone on your world look like they are wire shielded against EMP. 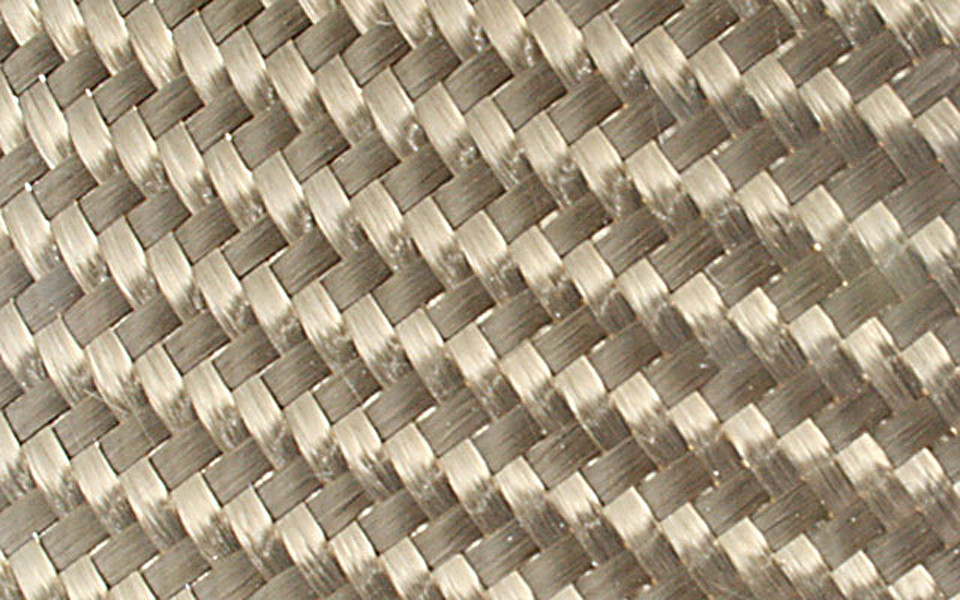 A fabric is something woven or knitted out of fibres. We as humans prefer fibres from animal or vegetal sources for various reasons, but mineral (like Werff proposed) or metal fibers can be made into a fabric just as easily.

To some degree, you could say that chainmail is already a fabric made of metal.

They are living rocks. What use would they have for a fabric?

If they they want to make themselves look pretty, maybe use paint. Heck, if they have some electrical knowledge, they could use electroplating to cover part or all of themselves with gold or some other metal.

If you absolutely need a fabric, asbestos wouldn't work well. The fibers would break pretty quickly. I would go with glass fibers (they can take a bit of bending) or, better yet, metal fibers. I'd use gold or steel since they can both take a lot of repeated bending.

The animals themselves have some kind of flexible outer skin, right? To suppliment their own skin, intelligent beings will first turn to animal skins and leather.

What kind of chemistry+magic allows this skin to exist? Living animals and plants might serve as feedstock, e.g. primitive humans learned to extract collogen and produce geleton from it. They made ropes from animal tendons, and other internal parts.

More advanced cultures will take advantage of the same stuff (whatever chemistry+magic forms permit the existence of these materials) to refine and eventually synthesize their own with desired properties.

So, the details depend on the rules of that universe. But consider an analogy of boiling bones or connective tissues between the hard plates of killed animals, to get the fiberous component out.

Maybe there could be asteroids made out of wool or cotton, and the rock people have to launch rockets to do space mining so that they can wear clothes. As an added bonus, this would enable you to add a cool subplot about space mining.

If the issue is about garments; for status, affiliations, and the like, then why not simply state so? In the pulps, Burroughs' Barsoom had people going about completely naked save for jewelry and weapons, which served as symbols of power and status; no mention of clothing to cover the body, just accessories for social purposes...

4
If natural diamond was large and abundant how would it change the world?
9
How would plants develop and grow in a world where almost the entirety of the surface is stone?
6
How to get raw materials from a water based world?
1
Hypothetical Material used to construct shell for (this) shell world
30
In a world where wood is scarce, what are the most important things you need wood for?
2
How would I classify groups of elements on the periodic table for a person building a factory on a feudal world
10
Are airships practical in a world without much metal?