Habitable moon of a gas giant: working out the sizes and distances

Within the constraints of this fictional system, I have a habitable zone spanning between 1.976 AU and 2.808 AU, and the following considerations.

Ready for the fun part?

If the terrestrial moon must be of a certain size to display tectonic activity throughout its life, as demonstrated in the difference between Earth and Venus (Venus being about 85% the size of Earth), then an Earth-sized moon (or larger) would be preferable.

To the best of my understanding this paper suggests that a world of this size, wouldn't be formed in the accretion disk of a gas giant (but I may have misunderstood), however, after the migration of a gas giant, the mixing to inner system and outer system debris has shown in simulations, to allow for the formation of water-rich terrestrial worlds. The paper does at least suggest that larger bodies may be captured, and pulled into orbit by a gas giant.

So, let's say our gas giant migrated from the frostline of the system, to somewhere near the circumstellar habitable zone, and afterword, as the orbit began to stabilize, a new terrestrial world began to take shape. Its orbit took it near enough to the gas giant to be pulled into orbit of the planet, and over time, their mutual orbits stabilized.

Here is my hypothetical.

The gas giant cradles the outer limits of the circumstellar habitable zone in such a way that the captured moon passes through the circumstellar habitable zone during each rotation. The size of the moon is large enough for tectonic activity, which may in turn, be aided by gravitational forces from its primary. The moon is also dense enough, with an iron/nickel core, to produce a strong magnetosphere, which if further aided by tectonic activity. Tidal forces are affected by the gravitational pull of the primary, throughout the moons orbit. Keeping the world warm enough to sustain liquid water, I don't think will be an issue, and would instead be a matter of striking a balance between orbital distance between the primary and the system's stars.

I feel like I am missing a few things. What are your thoughts on how I can work out a viable, habitable moon in this scenario?

Originally I asked this on Astronomy, and it was suggested that I ask here in Worldbuilding instead.

Let's work out some factors.

How can I determine how far the moon would need to orbit the gas giant, to not be tidally locked?

Tidal locking will occur at some point in time. You can't get around it.

In my original post, I naively said that there are a bunch of scenarios where capture would be possible. This, as HopDavid pointed out, is blatantly false, because the planet would be traveling in a hyperbolic orbit relative to the gas giant, and so would escape its pull rather easily.

So it has to have its orbit modified somehow.

My suggestion would be an interaction with another body, preferably another gas giant. This could change its orbit such that gravitational capture by the original gas giant is possible. Without this sort of interaction, the planet will just scoot away.

Section on the moon's properties

This may be list-like, but it's the best I can do.

You can attribute this to a few factors:

An object's speed about a star is given by the Vis Viva equation:

Presumably a earth sized body and a gas giant in their own star centered orbits would have different values for a, semi-major axis. When they cross orbits they'd both be the same distance from the star so we could use the same value of r for both moon and gas giant when they cross orbits. So they would have different speeds with regard to the central star. Their orbits would also likely intersect at an angle. Here is a pic: 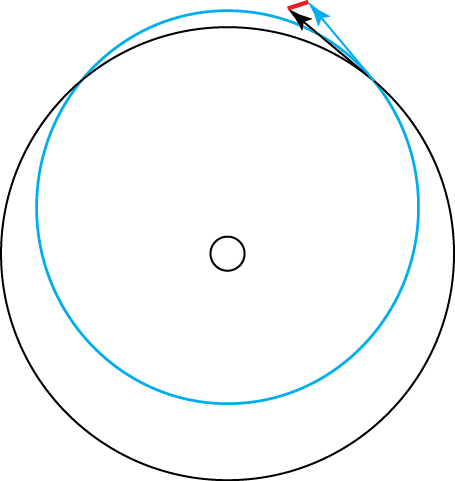 The velocity difference in their star centered orbits is shown in red. I will call the velocity indicated in red $V_{infinity}$. Here is an explanation of Vinf

When the incoming body enters the gas giant's sphere of influence, the big planet's gravity is the dominant influence so it no longer makes sense to model the path as an ellipse about the star. Now the moon's path is better modeled as a hyperbola about the gas giant.

Unless there is another influence beside the star's and gas giant's gravity, an incoming body from another orbit won't be captured by the gas giant.

Other influences are possible. If the gas giant already has moons, collisions or swing bys could shed the incoming body's speed wrt gas giant. Or if the moon passes through the gas giant's upper atmosphere and sheds velocity via aerobraking.

Large stable moons probably would have formed in the gas giant's neighorhood during accretion of the protoplanetary disk. See Wikipedia's article on the formation and origin of Jupiter's moons.

This scenario appears to cover most of the factors, though my reading of the Water Ice Lines and the Formation of Giant Moons Around Super-Jovian Planets paper you quoted seems to indicate that formation of moons such as this is not all that unlikely, just that it would be necessary for the super-jovian planet to migrate to a closer solar orbit with its moons, which would most likely be retained.

Tidal locking is a factor of distance and mass. The larger the mass and the distance, the less effect gravitic tides would have on the rotation of the moon, and hence the longer the period required for it to spin down to a synchronous rotational period. An earth-sized moon may still have a non-synchronous rotational period. You need to determine the period over which life evolved or arrived due to some sort of panspermia in order to determine the likelihood of tidal locking by the time your world becomes the focus of your story.

Certainly, you would get plate tectonics in such a system. Also, the super-jovian planet eclipsing the sun(s) would provide a major seasonal factor, probably greater than any circumstance of axial tilt or binary star position. However, since a super-jovian planet is likely to be a brown dwarf, this factor may not be as severe as the IR output of the brown dwarf may provide some minimal heating, preventing rapid or total freezing.

It is likely that such a world could be human-habitable, albeit with severe seasonal variations in climate related to the moon's position relative to the super-jovian planet and the primary stars.

Not the answer you're looking for? Browse other questions tagged planets astronomy moons orbital-mechanics habitability .

2
How would life be on a planet that's actually a satellite of a gas giant?
0
Is my habitable system possible?
21
Is a Jupiter-sized planet plausible in a habitable zone?
25
Can a gas giant have its own habitable zone?
22
Reality Check: Habitable moon around earth-like planet
20
Can a habitable moon rely on the magnetosphere of its parent planet for radiation protection?
6
Making a slow orbit around a large gas giant
7
Will moons orbiting gas giants always be tidally locked?
5
Naturally making a gas giant moon habitable
8
Captured Earth-Like Moons around Gas Giants
See more linked questions