What would the most effective means of space combat be in the near future? [closed]

I'm writing a book, and in the book, there are troops that are released from a ship to combat. They have access to whatever weaponry you can think of, they have things like the BFG 9000 from DOOM, that kind of stuff. In my book, they are heavily armoured space marines with high tech suits protecting them from plasma, electricity, etcetera, inspired by the HEV suit from the half life series. My question- How do you most effectively defeat a team of seven to twenty men while you're in space? What weapons are most effective?

Their means of mobility is jet propulsion, and it is extremely unlikely that it will be damaged or run out of juice before being disabled. The suits they use would cut EMP, electricity, plasma, that category of damage into thirds.
"Premise" Space, sci-fi technology has existed for years. They are very advanced, but they need an effective way to fight in space. The large ships they use are slow, and they take to the vaccum of space in order to fight for control over the ships instead of slow paced battles. My "problem" is that I don't know what the most effective way to fight is; Do you use railguns, EMPs, radiation, or what? I think the question was acceptable since it was properly answered and acceptable, enabling me to continue writing my book.

Seven-to-twenty men jump out of their heavily-armored and armed-to-the-teeth spacefaring tank/battleship and hail "Come at me bro!" over the comms, what do you do?

Mow them down with superior firepower; you're in a gorram battleship after all.

Jumping out for a fistfight was their frelling dumb idea, and isn't a mistake you have to imitate. Engage the thrusters just enough to keep the sitting ducks from becoming a boarding party, and then simply fire at your leisure (using guns big enough to put holes in other battleships with real armor) at anything getting too close.

The only trouble you'll have is if they've legitimately made it onto the hull, in which case you'll have to send your own space marines (or drones, it doesn't really matter) out to scrape them off. If they're impervious to EMP, just shoot them with projectile weapons. Holes in spacesuits make it very difficult to breathe, and the side left breathing after a battle is typically the side that wins. If the suits can somehow seal off airflow to disabled appendages, you're still slowing them down considerably and making it harder for them to set up the demolitions they were sent to install.

The suits they use would cut EMP, electricity, plasma, that category of damage into thirds.

Just shoot them from EMP/electric/plasma weapons, then. 1/3 of a lighting strike or 1/3 of a plasma fireball still seem enough to fry a human.

"They have access to whatever weaponry you can think of"

Ok, I am going to create a target and forget canister of nanobots. The nanobots can be different types.

Vs the Marines, they simply cover the suit and go rigid. I could also add corrosive, penetrating etc.

Smash them with a slug.

Hit them by some large mass at high velocity. You don't have to penetrate or damage their armor, if the mechanical shock is high enough, their organs will be move in an unpleasant way.

The exact way of creating the shock depends on the situation: run over them with a spaceship, fire a mass driver on them... But you have to ensure, that they can not dodge it.

Answers so far consider conflict a problem to be solved as efficiently as possible with whatever means are available. To make your scenario work you need to build in a boatload of culture, such than only man to man matches count as combat and everything else is seen as so dishonorable no space warrior would ever consider it. It was not that long ago that Western civilization considered combat in this way - one example being the prohibition on crossbows (enabling peasant to kill noble night) etc. Older civilizations had "champions" who did battle with each other, each representing his people. Here is Jim Fitzpatrick's depiction of Streng, champion of the Fir Bolg. You should definitely have your space warrior done up similarly. 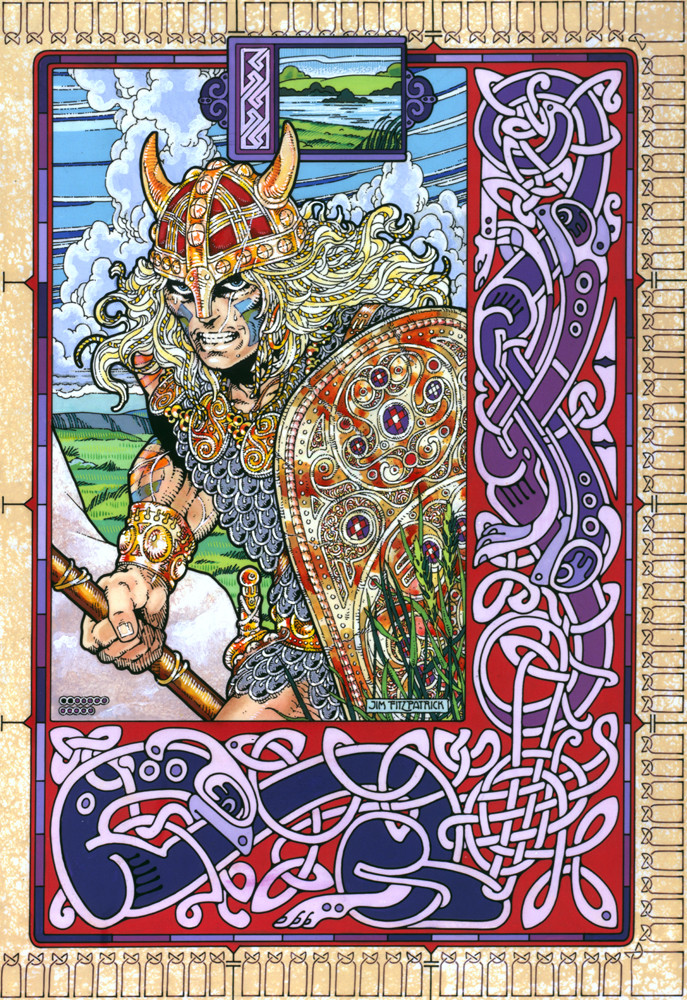 I could imagine such a scenario evolving in a technologically advanced society because no-holds barred conflicts were just too destructive - akin to the Taste of Armageddon Star Trek where war was simulated, to avoid wrecking too much stuff. https://en.wikipedia.org/wiki/A_Taste_of_Armageddon
So instead ships are unarmed and combat takes place mano a mano with a circumscribed set of weapons. Your weapons can be whatever you think is appropriate for that culture.

The logical extreme of this scenario is space wrestling between nearly nude, cybernetically augmented champions - veins bulging, implants gleaming redly, sweat boiling off into space. I think there are a lot of people out there would would really get into that.

All those EMP-prevention and laser-proof mirror coatings won't do you much good against a high-velocity projectile that punches a hole all the way through that suit will cause some highly uncomfortable medical issues (Explosive decompression is a myth, but it still would be no fun.)

The second link (video) shows that a metal round punching through metal armor gets REALLY HOT. So while explosive decompression won't kill your marines, the heat may. Current railgun technology goes at about Mach 7. That imparts a great deal of energy to your target in the form of force and energy. Heat expansion may cause a catastrophic rupture of the suit.

If the suit is armored sufficiently to resit catastrophic rupture and includes some kind of inner "self-sealing goo" to reseal the holes, you still have a great deal of force to dissipate. A Mach 7 projectile slamming into something with the mass of a human plus the armor will mean your marine is now probably wounded from the impact, flying way off course away from the rail gun, and may have whiplash, broken bones, and/or a fractured spine due to the sudden change in velocity.

Yeah, you can (maybe) build armor that could take the hit, but the sudden velocity change would still be overwhelming to your target. And to any space marines behind that target in a direct-line path from gun to marine.

Maneuvering to avoid a projectile travelling at those speeds would be... really difficult as well. The projectile could be small enough to be hard for radar to pick up accurately. And it is moving fast enough that even if your marine's suit begins some sort of automatic course correction to dodge, it simply may not be able to move out of the way in time. Or doing so may cause similar whiplash/neck injury problems if it CAN move that fast.

And a railgun system in the future might be able to fire fast enough to create a grid-like pattern of incoming projectiles. That's, for all intents and purposes, a wall of Mach 7 projectiles slamming into your marines. Think of something like the US Naval Phalanx CIWS "Sea Wiz" system.

50
How to add tactics and maneuvering into space warfare
40
What kind of realistic ranged weapons would be effective in spaceship combat?
52
What shape of a ship would be most effective in real life space combat?
5
What sort of claws would be best utilized for melee combat and quickly scaling the walls of a modern day building?
2
How Effective Would War Mammoths be in Combat in a Medieval Civilization?
6
Making a Plasma Gun that works
30
Believable way to make missiles and drones inferior to analog starfighters?
4
Methods of Conducting Electricity through a Vacuum?