What would be the ecosystem on a earth-like planet with substantially less oceanic water than Earth?

In Habitable Planets for Man, Stephen H. Dole proposes that a planet with substantially less oceanic water than Earth could have habitable zones, anyway, even if a high fraction of the surface would be desertic. It "might well have noninterconnecting oceans" and "in the absence of worldwide oceanic circulation, there would be less moderation of temperature cycles (that is, more continental, as opposed to oceanic, climates)" (p. 126).

What would be the perceptible effects of this kind of habitable planet on climate, flora, fauna and human life in general? Thank you in advance, for your time and for answering.

Topography matters as well as total quantity of water. Earth's oceans are deep, over 12,000 ft. / 3.5 km on average. A planet with significantly flatter topography (less elevation range) might have as much or more surface water coverage with significantly less volume/mass of water - mostly shallow seas instead of deep abyssal oceans.

However, if we're assuming a planet similar to Earth except for less water:

Generally harsher climate. This is the 'continental' climate referred to in the quote in the question -- colder winters, hotter summers. That's why sea-moderated Scotland is relatively mild while inland Moscow, at almost exactly the same latitude, has much more extreme temperature variations, and farther east parts of Russia even more so. Similarly, the Aleutian Islands of Alaska are cold and wet, but don't reach anything like the extreme winter cold of inland Fairbanks, Alaska (though they are cooler in summer).

This sort of climate would dominate over most of the planet. Subtropical areas might be outright unlivable in summer; subarctic areas would tend to be like our Siberia or worse.

How exactly it turned out would depend on the planet's average temperature, which has varied significantly over Earth's history of complex life on land (the last 400 million years or so). A drier world would also affect the average temperature - ocean and forest are dark and absorb sunlight well, while deserts tend to be pale (reflective), so this would mean more sunlight reflected away and a cooler world overall.

On the other hand, a mostly-desert planet would probably remove volcanic CO2 from the atmosphere less effectively, warming it overall.

This world would also probably have less clouds (less water surface to evaporate water from), but clouds are complicated, with both cooling and warming effects on the overall climate. https://isccp.giss.nasa.gov/role.html

So it's not intuitively clear whether this world would be cooler or warmer than current-day Earth on average, but it would certainly have more severe extremes (assuming all else is equal, again - for example less axial tilt would decrease seasonality).

Flora and fauna: Well, given the climate, there would probably be less overall diversity than Earth has - rich, moist environments like rainforests and tallgrass prairie are going to be rare & limited (though they might well exist - coastal areas and islands could still be locally moist and moderated). It's very unlikely you'd get anything like our Amazon Basin or the eastern Great Plains, though. There's probably going to be a lot of hot desert, semi-desert, and steppe / dry grassland in the low-and mid-latitudes, and Siberia-type taiga and cold desert in the higher latitudes.

Given less water availability, there would be less biological productivity too, assuming the plants here are about as efficient at using water as Earth's.

Human life would probably be concentrated in the relatively small moderated coastal/island areas, where agriculture would be workable. Outside that, people would probably be limited to hunting-gathering or at best low-population-density nomadic herding of hardy livestock, and the harsher desert areas might not be survivable at all.

The simple answer is hotter and dryer. Something like the Triassic period of planet Earth, only more extremely so.

The Triassic continental interior climate was generally hot and dry, so that typical deposits are red bed sandstones and evaporites. There is no evidence of glaciation at or near either pole; in fact, the polar regions were apparently moist and temperate, providing a climate suitable for forests and vertebrates, including reptiles. Pangaea's large size limited the moderating effect of the global ocean; its continental climate was highly seasonal, with very hot summers and cold winters.[16] The strong contrast between the Pangea supercontinent and the global ocean triggered intense cross-equatorial monsoons.

This condition was due a single supercontinent dominating Earth's environment. Therefore, a planet with reduced oceans would be definitely hotter and dryer. The best starting point for considering its lifeforms would be desert ecology.

In ecology, desert ecology is the sum of the interactions between both biotic and abiotic processes in arid regions, and it includes the interactions of plant, animal, and bacterial populations in a desert habitat, ecosystem, and community. Some of the abiotic factors also include latitude and longitude, soil, and climate. Each of these factors have caused adaptations to the particular environment of the region. The biotic processes include animals and plants and the way they interact. Although deserts have severe climates, some plants still manage to grow. In hot deserts plants are called xerophytic meaning they are able to survive long dry periods. They may close their pores in daytime; they store water in their stems and leaves. Some of these plants include popcorn flower, barrel cactus and Saguaro cactus.

Again environmental conditions will be more extreme than on Earth. But by comparison with our deserts.

Deserts support diverse communities of plant and animals that have evolved resistance to and methods of circumventing the extreme temperatures and arid conditions. Desert ecology is characterized by dry, alkaline soils, low net production and opportunistic feeding patterns by herbivores and carnivores.

Generally temperature cycles, between day and night, and between seasons, are likely to extreme. You will need to take into account the duration of the planet's rotation. For example, if takes sixty hours to rotate, then its surface might not have the time to cool down sufficiently to be a cold desert night. Also, the shape of its orbit will affect the amount of insolation. So if the orbit is highly elliptical, then its equivalent of winter could be very cold. While its summers could be infernos. While its orbit around its primary star was circular, there might be very little variation between or even effectively none. 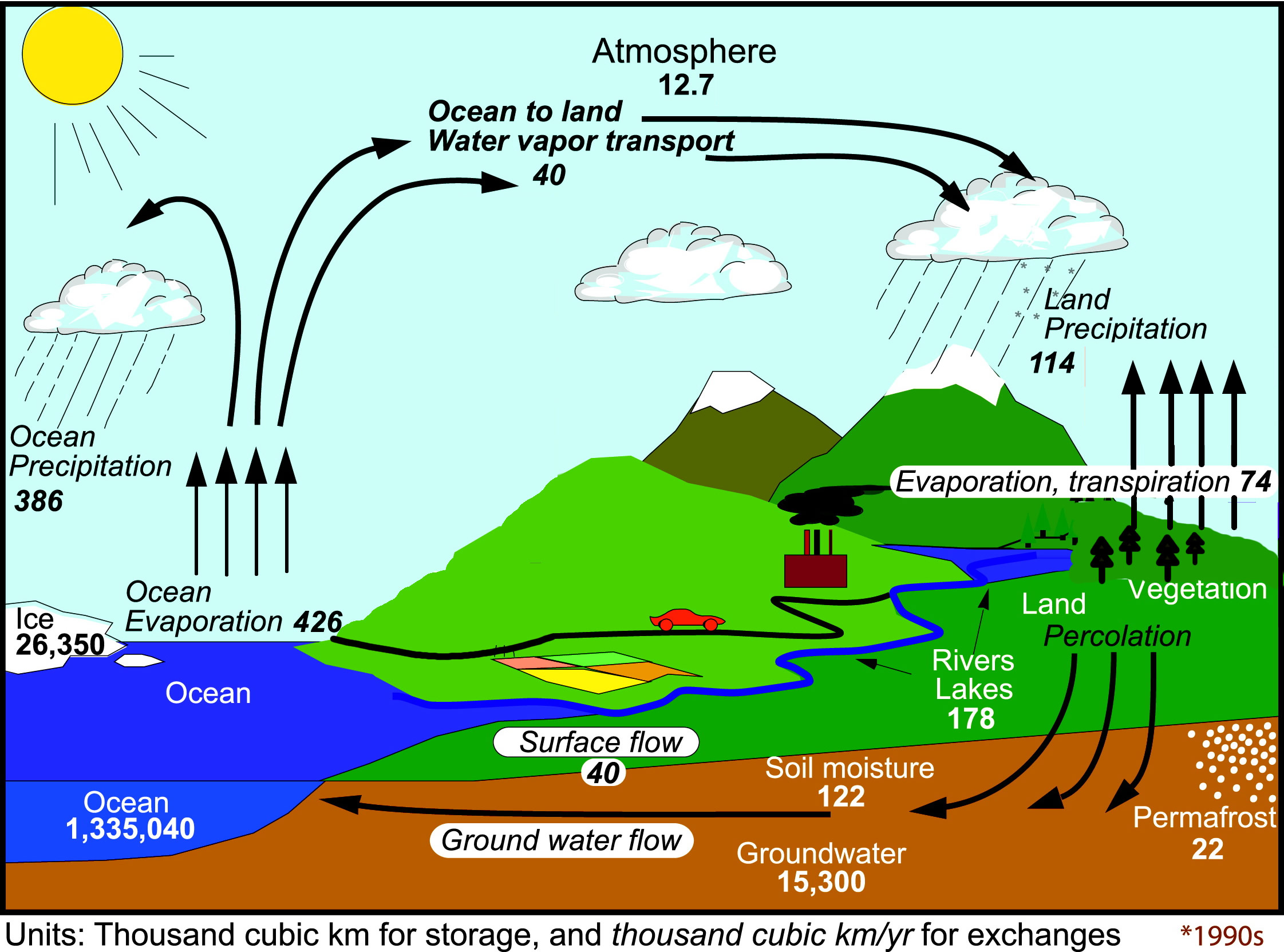 A graphic from KE Tremberth showing water flows on Earth.

The key is that the ocean evaporation and precipitation is significantly larger than the land, and that the land has significant net losses of water to the ocean. Let us say we reduce the amount of ocean surface available for evaporation by half. This will lower the magnitude of evaporation by roughly half to 213, on the chart. At the same ratio of evaporation/precipitation over the ocean, there would only be about 20 units transported from ocean to land. As land rain levels fell, vegetation would die off, reducing transpiration and increasing runoff into surface flow to the ocean.

The chain of effects is complex, but in the end, you would have less rain over a much larger surface area of land. The world would be dry. 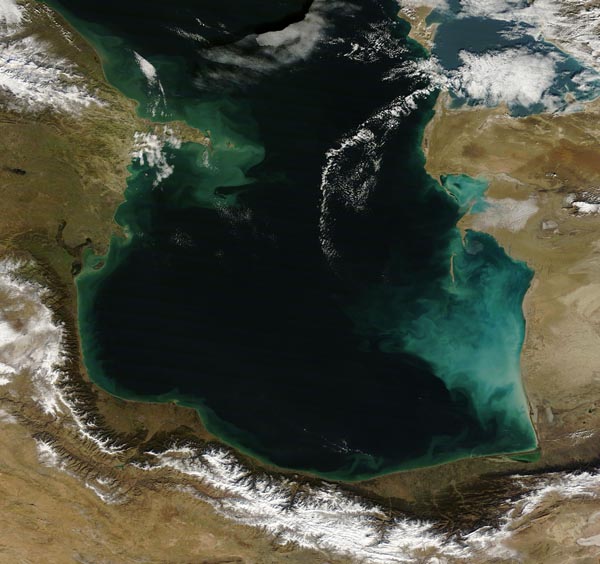 This is the southern Caspian Sea. The region around here is mostly desert; Azerbaijan to the west is a desert, the Iranian Plateau to the south is a desert, Turkmenistan and the Kyzyl Kum desert to the east is...well...a desert. But look at dark blotches edging the snowy mountains to the south. As moist air comes off the Caspian Sea, it rises over the Alborz mountains (taller than the Rockies) and drops moisture as rain and snow. The result is, in the middle of a barren desert, a rainforest. 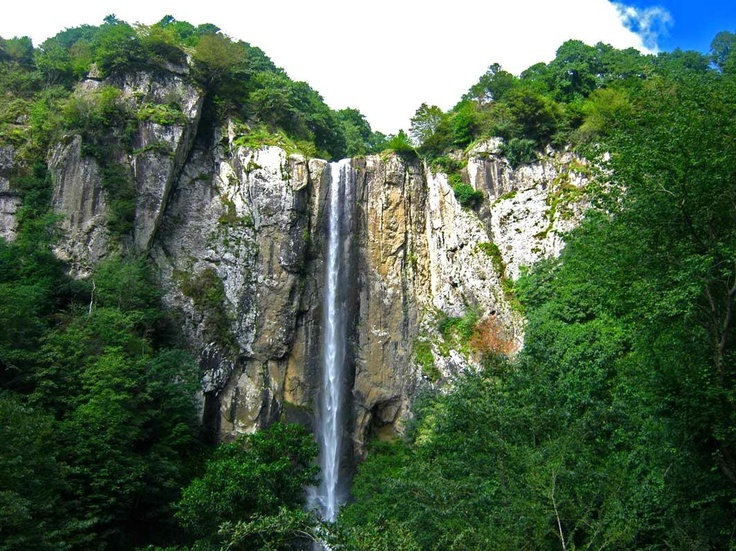 If ocean levels were lower, but temperatures were otherwise kept the same, there would be significant differences on Earth. But while desert would be the dominant biome, it would not be the only one. The circulation patterns and locations of oceans will generate wetter and dryer areas, and local topography could produce even rainforests.

The range of climates we see on Earth would still be present, just in different proportions.

The habitability is very robust against variation in the amount of water. For the climate, mostly the surface area of the oceans is relevant. The oceans have a remarkable depth profile: The are some shallow parts (depths at about 200 m or less) covering the fringes of the continental plates and there are very deep parts (approx 4000 m and deeper). The oceans can loose a lot of water volume without loosing too much of surface, and the general climate will still be approximately the same as it is just now (of course the continents are somewhat bigger, and deserts in their middle will make up for most of the gain in continental surface). So with only one half of the volume of water, I won't expect a big effect on habitability of the earth.

A major issue is whether there would be Wilson cycles of ocean basin formation and plate tectonics. Although these processes happen over 100MY timescales, ultimately the recycling of elements known as the silica cycle has a major influence on climate and maintenance of stability. It is probable that continental rifting would occur as a result of convective circulation in the mantle--I'm assuming that the planet has a molten interior unlike the Moon. But without the weathering of continents, whereby materials erode into the deepsea and ultimately are recycled back into the mantel at subduction zones, the biosphere would eventually accumulate certain elements and run short on others.

Plate tectonics results from the convective movement of magma in the asthenosphere, which is the process by which the internal heat of the planet is released. The danger to life on a planet without plate tectonics would be that instead of heat being released by seafloor spreading and subduction of ocean plates over 100MY cycles, there would be episodic mass eruptions that would largely or completely resurface the planet. Events like this are posited for Venus and would pose a major challenge for evolution such as Earth has seen over the last 540MY (Phanerozoic). So perhaps life would have to reboot each time from whatever survived the catastrophic resurfacing.

Not the answer you're looking for? Browse other questions tagged reality-check earth-like habitability or ask your own question.

12
Could there be a planet bigger than Earth, but with less gravity?
4
Is complex life on a season-less, moonless planet, with two separate and distinct ecosystems possible?
14
Earth-like planet with a very hot ocean?
5
Earth analog planet with more than 3 convection cells per hemisphere
4
What would plant life be like on an earth-like planet with extremely low gravity
10
Earth-like planet with tundra or taiga as dominant biomes?
8
What are the conditions of an Earth-like, water-ball planet?
1
What is the largest I can make my water planet, while remaining within Earth-like parameters?
1
Is My Oceanic Super-Earth with steam/water vapor atmosphere plausible?(Closed)