So basically there is this ionocraft thingy and it would be used frequently by one of my stories, mainly by a lightweight character (6.3 kg). Now the question:

If I were to use nanotechnology to create an ionocraft, that has a ridiculously big surface area packed into a ridiculously tiny device (human lungs already did it).

Ionocraft triangle arrangement (top view, where every line represents the outer edges of the plates) 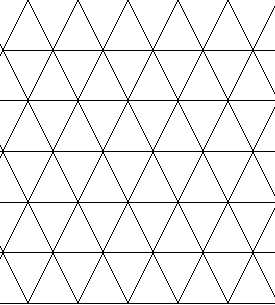 How much energy or surface area would I need to lift x kg's of something?

How small can an individual triangle of the ionocraft get, without negatively affecting its efficiency?

How dangerous would this device be?

To lift a weight requires force, and not energy. To lift 1kg weight on the Earth requires around 9.81N force (I think we can round it to 10N).

Most human-carrying rockets start with around 2-5g. To start as they do, you have to give 30-60N after every kg of mass your rocket has. The mass of the ion engine is of course in it.

Now to produce a force continuously, what you require is still not energy. To do that, you require power. Power means, how many energy do you produce in a second.

From that point is the situation a little bit more complex.

To produce 1N force (upwardly) for a second, you have to shot out (downwardly) 1 kg mass (typically, some gaseous material) with 1m/s^2 speed during this second.

Note, the maximal outgoing speed with chemical engines is around 4-5km/s. The best actually used fuel (LOX, fluid oxygen and hydrogen) has 3.6km/s. Current ion engines can go until some tens of km/s, experimental ones can go until even 50. But it is a nanotechnologic thing, so we can calculate with 100km/s.

Now the problem is the following: energy increases quadratically with the speed, so to accelerate 1kg fuel to 100km/s requires 100 times more energy as to accelerate it to 10km/s. But it gives only 10 times more force, because it depends only linearly.

To levitate an 1kg thing 1s long with a drive producing 100km/s outgoing speed, you need to:

Now the problem is that this 500kJ energy will actually mean a gas hitting the ground and the air with cosmical speed. Yes you lose this energy to drive the engine, but you get it back on the spot. The drive will be in a plasma cloud and everything will evaporate around it. I wouldn't be in the near, it will be like an explosion.

It the space it could work.

Not the answer you're looking for? Browse other questions tagged science-based science-fiction nanotechnology or ask your own question.

13
Ways to make contact with aliens on a much larger size scale?
6
Quick question: The feasability of this plasma cannon
3
What's strongest non-nuclear explosive I can make with nanotechnology?
0
Scaling down an electrolaser with the help of nanotechnology
9
A quick poison with obvious effects
11
Would nanotechnology-scale devices be vulnerable to EMP?
6
So, magic is based on swarm robotics and nanotechnology. How can I have Anti-magic fields?