In its wandering through the Milky Way, the solar system is getting close to a solitary neutron star. The neutron star will "fly by" above the plane of the ecliptic and its closest distance from the Sun will be 10 AU. The neutron star belongs to the Milky Way too, therefore its orbital velocity is comparable to that of the Sun: they cross each other path.

How and when could we possibly detect the neutron star during its approach? We have our present technology.

Depends on the type of the neutron star

Neutron stars that can be observed tend to put out lots of energy. Pulsars in particular would be pretty easy to spot from literally a galaxy away. Young neutron stars may not yet have developed into pulsars, but would still be powerful x-ray sources. However, if a neutron star is young, then it is likely embedded in the cloud of its supernova, which would be another pretty big giveaway that there is a neutron star around (other than the massive x-ray source). In any case, a neutron star shouldn't be able to hide for long.

If a neutron star couldn't be detected (for some reason)...

The solar system would be thrown into chaos.

The semi-major axis of Saturn is 9.5 AU, Uranus is 19.2 AU, Neptune is 30.1 AU. Thus, if a neutron star passed 10 AU above the plane of the ecliptic, it would be exerting more gravitational pull on those planets than the sun. I don't know exactly what would happen, but its a safe bet by the time the neutron star passed, there would be no more planets in the solar system.

Given this, the advance warning of an un-detecatable neutron star (which is basically a black hole) would be the objects of the Oort cloud and then Kuiper belt being flung willy-nilly throughout the solar system and out into the galaxy. A massive increase in comets would certainly be detectable to even amateur astronomers. Who says comets aren't harbingers of doom!

A dead neutron star could probably be detected long before it entered the solar system. Before the general consensus was reached by cosmologists on modern cold dark matter and dark energy cosmology, a viable candidate for dark matter making up galactic halos were known as MACHOs: Massive Astrophysical Compact Halo Objects. Neutron stars are one of the prototypical examples of a macho.

MACHOs in general don't emit enough light, radio, or x-ray to be detected directly, but because they are so compact, they can be detected by gravitational microlensing of background stars as they transit in front. The Wikipedia article on MACHOs has a decent summary.

EDIT: I don't have enough rep to comment yet, but to address the question of transit time:

The sun's peculiar motion (i.e., it's motion relative to the average rotational velocity of the local segment of the milky way) is about 13 km/s reference . The neutron star could easily have a similar order of magnitude, so let's call the relative crossing velocity 20 km/s. From wikipedia, the solar system is about 50 AU in radius, so about 15 billion km in diameter. This gives a transit time of about 20 years.

It will be terribly easily detected IMMEDIATELY.

There could be 3 or four possible types/stages of a neutron star. A pulsar or magnetar would be immediately detected far, far before it reaches 10 AU to the sun in any direction. The magnetic field would be so powerful, it will probably affect all the magnetically sensitive devices on Earth, considering their magnetic fields are hundreds of billions of times stronger than the magnetic field of any planet in our entire solar system.

If it is an active neutron star, with powerful gamma bursts, we might never detect it at all: we would all be dead already. This would happen if Earth is unlucky enough to be in line with the poles of the neutron star.

Even if it is a dead neutron star, no longer having the unimaginably powerful magnetic field or surface temperature of billions of degrees, it would still be immediately detected due to its extremely strong and devastating effect on the planets in our solar system. Considering that the mass of a neutron is 1.4 to 4 times the mass of our sun, it will absolutely wreak havoc at 10 AU from the sun. The orbits of the planets will initially be elongated irreparably, and then some of them might go swirling into the neutron star, or get slingshot out of the entire solar system.

At the very least, the orbits of the middle planets (Jupiter, Saturn) would be irreparably elongated. Before getting to 10 AU, the neutron star will wreak disaster on the objects in the Kuiper Belt and far, far before that, it would pick up a whole gang of Oort Cloud comets and planetesimals, bringing them inwards with it. Long before the neutron star reached 10 AU, the comets and planetesimals of Oort Cloud and Kuiper Belt will be raining down on the planets (including Earth).

We would probably all be extinct several years before the neutron star reached 10 AU from the sun. So in a sense it would be impossible to detect the neutron star entering our solar system.

In response to Morning Star's comments

I am not sure that the magnetic field would be so strong. Yes, it is extremely strong on the surface. But it decreases cubically with the distance. I think it may be a similar misunderstanding as it goes with the black holes: yes they have a very strong gravitational field, but an 1 Solar mass black hole from 1 AU would have the same gravity as the Sun.

You might not be sure that the magnetic field would be so strong, but a quick internet search tells me otherwise. Try this:

These magnetic fields are hundreds of millions of times stronger than any man-made magnet, and quadrillions of times more powerful than the field surrounding Earth. - Reference

In order to stay on the safe side, I refrained from quadrillions of times and stayed with hundreds of billions of times. About the gravity of black holes, where did I claim that a black hole of mass $x$ will ever have a gravitational field more massive than that?

The change on the orbits of the outer planets would be easily visible and permanent, but it wouldn't have a major effect to us.

In fact the inner planets would be affected more severely by the gravity of the neutron star. It is simple pythagorean theorem scenario calculating the distance of the intruder to the planets. Here, let me help you: 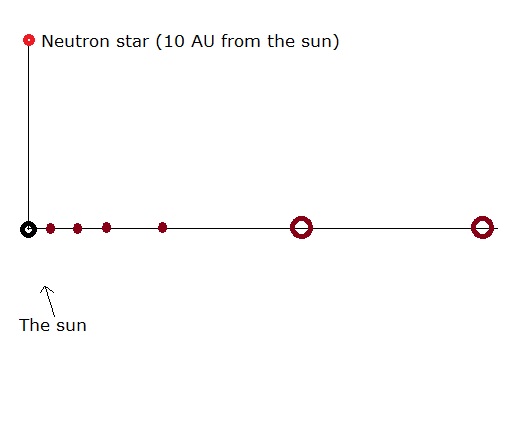 Try and work out the relative distance of the planets from the neutron star and figure out which ones would be affected more.

Furthermore, the neutron star's gravity and the sun's gravity will partially assist each other, not only pulling the planets out of the solar system's plane, but also bringing them closer toward the sun. It is a matter of trignometric ratios and angles. Work it out.

About the gamma bursts: Not all neutron star produces gamma bursts and even they don't do it always.

The meaning of my statement(s) becomes clear now. Yes?

The surface temperature of the neutron stars is some hundreds of thousands, at most some million K, and not billions. Which is still high, but their whole radiation is not catastrophic. It wouldn't be surely visible with free eye.

OP never mentioned that the neutron star entering the solar system is an old, cold one. Once again I refrained from stating trillions of degrees and stayed on the safe billions figure. Furthermore, notice that even after losing most of their heat, neutron stars still get to a temperature of about a million, an order of magnitude greater than "hundreds of thousands".

A 4 solar mass neutron star from 10 AU has the gravitational force of 1/25 of the Sun. Of course it perturbs the orbits, but not significantly, in the case of the Earth it may be even survivable. Considering that the OP says the NS will go above the elliptic, the majority of the orbit perturbation will change the plane in which the Earth orbits. This part won't affect the weather on the Earth. The remainder, yes.

As I mentioned earlier, considering that the intruder star and sun are not perpendicular from the reference point of Earth, they will have a combined gravitational effect on all the planets, pulling them up (as in, away from the solar system's plane) AND toward the sun.

Debunk: Our Sun or Earth could be hit by a rogue planet, neutron star, black hole, brown dwarf or star

So, this is rather theoretical. But if this is for some science fiction story, a young neutron star or one in a binary system would be easy to spot from its X-ray emissions and likely to be a pulsar too. But unlike white dwarfs, neutron stars can cool down and become dead remnants.

Still we'd detect it via gravitational lensing of distant stars especially if it moves in front of the denser parts of the Milky Way in the sky.

You are also talking about something heavier than our sun, so it would have a significant effect on other objects in the solar system and we have many of those now that we are monitoring, transneptunian objects as well as several distant spacecraft that we are still in contact with (Voyager I and II, Pioneer I and II, New Horizons). After all, the gravitational attraction would be more than that of our sun for an object equidistant from both.

Also, objects from the Oort cloud would likely hit it from time to time, and cause flashes of light as they hit its solid surface, and most likely leave an accretion disk. I'm not sure how often that would happen or how easy it would be to detect, if anyone knows how to work it out do comment!

11
A supermassive black hole is coming our way. When's the latest that we would notice?
6
How could Earth quickly deorbit the Sun without being destroyed?
9
Incoming Rogue Planet! When do we see it?
7
Possibility of a large as of yet undetected object headed to intercept our solar system
4
What would happen if a neutron star approached the solar system?
6
Effects of a close approach with a non-pulsar neutron star?

13
How could a dust cloud form around a middle-aged star?
9
How do I design the solar transit of a hot Jupiter?
6
I've determined how many planets my solar system could plausibly have. How do I figure out what kind of planets they are?
11
How long would this eclipse last?
13
Rogue Planet Illuminated by Galactic Centre
5
Feasibility of multiple satellites around a planet inspired by Luyten B/Gliese 273b
4
What would happen if a neutron star approached the solar system?