How to trap a energy being?

I have a creature that can transform itself from matter into energy. Some scientist try to trap it by tricking it into a cage. But what kind of cage will hold an energy being?

This take place in the future, so you can use future tech, but it must be based on scientific principles and at least be theoretically possible for humans to create -- no making up a fancy name like "warp drive" and have it just work.

Since there are all forms energy that your creature can take, it will have to be some kind of proton or charged particle. If your creature is pure light, then it does not have mass, and cannot be captured, so I will try to be as thorough as I can.

A Magnetic Trap is used to trap neutral particles with magnetic moments on the atomic level. Here is a research paper (PDF) that goes into all kinds of details and formulas.

A similar way is used to trap anti-matter, where the magnetic box suspends them. At CERN they use such a device but can only store very small quantities. Documentaries about using this as a form of propulsion show building a large one in space to capture any or store what they manufacture in space.

Here is a peer-reviewed paper (PDF) authored by CERN from the Proceedings of EPAC 2002, Paris, France titled "Photoelectron Trapping In Electric and Magnetic Field"

If you are looking at capturing charged particles, a Penning Trap would be the best option. Also, here is a webpage on the Penning Trap from the Max Planck Institute. Photo of the device is in this page.

For Ions, there is a Ion Trap that uses a combination of electric or magnetic fields.

I did give some thought as to what if your creature takes the form of pure light. There may be two ways that I know of that you can capture such a creature, but you would need to do this in two steps.

The first step is that you need to slow it down to a stop or slow enough to attempt a capture. If the creature is in the form of pure light, then it can move at that speed.

A while back some scientists were able to use a crystal to slow down light. I found the article, it was in the Daily Mail titled: "Scientists stop light completely for a record-breaking MINUTE by trapping it inside a crystal"

The other was more recent and I saw it in a TV documentary where a scientist slowed the speed of light using gases. All I was able to find were articles written in 1999 and 2003.

However, I came across this peer-review paper on arXiv published Feb 2017 entitled "Optical cooling and trapping of highly magnetic atoms: The benefits of a spontaneous spin polarization" which may give you some other idea.

The field of capturing energy, whether real science or SyFi is a very large field. I hope this points you in the direction you seek.

EDITED: After reading B. Lorenz's answer (I voted his answer up), it would depend on how far in the future we are talking about. The question is kind of vague, so I stuck with what we have today.

However, It has been alleged that CERN has already created mini black holes in its Hadron Collider. Since the question does not state how far in the future this will occur, if it is 500, 800 or 1,000+ more years from now, we might have the technology to build a Ghostbusters-like device that sucks in entities that are not only light, but other forms of light energy particles and atoms as well.

This trap will not keep the entity alive like the other solutions I propose. This will kill everything that enters it.

The one thing we need to worry about is the Hawking Radiation and Gamma Rays that may shoot out the open end if the black hole fills up, or if it spins and creates an event horizon, the device could explode, and kill every living creature on the planet.

But 1,000 years from now we'll have a process in place to maybe use the device once and shoot it at the Sun. Since the black hole will kill it, there should be no risk of it coming back after the device burns up in the Sun.

Below are some photos of some of the traps I discussed here, and I will do more research as there should be some peer-review papers on this topic that I can add to this answer, if this doesn't answer your question. 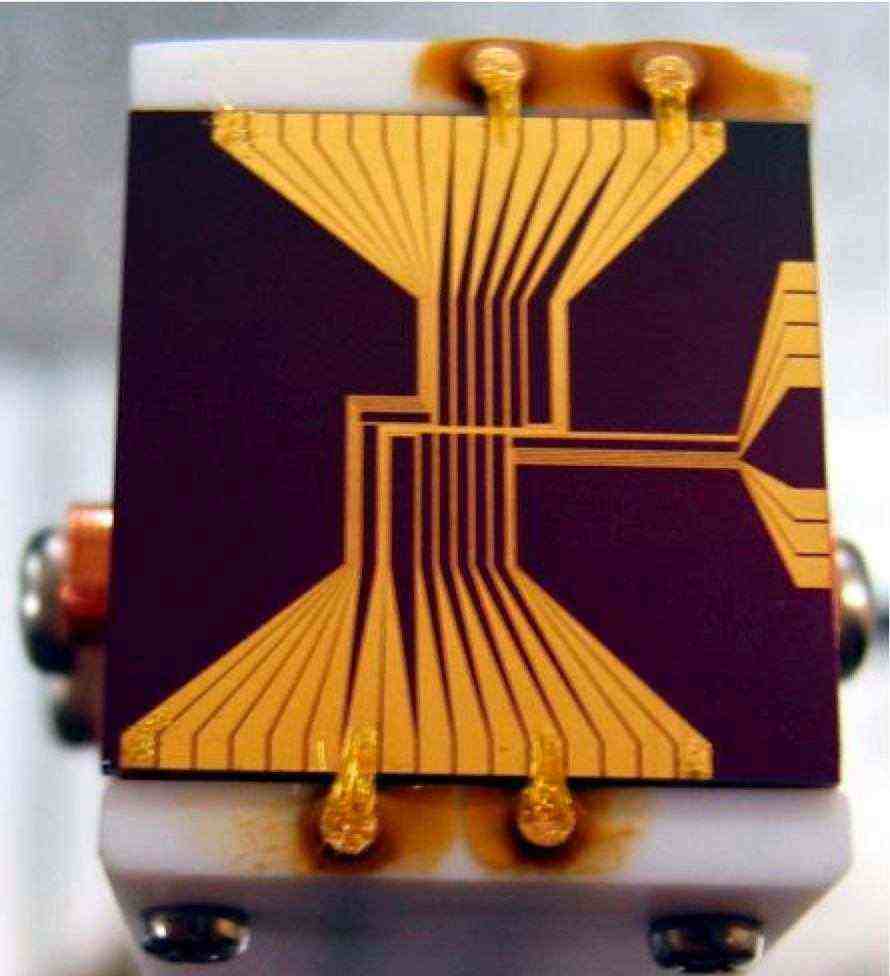 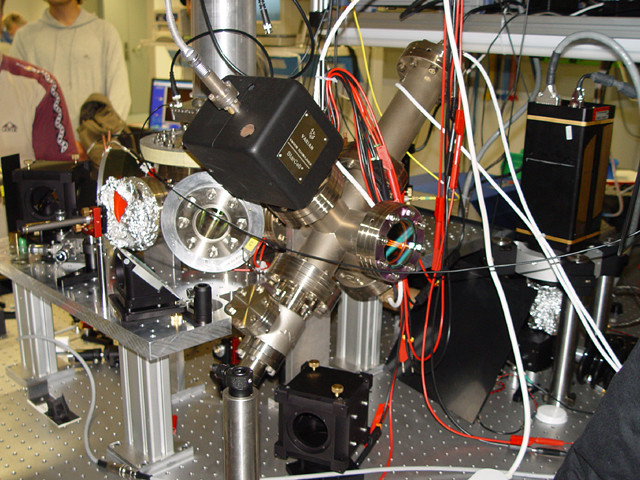 Ion trap, shown here is one used for experiments towards realizing a quantum computer.

Energy beings are themselves rather difficult from a science perspective.

The problem is that energy generally flies apart in all directions, which is not what you expect a "being" to do.

You have also tagged this "supernatural", which is good in the sense that you can say "Magic keeps it together". However, that is not very scientific.

Whether you call it magic or not, your being has solved the problem of staying in one piece somehow.

You scientists can maybe duplicate this effect, putting the being in a "bag of its own skin". Without knowing how the magic skin works, it is hard to be more specific.

Another possibility is the "pain fence". If the being approaches the limits of its "cage" it will get a jolt of pain that makes it retreat. For an energy being you will need a full cage with both floor and ceiling to keep it contained. If the being is not able to stay off the floor this is quite cruel.

This pain can be caused by energy jolts of some sort. Electricity is probably the easiest. While the being probably eats energy, getting too much at once will be painful.

If the scientists don't know what they are doing they have two problems. They can accidentally feed the being and make it too strong to handle. Or, they can use too much energy and accidentally kill the poor thing. Avoiding one problem causes the other.

Another source of pain is something that counteracts the "magic skin". This is more a "barbed wire" type of fence. Step too closely and you bleed. Again, they have to be to be careful not to kill the being, but in this case the opposite problem is not the being getting stronger, just getting loose. (Bleeding, angry...)

If the being can take the form of any energy, trapping it inside a black hole would be a good solution. Even if it becomes light it can not escape.

But, of course, it's quite hard to make a black hole, and they won't be able to study the captured being. (or extract any information from the black hole.)

If the energy being only uses a small frequency band of EM spectrum, they would be able to use a much more feasible cage. If it's visible light, mirrors will prevent it, if it's microwave, a resonant cavity made from metal... The problem is, that we could expect, that in this case the being would travel with c. Therefore they should have a very fast mechanism to shut the cage door.

But if the being are to high energy, (eg. gamma ray) they would be forced to use a black hole.

Not the answer you're looking for? Browse other questions tagged science-based technology physics energy-beings supernatural or ask your own question.

18
How to kill an energy being?

3
Weaponizing the reverse assembly or partial disintegration of matter
77
Concealing my earth-changing invention
1
In a SciFi world, how could a “suit” cary 1000X+ times the wearer's weight/volume?
3
Warp drives without exotic matter?
16
What sort of rules / limitations could govern and affect a crystal resource that is both anti-gravity and energy-producing?
20
How would a physicist explain this starship engine?
2
What kind of faster-than-light travel is this and is it at least plausible?
3
Is there a way to trap a super-being like Dr Manhattan?
21
What are plausible faster than light methods for a far advanced civilization that aren't a warp drive
3
What natural barriers can exist to prevent a multi-purpose demon seal from being created?