I've read that even in a "perfect" vacuum, matter exists in the form of virtual particles that spontaneously pop into existence only to be immediately annihilated. This suggests to me that it might be possible to use these particles during their short existence as a propellant by accelerating them before they annihilate. Problem is, this seems to violate the conservation of momentum because the virtual particles would immediately cease to exist after their mass is accelerated to create momentum.

My question is this: what would be necessary in order to get around the conservation of momentum issue here?

My question is this: what would be necessary in order to get around the conservation of momentum issue here?

This is the more conventional of the two options, and ignores virtual particles.

E=mc^2 is often mistakenly described as the energy you get by converting mass into energy. This isn't really what it says. It says that energy and mass are equivalent. That's why it's known as the Mass-energy equivalence. Even E=mc^2 is only the special case for mass at rest, but there's no need to get into that.

You can rearrange the equation to read m = E/c^2. This means energy, for the purposes of calculating momentum, has mass. If you fire enough high energy photons out the back of a spacecraft you will get thrust. This is known as a photon thruster or photon rocket.

Photon thrusters are extremely inefficient. Because c^2 is very large, like 9e16 m^2/s^2, the thrust is very, very, very low. 1 GJ, roughly the energy in a lightning bolt, has the rest mass of about 10 micrograms. You're better of using that energy to fire out a small amount of mass at very high speed; then you have an ion thruster, one of the most efficient thrusters currently available.

But as efficient as they are, even ion thrusters will run out of mass. So long as there's energy available, like from solar panels, you can get thrust out of a photon thruster. Over a long enough time it can add up to something noticeable. Photons from waste heat bouncing off the inside of the craft in an unbalanced fashion is what caused the Pioneer Anomaly.

The infamous EmDrive being tested at NASA is supposed to work with no reaction mass and a higher efficiency than a photon thruster. 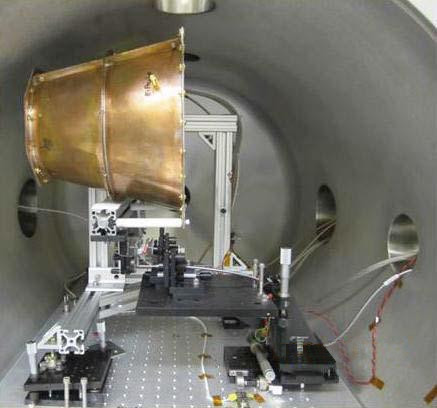 They did measure a thrust in a vacuum and at different orientations ruling out a lot of errors. It did pass peer-review; Measurement of Impulsive Thrust from a Closed Radio-Frequency Cavity in Vacuum.

The hype on this got out of control, so let's reign it in. No, NASA did not prove the EmDrive works, but they did eliminate a lot of potential conventional explanations. The paper claims to have observed a thrust of about 1.2 mN/kW in a vacuum (which is very, very low), at different orientations, and at different power settings. They don't speculate on why, but they do note it's about two orders of magnitude over what they'd expect from a photon thruster.

The 1.2 mN∕kW performance parameter is over two orders of magnitude higher than other forms of “zero-propellant” propulsion, such as light sails, laser propulsion, and photon rockets having thrust-to-power levels in the 3.33 – 6.67 μN∕kW (or 0.0033 – 0.0067 mN∕kW) range.

There's any number of non-crackpot conventional and unconventional explanations including pushing off of "quantum vacuum virtual plasma" but other physicists say that's not possible.

Most physicists are EXTREMELY skeptical that this actually works. Because the thrusts involved are so low, because existing quantum theory is so successful, and because the error bars on this experiment are so high, their money is on experimental error. 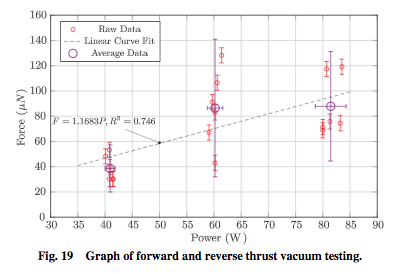 Here's a bunch of physicists and rocket scientists on the EmDrive.

We won't really know until it flies in space, even then I expect physicists to remain very skeptical and call for more experiments to eliminate all error.

But hey, probably good enough for a sci-fi story!

You don't need mass to have momentum

Photons are mass-less particles that have momentum. As @b.Lorenz points out in the comments, the do have a relativistic mass, since they have energy and by relativity energy is equivalent to mass. But they do not have a classical mass.

The particles that you are talking about popping into existence seems like the electron-positron pair that form from high energy gamma photons. Since the photons are required to produce this pair, any momentum you could get from them would also be in the photons that formed them (due to conservation of momentum).

I think you got a wrong grasp of the theory: in vacuum pairs of particle and antiparticle are created and immediatly annihilated. Momentum is conserved here. The only known (but not yet proven) mechanism that materializes these virtual particles it's the event horizon of a black hole: any pair which materializes on the horizon is separated by the gravitational pull. The half within the horizon falls into the black hole, the half after the horizon can escape the black hole as a real particle. This is called Hawking radiation.

Therefore it looks pretty unpractical to have a black hole in a starship to propel it.

Basically it is a gigantic particle accelerator that instead of accelerating the virtual particles "steals" momentum from them.

The process of polarizing the emergence of virtual particles from the quantum vacuum is a purely hypothetical concept. Hypothetical to the point of calling it a fiction as there is no known physical mechanism to justify or explain it. But it could pass muster in science-fiction.

The scale and power of the linear particle accelerator required to transfer momentum from the polarized virtual particle flux is uncertain, but is presumably many orders of magnitude beyond anything that human technology can achieve in the foreseeable future.

Some descriptions of this phenomenon instead say that the energy of the system becomes uncertain for a short period of time, that energy is somehow "borrowed" for a brief interval. This is just another way of talking about the same mathematics. However, it obscures the fact that all this talk of virtual states is just an approximation to quantum mechanics, in which energy is conserved at all times. The way I've described it also corresponds to the usual way of talking about Feynman diagrams, in which energy is conserved, but virtual particles can carry amounts of energy not normally allowed by the laws of motion.

Consideration of issues about virtual particles in relation to momentum and energy conservation is a good idea. However, quantum mechanics has definitively answered this: the conservation laws apply and aren't a problem.

Note: For those who care about this sort of thing: The hypothetical virtual particle propulsion system proposed above is undoubtedly a form of Maxwell's demon and would have all the usual problems associated with it.

Minami, Y. (2008) “Preliminary Theoretical Considerations for Getting Thrust via Squeezed Vacuum”, Journal of the British Interplanetary Society, Vol. 33, No. 7, pp. 315-321.

Fiction where the concept has been used:

Not the answer you're looking for? Browse other questions tagged space physics hard-science or ask your own question.

1
Could a photonic engine actually work?

17
Accelerating, then decelerating, without expending energy or propellant in space?
3
Chemical element made with alternative particles
109
Would planets be cubic in my "cuboverse"?
2
Localized manipulation of the speed of light
3
Ultrapowerful chemical propellant for guns
1
What would a darkness effect capable of blocking all electromagnetic radiation probably do?
10
Metallic Hydrogen Propellant