In my world, the dominant life-form is sentient cats, brought by humans to the Earth-like planet K-IIT98 as pets in a mining operation. After the workers left this planet, the cats became the dominant species. They evolved to be 2' long with very strong prehensile tails that allowed them to use tools. After 5000 years, the first primitive kingdoms began to take shape. Conflict is very common.

Notes: My cats already use fire, forge crude but effective weapons, and communicate verbally. They are 100% bigger and stronger than a domestic cat. They are on the equivalent of early Iron Age. The Felis Sapiens prefer living in the top of mountains near bodies of water because its an easy place to get food. The cats are still quadruped. 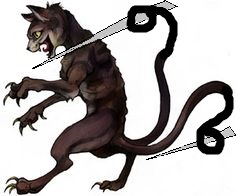 Whilst the preference of evolution would point towards a tool-using appendage being near the eyes and mouth (feeding yourself and at least seeing what you're doing) there are still possibilities for their evolution. The most likely scenario is one where they evolved to grip with their tails to climb/manage difficult terrain. On earth we have these tails in all sorts of animals, monkeys, marsupials, mice etc.

Based on earth creatures we see prehensile tails used for climbing, anchoring in bad weather and carrying. We can assume our creatures evolved their tail for other uses and then, as they became more sentient they realized the tail could be used for other things.

So we don't have just one question here but if we decide on weapons that would be used we can narrow down the others.

Throwing weapons I would imagine the long tail is useful for projectiles as some form of Atlatl to provide more power and stability to the spear. Though here we should note that the whole body needs to be used, it is unlikely the spear could be thrown any distance from tail strength alone. I imagine the spear would be held in the tail and then, after a couple of bounds, the front half would bear down and the back end buck upwards, providing extra power to the throw.

The problem we reach with melee weapons is the fact that the tail is unlikely to be well protected, it is mostly muscle which can be cut fairly easily. Armouring the tail would reduce its flexibility drastically and it is unlikely to have enough strength for iron-age armour to be practical protection whilst keeping the tails useful. If your opponent holds their weapons in their tail and you focus your blows on those you could well sever the tails and leave them, mostly, harmless. Training in using a melee weapon in your tail would not lend itself well to holding a weapon in your paws.

It could well be that it pays the front-lines to already have their tails cut off and cauterized before any battles to remove the easy target that could result in them bleeding out on the battle field. This would take some getting used to but they could still balance okay with practice - perhaps something which is done to younger potential soldiers.

Long flexible melee weapons would suit tails best so things like whips, light maces and such. Swords would be difficult to support against a parry. As such the body of the front lines should be well armoured and their tails (if you want to keep them) should hold such weapons.

Without the tail you could have blades attached to the armour on the front legs (since the paws aren't suited for grip). That way the body can support the blows a little better.

In the end, though, there are many possibilities and the only limit is your imagination.

I would have the prehensile tails hold onto overhangs, freeing the forepaws for use in delicate work.

Also, what do you get with a furred creature working at a forge? The lovely smell of burnt fur. Though that won't be the only issue. They don't have the body mass to swing a hammer hard enough to work iron or steel. Silver, gold, or copper? Yes. Bronze or brass? Maybe.

They would need the body mass of at least a jaguar (probably more) to hammer steel without mechanical help.

Castles would have to have very smooth outer walls if they want to do anything other than just slow down the enemy. I think that there will be very few stairways. They might just use angled logs. For up only, they could use vertical logs but cats have a hard time going down those. One defensive possibility would have vertical logs on the inside of a wall. that would allow defenders to quickly reach the top of the wall but attackers will have a hard time getting down. The defenders could then have ramps in the city that can be brought to the wall when danger is over to allow easy egress.

Make sure that nothing is within jumping distance of the wall.

Not the answer you're looking for? Browse other questions tagged creature-design warfare weapons engineering .

1
How could you make a cat's tail prehensile enough to use weapons?
1
How could sapient dogs develop 17-century technology without having hands?

38
What would be favoured weapons and weapon styles of a four-armed human?
22
Multigeneration ship pet
16
How would a tail affect fighting styles? Or would it have basically no effect?
14
What stops a race of giants from wiping out humanity?
15
How do you make a gun that shoots melee weapons and/or swords?
6
How would a race of horizontal lizard men fight, and how would humans fight them?
4
Time Dilation and Melee Combat