What environmental effects (if any) would ever cause blue to be a colour that a plant would choose as an evolutionary advantage?

Bonus: I'm looking for light blue plants as a preference.

EDIT: Thank you for all the answers about how plants are capable of looking blue using Phycocyanin, or variants of Chlorophyll, but I'm looking to see why a plant might choose this evolutionary path.

Plants would be blue if their photosynthesis were based on phycocyanin instead of chlorophyll. Since there are organisms on earth that use this, it's not entirely implausible that it could be used also by higher plants in an alternate world.

So what environmental effects could cause phycocyanin instead of chlorophyll to be the dominant photosynthesis substance?

Looking at the chemical formula, phycocyanin only consists of carbon, oxygen, nitrogen and hydrogen, substances you find in almost every organic material. On the other hand, Chlorophyll contains a magnesium ion. So one reason for plants photosynthesis being phycocyanin based could be if the world happens to have no or very little available magnesium.

Another possibility, which was already mentioned in other answers, is if the central star has its maximum in the red part of the spectrum (for example, a red dwarf — somehow in all my answers I seem to end up finding you need a red dwarf :-)), so blue absorption would not be very advantageous. The same may be true if the atmosphere has a strong absorption of blue light, so not much of the blue light of the star reaches the surface.

The chlorophyll within the plants would have to be adapted to absorb the Green spectrum rather than the Blue, on earth plants absorb the Blue & Red spectrum and reject the Green. This causes them to appear Green in colour.

If the chlorophyll were to change in some way, or a different molecule or technique was used by the plants to convert sunlight to usable energy then the colours they appear will change.

Far more depth and explanation (far better than my shoddy attempt) is given here:

The earliest life on Earth might have been just as purple as it is green today, a scientist claims.

Ancient microbes might have used a molecule other than chlorophyll to harness the Sun's rays, one that gave the organisms a violet hue.

Chlorophyll, the main photosynthetic pigment of plants, absorbs mainly blue and red wavelengths from the Sun and reflects green ones, and it is this reflected light that gives plants their leafy color. This fact puzzles some biologists because the sun transmits most of its energy in the green part of the visible spectrum.

Edit: Celtschk's answer gives the real-life alternative of Phycocyanin to Chlorophyll. This gives a slight, yet visible blue-green tint to Cyanobacteria (blue-green algae) which it is found in. 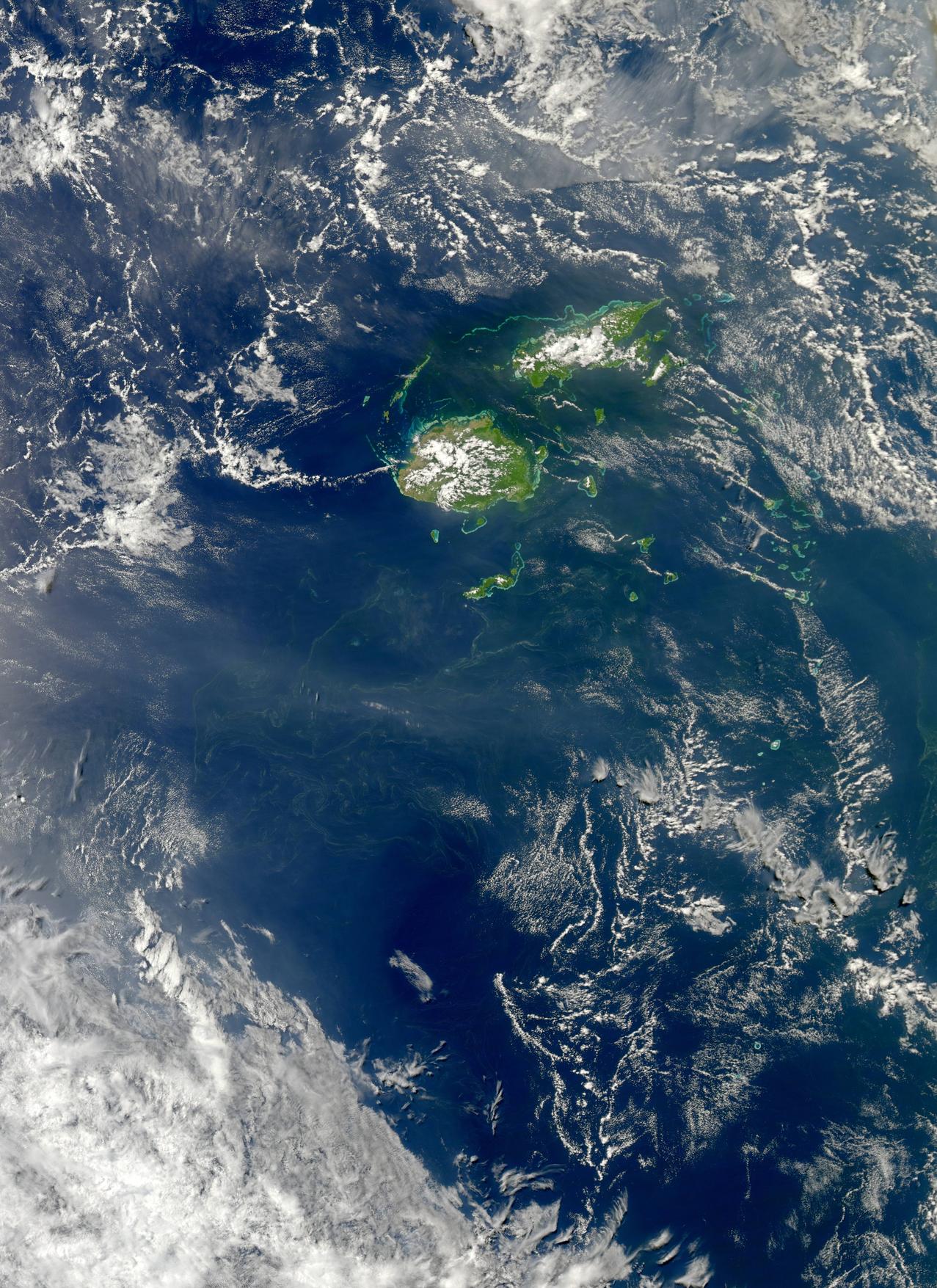 Blue would actually be a better colour for terrestrial plants to be than green, if there was a photosynthetic pigment that colour that approached that of chlorophyll in efficiency, as the sun's peak light output is in the green part of the spectrum, and a blue pigment would not reflect as much as a green pigment would.

Also, if the sun your proposed planet orbited was redder, a blue photosynthetic pigment would be even more useful, as redder stars emit less blue light than our own sun.

There are a number of different photosynthetic pigments that have evolved on Earth, some reds, some greens, and one purple. Not all of these pigments/proteins produce oxygen as a photosynthetic by-product, some produce hydrogen sulfide (H2S)

There is no reason why a blue photosynthetic pigment might not occur, however it is more likely to be a dark blue or a mid blue than a light blue, as darker colours absorb more energy. However, purple at least has the advantage of having already been done.

Having less blue light available has been mentioned in several answers here. While that may lead to plants that absorb other colours and reflect the blue, they would not necessarily appear blue to the eye since there is so little blue in the environment. This could just make them appear black, or at best dark blue, whereas the question asks for light blue.

Very few photosynthetic chemicals have been discovered by organisms on Earth. This suggests that the colours we see are more due to what chemical happened to be found first, rather than the natural selection of the best colour from a large number of pigments. Even in an environment identical to Earth's, different colours may emerge just by chance.

An environment that actively favours light blue may not be one that forces a change from chlorophyll, but simply one that demands that leaves have other sources of colour apart from photosynthetic pigments. This is likely since the question specifies light blue, which means not only reflecting blue light but also reflecting a proportion of all the other colours too (just reflecting blue light would lead to a mid blue).

An environment may encourage other pigments in addition to the photosynthetic pigment. If these other pigments are more reflective than the photosynthetic pigment and present in greater concentration, then their colour may dominate. For example, on a planet with harsh radiation plants may need to have pigments that reflect away most of the light to avoid damage, only using what little light gets through these protective pigments in order to photosynthesize. This would give the leaves a pale colour due to reflecting most light, and the particular pigment or pigments used to do this may result in this being pale blue. A peak at the blue part of the spectrum of the incoming light would provide a selective pressure to produce more of the pigments that reflect more blue light, to give the most protection there. The result would be pale blue leaves. This could also lead to pale blue trunk and branches, and quite possibly pale blue animals too.

Other methods of extracting energy from light

Photosynthesis is used by plants on Earth to extract energy from light using chemical means. On another planet, this might not be practical, or it might simply not happen to evolve. In that case, plants may evolve that use physical means rather than chemical - perhaps using the light to induce a temperature difference along the trunk which can then be used to drive electric current to power chemical reactions (roughly the opposite of the process occurring in the nerve cells of animals).

Such plants may have a very long dark trunk to absorb as much light as possible, then branching out at the top into a canopy of very light coloured leaves to reflect as much light as possible. This, combined with roots seeking out warmer earth below, would produce a temperature gradient sufficient to at least supplement its energy requirements during parts of the year, and possibly provide all of its energy.

The reason most plants are green on Earth is because their leaves contain a large amount of a chemical called chlorophyll which is used in photosynthesis (creating energy and oxygen from sunlight).

Many scientists believe chlorophyll is green because it absorbs both the red and the blue areas of the spectrum and reflects the green regions. If your sun produced less blue light then it's likely that your plants would evolve to feed off the red/green parts of the spectrum instead. The result would be that blue light is reflected for us to see.

Another alternative is to forgo photosynthesis altogether, after all on an alien world plants may behave very differently. Maybe they take nitrogen straight out of the atmosphere using a blue coloured chemical instead?

If the atmosphere preferentially absorbs blue light (due to some gasses present) then there would be no advantage for leaves to absorb it themselves and in trying to efficiently gather the radiation that does reach them they may well end up reflecting blue light.

Equally if the sun didn't emit much blue light (for example a red giant star) then you might get a similar result.

You need the light reaching the plant to have the characteristics that make blue the most efficient color for absorbing the light and making use of it.

Alternatively if something in the environment made the techniques plants use here on earth not viable (for example a chemical that damages chlorophyll present in the air) then alternative techniques would need to evolve, and those might result in blue leaves.

The primary reason as to why plants are green is because it strikes a balance between not having enough energy to photosynthesis and denaturing its own enzymes by having too much heat. For there to be a shift in what colours are reflected away, part of this equation would need to change, probably the heat. If the world was colder, or for some reason plants were much more efficient at dissipating heat then this equation would change as they would be able to deal with more heat. There would need to be very specific conditions in place or they might well be black rather than blue, and obviously these plants would need to be able to survive at cold temperatures.

A plant can use methylene blue and one of many blue chemicals to protect itself from an environmental stress, chemical, physical biological.

There are very many pigments and oxidated metals that are blue, In the deep ocean, only blue light exists so that may have an effect on a photosynthesis, and the same may be true in planets where the useful wavelengths cause blue to be reflected.

If very strong radiation exists on the planet and the plant develops a particular protection to UV/Xrays from a nearby astronomical body or something, certain light filtering chemistry may cause the plant to reflect blue.

If for some reason the animals percieve differently due to a copper based animal life form, a plant can be blue in order to use it's symbiosis/commensal animals the same as blue flowers. Blue is one of the most common flower color due to the vision of insects.

Not the answer you're looking for? Browse other questions tagged science-based biology planets flora .

13
How to evolve blue skin?
12
Would co-orbital planets with very similar convergent evolutionary paths be possible?

24
What effect would liquid sulfur oceans, sulfur dioxide in the atmosphere have on visibility, sound propagation and other environmental information?
6
Where do you put a photosynthetic Dyson sphere?
6
How much Light energy would it require to run an underground Photosynthetic ecosystem?
25
Purple soil - how would it be possible?
8
Given an apparent solar brightness of <30% Sol from Earth, how differently would plants evolve?
29
Can a planet harbor plants of different colors without one pigment outcompeting the others?
13
Potential causes for generational deafness in space colony
1
Properties of a planet roughly four times as big as Earth
11
Augmenting melanins with Prussian blue?