Quick question: The feasability of this plasma cannon

The plasma cannon is a weapon, that fires a continuous beam of plasma (with this, it can be sustained by the weapon, while it's fired) which is confined by a helical magnetic field. It's usually used as a cannon (hence its name), but with a sufficient battery technology, it could theoretically be used as a handheld weapon.

And it has a great tactic against magnetic fields, that is demonstrated in the following situation:

The challenger will probably get's the answer to his question in hell.

What's to keep the target from manipulating their magnetic field?

Note that there are a number of reasons that could prevent that but you should know the answers if you are using it as a plot point.

How far can the plasma get before it cools down enough to condense back to a normal state?

That will probably be relative to the speed the plasma travels. Unless you can contain the heat in the beam, the cooling rate in a vacuum (vacuum assumed) will be fixed.

Flaws:
1. A bullet would probably be cheaper.
2. The energy concentration required to ionize and superheat gas could probably be used for something more productive. Like propelling a bigger mass.

Despite what the movies show, magnetic fields are only really useful when dealing with charged particles and ferromagnetic objects. NOTE: PARTICLES. A lead bullet is neither, and would simply go straight through a magnetic field. Unless the field is sufficiently strong as to deflect high speed paramagnetic objects, in which case, the user better be safely inside a shielded suit or they'll get ionised.
In any case, the shield is easier to overcome by simply increasing the calibre of bullet used, rather than using exotic technology.

The alternate approach is, as you have suggested, flipping the magnet. Do it fast enough, and you get an electromagnetic transmitting antenna. Properly focused, this gives you a microwave transmitter, which will give you a better energy transfer per joule supplied than your plasma cannon. Something like the US military's Active Denial System.

What you've suggested is similar to Tesla' Teleforce or "death ray". To my knowledge, nobody has been able to make it work.

Let me rephrase your question: if I know my enemy has a flamethrower, should I keep wearing straw suits? Now back to your question. These are the flaws I spot.

First flaw: you don't want to bring strong magnetic fields on a battlefield, for the simple reason they are like wearing a light turret on your head while crossing a dark field: it attracts everyone's attention on you, making you easily detectable. Even without fictional plasma cannons, there are real mines which are activated by magnetic fields, enough of a reason to remove all the magnetic field one can remove.

Second flaw: quickly changing a magnetic field alway come with a related induced current (blame Maxwell and his equations...). It's going to be a really (electro)cute weapon!

Third flaw: if the target is locked to you, you are locked to him. He can back fire simply on detecting a "locking", while you are still setting up the discharge. 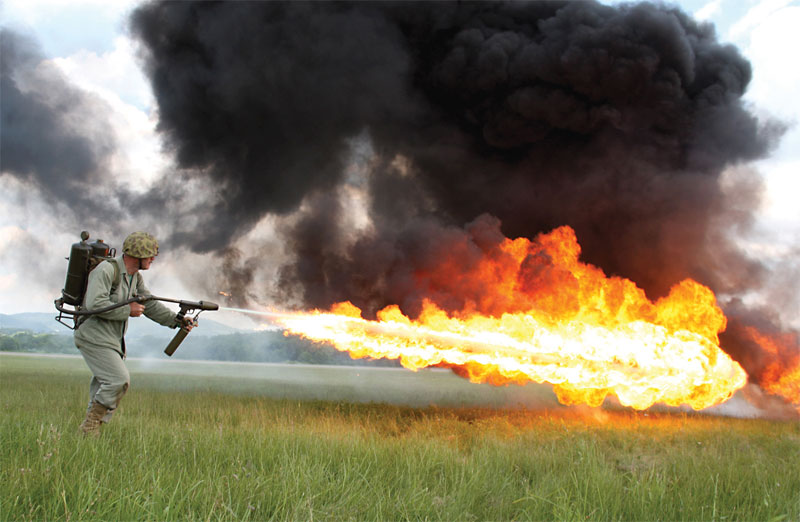 Notice how far from the operator the flame starts. And that's for a flame that isn't even that hot, at least not compared to plasma. A plasma cannon will generate an intense burst of heat that is maximized at the point of emission. How are you going to protect the operator from that?

Another two problems that I can see:

1) plasma, being ionised gas, is not "flame". Its heat is dependent, in systems that we are able to create, on induced current, and its stability is dependent on magnetic containment in a vacuum. Thus, firing a stream of plasma into atmosphere, will just disperse the stream after short distance (short as in centimeters, not any real weaponisable range). To counter that, ideally, your weapon needs to create a containment of some sort, on the beam's way to the target. This is both technically hard (as you cant really project a magnetic bottle over large distances easily), and needs a huge energy budget.

2) plasma will not only emit thermal photons (i.e. heat), but it will also emit ionising radiation (Brehmsstrahlung / cyclotron radiation, X-rays, stray protons...). If you want the weapon operator, and anyone in his general area, not to get acute radiation injury, you will need quite heavy shielding to mitigate that (assuming you want high power levels in your weapon)

Not the answer you're looking for? Browse other questions tagged science-based reality-check science-fiction weapons or ask your own question.

4
Critique this Plasma Weapon Design
3
Quick Question: Ionocraft with nanotechnology?
28
Hallway cannon, the last way out
1
Is this twin particle cannon feasible?
7
Feasability of plasma based garbage recycling into pure constituent elements
3
Are there any issues with this FTL drive concept?
29
Is my plasma cannon concept viable?