Where would deserts form on this world?

I think the mountains are positioned well. I used Fractal Terrains.

So, in order to predict where deserts would be likely to form on your map, you would need to know where the equator is, which direction your world rotates, and how cold it gets near the poles.

Greg Gellene has already given factors that should be taken into account and I'll try to put deserts and the whole climate assuming that everything but land location and hypsometry is similar to the Earth.

The main model was the map from article about Köppen climate classification, that was the first climate map I found with projection similar to your map's projection.

This is only a try and I'm not sure how correct it is. 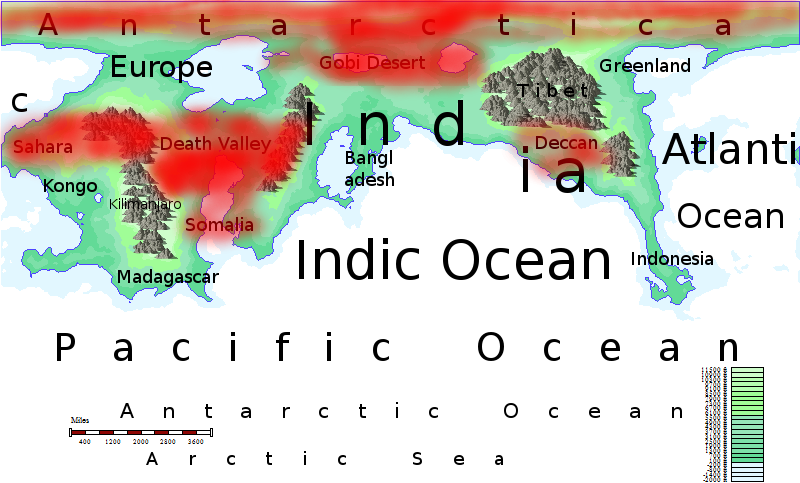 "Antarctica" should be as cold and dry as the real world one (ice desert). More lands may make it colder and dryer, but disrupted currents can to some extend neutralise this.

The "Atlantic Ocean" seems to be similar to the northern part of t.r.w.o., so a current similar to the Gulf Stream probably makes "Europe" warm and wet and analogy between "Greenland" and t.r.w.o. suggests that they are similarly cold.

"Gobi Desert" is quite near the pole and deep inside continent, so it probably a cold desert. Inland seas are probably not important.

"India" are probably dominated by a monsoon (between big continent and a sea), so probably are not dry the whole time. "Bangladesh" is probably the wettest part of "India" with ocean to the east and "Deccan" — the driest part due to being behind mountains (on the other hand, I have just realised that the monsoon from ocean could stop on "Tibet" and make "Deccan" very wet at least during part of the year).

"Death Valley" is between mountains and located in big part in the desert zone, so probably is very dry and warm. May also have some similarities to Egypt and the Arabian Peninsula with the Red Sea, but these are all deserts.

"Sahara" and "Congo" (I'm sorry, I forgot that English uses often C where Polish has K) locations are analogical to t.r.w.o., so they have probably similar climate and there is savannah between them.

Actually I'm afraid that the locations of the mountains may be hard to justify from the point of view of plate tectonic. So "Tibet" is big high region inside continent (but if I understand your map well, lacking something like Himalayas from the main continent crash) and other mountains are not very similar to real word ones - they are inside the continent and actually are all most similar to Kilimanjaro or the whole Est African Rift (but without the rift itself).

Analogy with Africa extends to "Somalia", that like t.r.w.o. is dry due to being behind the East African Rift (near equator wind blows from the west), if I interpret it correctly.

"Indonesia" may be analogical to the real world Indonesia or to Central America (continuous land, not islands), but they both are relatively wet.

"Madagascar" is again in the desert zone, but it has sea if not to the east, than to the south, so I assume that it is relatively wet, like t.r.w.o. Southern "Indonesia" should also not be dryer than western Australia.

Then one big ocean begins. The "Pacific Ocean" may be really calm as big temperate ocean, but I'm not sure at all. Maybe temperate oceans are actually dominated by storms. The "Antarctic Ocean" is similar to t.r.w.o. - uninterrupted cycling currents. And the "Arctic Sea" (of course my mixed Arctic and Antarctic do not make sense etymologically) is the centre of this cycle so I think that even without lands it could freeze as a kind of inverted (cold) Sargasso Sea.

Not the answer you're looking for? Browse other questions tagged geography worldbuilding-process or ask your own question.

10
What would the weather on this continent be like?
6
Are the mountains and rivers on this map okay?
5
Can a planet have soil in form of powdered gems?
10
How might a mountain bowl form?
19
Could terrain like this form on Earth? If so, how?
3
Would this be a plausible coastline + river combo?
4
Where else would mountains be on this continent?
10
How to create a realistic river without knowing the whole map beforehand?