I have an idea on how many people can work and live inside each of the three chosen shapes.

I've received nothing on a reasonable cross-section of each shape. 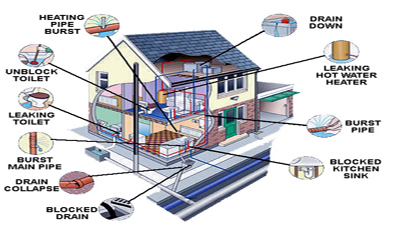 This sort of mapping is practical in an ordinary building, but will it work on an eight-square-mile pyramid, a four-mile-tall-six-wide cylinder and a cube spanning 140 square miles? If the answer is no, then what other methods of plumbing must be taken into consideration?

The ultimate shape of your building or its facade makes no difference. Almost all buildings are made out of a series of rectangles, no matter what they look like, and with good reason (manufacturing). Take for instance, Sears' tower.

This building style could easily produce nearly any shape. The sections would just have to end at the correct heights and be capped with, or have a facade with, the correct geometric shape.

As for its plumbing system, it employs an "express riser" as its main stack. Which unlike wet or standard stacks, can fill completely without the danger of sucking water out of traps on sinks and toilets because all fixtures upstream of it have their own vent at the top of another stack.

And there is no fundamental difference between a two story building and a taller one, "from a waste velocity standpoint", but your pipes must be sized properly to handle the volume of water. As would your city sewer system. Underneath your gigantic buildings would be vaults large enough to fly around in, like in The Matrix.

One means of controlling the pipe sizes and potential pressure fluctuations in very tall stacks was employed in the design of the Sears Tower (now the Willis Tower) by using intermediate building drains connected to an express riser that had no fixture connections. The beauty of this design is not only in reduced pipe sizes, but in the fact that the express riser had no fixtures connected thereto. Any pressure surges occurring in the express stack would not impact the operation of any of the building fixtures.

Increased vertical population acts to stress the demand on the piping system. It has long been known, due to the work of Dawson and Kalinske in 1939, that water traveling down a vertical drainage pipe will reach its terminal velocity in about 14 feet. So, from a waste velocity standpoint, the difference between one story and 100 stories is essentially moot. –plumbingengineer.com

The real hard part is properly sized HVAC systems. Sears' tower has several floors devoted entirely to mechanical systems (all those floors with no windows; the dark bands shown in the picture) which are largely populated by heating and air-conditioning systems.

It may also be of interest to note that Sears' tower doesn't use wire to bring electrical power up, it uses bus-bars. Which are basically isolated I-beams running the entire height of the building, supplying it with three-phase power, which then wires are attached to, per floor.

Not the answer you're looking for? Browse other questions tagged reality-check cities construction health or ask your own question.

27
What architectural tricks can I use to add a hidden floor to a building?
13
Architectural feasibility of a tiered circular stone keep
9
What are minimal changes to make truncated pyramid-shaped megabuildings a thing?
2
Megacity Shapes, Episode 1: Population Capacity

11
Floating buildings on Venus. What shapes are credible?
2
Megacity Shapes, Episode 1: Population Capacity
5
Logistics of high-quality lifestock delivery for alien megacity?
13
Could a Megacity be a Penal Colony?
4
Terraforming the Nine Earths, Episode I: Could Cyanobacteria Thrive in Muspellheim?