I am trying to picture how space combat would happen with a sufficiently advanced level of technology (way beyond what we have today), and obviously defense from radiation would be a massive benefit to any vessel in space.

However, these spaceships will be attacking each other with directed energy weapons, anti matter warheads, fusion bombs, radioactive shells and the like. Additional protection from radiation would be a definite advantage.

From what I can gather (please correct me if I am wrong) but the best protection is to limit exposure, so reducing the time spent in the radiation and increasing the distance from the radiation source. But these forms of protection are not ideal for my purposes, especially when you have a blast of directed gamma rays focused on your position.

I imagine thick layers of lead (or something similar) on the hulls of our space vessels would be sufficient to block most forms of radiation, directed or not.

However powerful enough blasts of radiation caused by anti matter explosions or directed gamma rays could still cook a spaceship's crew alive even if the hull blocked 99% of the radiation.

Is there any other forms of potential defense from such radiation and focused gamma rays? Even highly theoretical technology can be considered here, as my civilizations are highly advanced.

Is there a form of defense I have not considered here? Or is this just a case of making the hull ridiculously thick?

Or is there literally no defense against a focused beam of directed gamma rays - even for a highly advanced civilization?

Gamma radiation, much like other forms of photonics radiation, isn't charged and moves (by definition) at c, so you are not going to have a force field or "Star Trek" shield to stop a gamma ray beams. Indeed, you have the same issue with lasers or even coherent microwave beams (Masers).

Reflecting or refracting high energy laser beams is problematic due to the incredible energy of each pulse (the mirror surface will be damaged and even reflecting 99% of the laser will still result in the absorption of a huge amount of heat in a small spot), and with gamma ray lasers, the problem is increased since there are no "mirrors" at that wavelength. 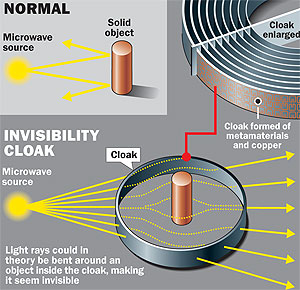 Now the real issue is how efficiently the metamaterial cloak can refract the radiation. It the material is absorbing even a small amount of radiation the heat load could damage the covering, reducing or eliminating its ability to refract that radiation. The other issue is metamaterials are "tuned" for specific wavelengths. It is theoretically possible to make a metamaterial cloak to cover a submarine and bend enemy sonar around it, or even shockwaves from earthquakes. So if you suspect an enemy spacecraft is coated in metamaterials, you could use a Free Electron Laser (FEL) and vary the wavelength at random intervals to find wavelengths the metamaterials are not covering and then damage the covering for the killing stroke.

I don't know if this is particularly plausible, but as gamma rays are a form of light, they could they be cancelled by a wave travelling 180 degrees out of phase by then.

You could have a system like noise cancelling headphones https://m.youtube.com/watch?v=hD2hRoB1SBw In this case you would still need some kind of protection on your layer of light detecting and emmiting cells, to stop them being damaged, but anything further in than them might be protected. (I'm unsure where the energy would go.) Possibly a similar system could be invented causing half of the incident light to be slowed so that each pair of newly seperated waves endsup travelling 180 degrees out of phase and so cancelling, but I'm no physicist.

https://m.youtube.com/watch?v=UA1qG7Fjc2A Probably not relevant, but interesting.

There are already devices called interfereometers, I don't know if a protection system based on these could work. https://m.youtube.com/watch?v=UA1qG7Fjc2A

I am a huge fan of the theoretical superheavy atomic weight 300+ elements. https://en.wikipedia.org/wiki/Island_of_stability

Instead of lead or gold or uranium shielding, your ship could have Starheart shielding made of this stuff. Denser elements should mean better radiation absorbtion.

Another piece of the shielding that would be compatible with everyday osmium shielding would be a reactive component. Shielding atoms that absorb radiation get hot and risk transmitting that heat to the ship via conduction. If mixed with the shield were molecules that would volatilize when hot, tiny pieces of the shield could be exploded into the surrounding space as they heated up. In space the plume of heavy matter would still act to intercept incoming rays but now can shed heat only by thermal radiation. The increasingly hot heavy shielding matter might melt or even turn to gas but would still absorb incoming rays.

An entity aware of possible radiation attacks could detonate bombs of heavy matter in advance to serve as "space mantlets", the cloud of particles attenuating subsequent radiation attacks which had to traverse the cloud. This would be especially good for a fixed planetary installation which could launch the bombs up to explode in the upper atmosphere. Maybe add some cerium and iron for pretty sparks.

The glaring exception to me is AI (Artificial Intelligence).

AI as we presently conceive of it comes with it's own sensitivities (Electromagnetic Radiation will need to be blocked if computing architecture remains the same).

However with significant technological advances that needn't be a factor (unless it suits your story).

The key thing is, defending against radiation is because you want to protect humans. The obvious defense is to not have humans (or any weak fleshy life form) on the front-line.

If you have to transport humans (or others) within your universe, perhaps they would be escorted by an AI piloted defensive fleet, that would aim to intercept combatants at a distance to defend the organic weaklings from the conflict.

Although it isn't currently possible to block 100% of the emissions of gamma rays.

As a second layer it would be quite useful to use the cooling of the ships as protection, since the water helps to protect against neutron radiation.

With this we could create something similar to an insulated glazing that can be filled with water during combat, to make it a barrier of radiation. (It should be in the innermost layer of the shield to prevent leakage).

On the other hand could use a system similar to the decoy flare of combat aircraft, which could attract and absorb radiation.

Finally, it would also be interesting to use some generator of electromagnetic fields as a shield, considering the use of advanced technology could generate an electromagnetic shield to brake particles generated by radiation.

In a story I’m working on, a small craft is accelarated to rendezvous with a relativistic base via an ultra intense and tight laser. No ordinary material could serve as a target without burning away, but it uses a superconductive metamaterial tuned to be a perfect reflector for that wavelength and provide a heat sink for the reality of not quite being perfect.

As defense, you need to surround yourself with a cloud that acts as a nonlinear optical media. Normally it is transparent, even “cloaked” to keep your defense a secret. But passage of the gamma beam through the medium will organize and alter it, becoming opaque to that beam. Due to the intensity involved, we need to reflect most of the power. So the cloud suddenly becomes a milky white fog that disappates the tight beam by spreading it over a vast area, and reflecting most of the energy outward away from the protected center.

How spread out the particles may be depends on the shield’s thickness: as long as any incoming ray is guaranteeded to be interrupted by a particle eventually.

It would be especially wicked if the blocked beam’s energy could be used by the defender. So the attacker deploys a bomb-based (single shot) gamma beam weapon which he thinks is totally devistating to anything and everything, only to find the defender is not only unharmed but uses the energy to charge up his own weapons!

Thinking along that metaphor of the bad guy spitting the bullet back out at you, recall experiments where a cloud of energised atoms (possibly a BEC is used to stop a beam of light—pause and restart it!

I don't think it's a big problem.

With current technology we have only one way of producing a gamma ray beam coherent enough to be of any value as a weapon: A bomb-pumped laser. The laser is destroyed in the process and it's not a shipboard weapon at all--the only way you can use it is to eject the whole device into space and put either a lot of distance or a pretty substantial shield between you and it.

If you can put a substantial shield in the way then your target can do the same thing. While you could get some radiation through it wouldn't be militarily useful.

Thus you are limited to shielding yourself with distance. Oops--that means you just sent a delicate and expensive device (you need a very accurate seeker and pointer on board) out into space where your opponent can pick it off with an ordinary laser before it's gotten far enough away to safely detonate.

Note that such a scheme has been proposed for ballistic missile defense but there's no way it passes the practicality test even though the targets have no ability to shoot back.

Thus we are left with the reality that you have some way of manipulating gamma radiation. If you can manipulate it why can't your target? The same technology should be able to construct a reasonably effective deflector.

(Note that the same issue applies regardless of frequency. It's awfully hard to punch a laser through a mirror made of the same material as the mirrors in your own laser at any realistic combat range. This does not apply within atmosphere, though--the atmosphere will damage your excellent mirror.)

Not the answer you're looking for? Browse other questions tagged science-based space military-defense space-combat .

11
Klemperer rosette vs Relativistic Kill Vehicles
15
How to “set” the lightsail?
-2
On the deflection of really big laser beams

12
Space weaponry?
3
Weaponizing the reverse assembly or partial disintegration of matter
7
Antimatter planet on normal matter star
6
Could Nuclear Weapons Divert or Destroy an Asteroid?
1
Would it be feasible for a series of coronal mass ejections (CME) from the sun to cause E1 EMP damage to electronics on Earth?
6
How could living cells harness nuclear radiation for energy?
19
How would an antimatter reactor actually work?
9
Ways to detect lasers from afar
5
If the solar panels on a spaceship were able to convert gamma rays to electricity, how much more power would it produce?