Manhattan-sized asteroid, sitting on the ground?

I'm writing an SF novel concerning a superman who learns about the value of Ni-Fe asteroids and gets greedy.

So he locates a huge, 20 $\times$ 14 km, asteroid and flies it to earth orbit. Then he decides to lower the $1.8 \times 10^{13}$ tonne, Manhattan-sized chunk of iron down on the ground. I'm considering the desert southwest in the USA; he buys land out in the middle of nowhere.

How would that work out for him? Would the nickel-iron sink into the ground? Cause earthquakes? Will he get hammered with law suits?

Superguy has only the basic 4 powers--flight, invulnerability, strength, speed. No telekinesis, super ventriloquism, etc. The planetoid is potato shaped. What will happen under earth gravity if it's lowered at one point, ie, his 2 hands?

He can't do it

Assuming that this is one crazy strong man who can fly (a-la Klark Cent... No, not the other guy), this is impossible.

The reason is nothing to do with the man: It's to do with the weight of iron he's holding. Iron (and nickel iron) doesn't have the structural properties to be able to hold together while he lowers it to the ground. He might be fine, but as soon as he starts to slow the asteroid down and gravity really takes hold the iron will start to flow around him or, if crumbly enough, the edges will just start to fall away and re-enter of their own accord.

Whatever his clothes are made out of, use more of that unobtanium to make a sling capable of supporting the rock. If you don't want to completely wrap it up then you'd best have a degree in geoengineering, structural engineering and a couple of engineering disciplines we haven't even invented yet in order to keep it in one piece. If you do wrap the whole thing up the mass of iron will deform according to the folds of the material, heating as it does so and creating the weirdest variant on hung yoghurt ever. When he's slowed the rock down, put it on the ground and let go the asteroid will then flow outward over the surrounding landscape in a giant wave, scouring pretty much everything from it's path until it reaches some kind of equilibrium with the surrounding bedrock. If he's bought a big enough lump of land, cleared re-entry with the appropriate authorities and doesn't mind the ecological devastation then all that's left to do is mine and refine.

Use multiple friends or drones to help bring the rock down without breaking up. Again: You really need a few degrees and some good structural analysis equipment for this: plus an awful lot of help. Or some insanely good super-drones and a helpful robotic butler. The rock won't deform as you bring it down but it's still going to flow when you put it on the ground, generating a lot of heat and destroying pretty much anything nearby in a molten metal wave of doom.

Break it up in orbit and bring it down in small chunks with your super speed. You're pretty fast after all! Dig with your hands and deliver straight to the refinery. Cuts down on the land needed, the awkward business of negotiating air rights and bonus: No massive ecological destruction. Just don't go so fast that you accidentally superheat the metal with your hands. Also be prepared to spend a lot of your life mining this thing. If you think ahead enough you could potentially break it into large chunks that won't disintegrate as you bring them down and set up a 'meteor graveyard' mining operation. Just be careful as you do.

One last note: in 2015 the world produced just over 330,000,000,000 tonnes of iron ore (pre refining). You have five times that amount in near-refined product. Expect the prices of both iron and nickel to crash overnight.

I must disagree with Joe Bloggs. While at first glance his argument is right there's a problem with it:

It is obvious that kryptonite-phobe can somehow apply force to a whole object rather than just at the point of contact. There are two oft-repeated examples of this at work:

1) The manipulation of objects that by no stretch of the imagination could hold together given how they are lifted.

2) The acceleration of objects at crushing g levels, yet they are unharmed.

To a lesser degree we even see this based on his outfit. There are occasions where he has moved at accelerations that would have overcome any possible chemical bond holding his attire together--yet he has never been stripped naked even when chasing c.

And to take it farther he has been known to move at velocities that would be utterly lethal to nearby observers, yet they are unharmed. Thus I conclude that his flight is actually in some fashion a warp drive and that he can extend his warp field to surround anything he's touching.

Thus I can conclude he can land the asteroid. However, the problem isn't over yet. I suspect the asteroid does not have the strength to avoid collapsing under it's own weight. I am not going to bother to figure this out, though, because there's no doubt the ground underneath does not have the strength to support it. It is much denser than rock, this is the equivalent of a mountain 43km high. That is far beyond the tallest possible mountain--it sinks. Even when it has sunk to it's own depth it's still the equivalent of a 29km mountain--it doesn't stop.

The asteroid sinks into the Earth and doesn't stop until it reaches the inner core.

Figuring out the rate at which it sinks is too far beyond my knowledge, I'm not even going to attempt it.

Then he decides to lower the 1.8×1013 tonne, Manhattan-sized chunk of iron down on the ground. I'm considering the desert southwest in the USA; he buys land out in the middle of nowhere. 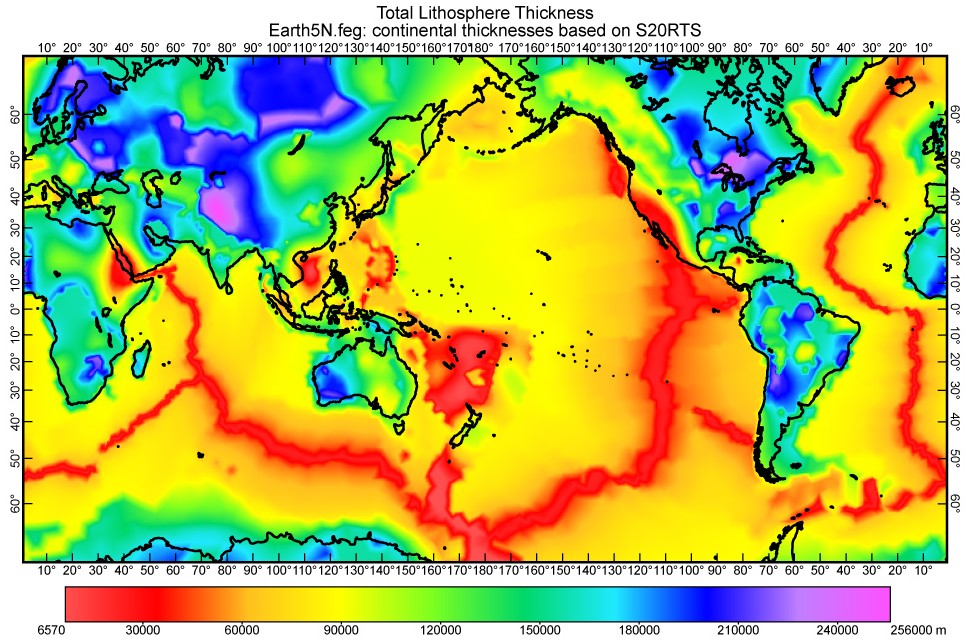 As soon as the magic lifting-and-integrity-maintaining field lifts off (if it never kicked in, the asteroid lands as a firestorm several tens of kilometers wide, scouring half the West US clean of life and probably triggering a nuclear winter), about two thirds of your average asteroid will crumble on the ground. But that's not enough, the asteroid doesn't spread on a wide enough surface. If it's "solid iron", scrap the two thirds - the asteroid will at most break in three or four pieces, tops.

We now have a mass of very dense material on the surface, and the crust cannot take the strain. The If the crust was thin enough you would get a puncture and a lava lake several kilometres across, as well as some really fierce earthquakes.

Unfortunately, the crust is not thin enough and doesn't fracture - yet. Rather, it starts bending and sinking in the middle - the process will take days or, hopefully, weeks, giving time to evacuate the whole West coast and Japan, New Zealand and the Philippines. Not nearly enough time of course; deaths number in the tens of thousands by relocation shock and accidents alone, and there will be several hopefully minor quakes. It's possible we'll have already lost Los Angeles at this point, but then again, maybe not. Yet.

After some time, the strain exceeds the crustal resistence. Fracture ensues, the asteroid is lost to the depths of the mantle, and an area several kilometers long rebounds. The magnitude of the event defies imagination - think the Toba Eruption, the Yellowstone disaster and a baker's dozen of Krakatoas packet together. It's not a remake of the Chicxulub Impact, not even by far, but that's precious small comfort. We'll still get the lava lake and nuclear winter, but not just yet.

The whiplash effect triggers the San Andreas fault in such a way that you can wave California goodbye, but that's still nothing - the crust at that point is probably several hundred meters below equilibrium. Ten meters are more than enough for a seven or eight Richter quake.

A slice of the Pacific Ocean is displaced by those several hundred meters, not instantly but in a matter of hours, and starts traveling towards Japan and the Chinese and Australian coasts at a speed of about 800 kilometer per hour (depends on water depth). People more than two miles off the coast will probably survive.

Upon arrival, shoaling brakes the wave to about 80-100 kmph, but it still strikes like the fist of Poseidon, and boy is Poseidon pissed off. We lose all the Pacific islands, so much of New Zealand and Philippines that it isn't funny, a good chunk of Japan (that actually depends), most cities on the Chinese coast. The quantity of water involved is at least one order of magnitude above that of a tsunami, because a chunk of the West Coast of the US has now lifted above equilibrium.

Several others tsunamis of more or less the same magnitude follow.

The asteroid will crash into earth. The asteroid isn't large enough to end life on earth but it's impact will still cause a large crater and earthquakes which would inevitably cause some damage to nearby properties, which could prompt a lawsuit.

Once the asteroid has hit the ground it would be so hot from entry that it would probably start sinking. This would also delay the mining of the asteroid as humans won't be able to mine it.

He could land the asteroid however he would get hammered by lawsuits for the damage caused by the impact and the earthquakes and the harvesting wouldn't be immediate due to heat and also the asteroid sinking into the ground.

Can't he simply move the object to orbit Earth, build a facility on the asteroid that mines the mineral and ship it to the ground in thermally shielded boxes? In this way he achieves:

2
How could an evil king start by himself his kingdom from ground-up using his recently conquered kingdom?
7
Keeping secret the power to create anything?
7
What's the scope of an Element Transmuter?
3
Is there a way to trap a super-being like Dr Manhattan?
5
Destructive Impact of a Skyscraper Sized Flying Titan?
6
How durable would a kaiju-sized human be?
3
What is the extent of inertia manipulation powers?
2
How can being like Superman travel the world with his normal partner and to get to destination in the shortest possible time?