This is part of my Alien Message series:

I recall a TV show featuring a discussion on the design of warning messages for deep time, the little cartoon had dots in each panel (●, ●●, ●●●) because if the read right-to-left they might think it depicts a place where skeletons can be brought back to life! However, this is not a satisfying answer to me, as the people might naturally count down a series of steps to a conclusion.

In Dragon’s Egg, the characters remark on the Earthling’s drawings, why are there chevrons on the pointer? It must be their way of drawing an arrow, they decided.

So, how can something like a flow diagram depict arrows indicating direction? The style of an arrow head and tail might be completely culture specific. My first thought was to label it with dots (●, ●●, ●●●) along the line, but that reminded me of the first problem I related.

How could you clearly depict directional arrows in an alien drawing?

Related: how to depict sequence in general, among a set of pages, diagrams, or figures? Even the “correct” orientation of the page is not known! (An answer to one can be used to solve the other.)

Context, examples and lots of repetition

There are some thought schools which think that past is ahead of you and not behind you, so (●●●, ●●, ●) would be "natural" ordering for them. The dots without any context, or arrow → do not mean much if you do not know context.

You have to clearly show how you think

You have to provide as many examples as you can think of. Time causality, describing known feats of universe by thought diagrams and so on.

I did read The Martian Chronicles by Ray Bradbury where this book deals on subject on how to understand Martians.

Also mind, that even "arrow" has to be explained, because you cannot even assume that arrow has meaning of "points to" in alien language.

Best idea is loads of repetition, where you in the message itself you hint the progression.

This is message X. You will receive this message exactly 5 times. Then other message will be received.

And then you can build on this.

As you say, there is no way for the aliens to know. Specially since they may not even know what our bodies look like.

I think what you may want to look at is how we managed to understand early writings and drawings.

Mostly, we tried for each piece to understand if there was a most probable order. "On this one there is a kid, then a teenager, then a young adult, then an elderly, then a corpse, this must be the right order". Yes, you may fall on a story about time reversal, but if you have enough material on diverse subjects (and preferably subjects understandable by any alien), you'll be good.

So, your marking will probably not help understand your document, it's the other way around.

If you count on your aliens to be smart, it is actually a good idea to put page numbers on it, as you'll teach them how you count at the same time.

Things to put on your pages to explain ordering

Remember, any kind of titles, subtitles, index and such will be invaluable. Metadata is the most reliable data.

Then you can use that as an established sequence to build more abstract symbols on.

Turn this on its head, and you realize that the concept of an "order" is not as vital as you might think. As long as the message is received by something which truly thinks, it isn't the world if there is a misinterpretation. In Dune: The Machine Crusade, there's a quote:

The weakness of thinking machines is that they actually believe all the information they receive, and react accordingly.

Non-machine thinkers are generally expected to take the information they receive with a grain of salt. The semantics of the message might not be perfectly cast in stone.

the little cartoon had dots in each panel (●, ●●, ●●●) because if the read right-to-left they might think it depicts a place where skeletons can be brought back to life!

This is only an issue if your reader is utterly confident in the order of the panels, ans as you pointed out, if the other species counts (●●●, ●●, ●), you're still in trouble. However, it is also reasonable to assume there will be some degree of uncertainty in the translation. Surely if there are two ways to interpret a symbol, and one of them is in violation of the forces of entropy, they'll think twice before blinding assuming they understand!

As it turns out, we don't even always agree on which way to put the arrow head. If I take UML as an example, the aggregation symbol and composition symbol actually has the head on the "from" side, while association has it on the "to" side: 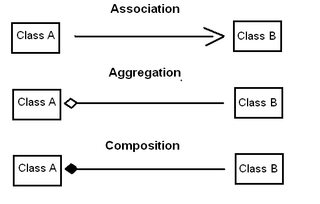 So what can we assume when we send our alien message? I think it is reasonable to assume that the end viewer of the message can recognize that these arrows are being used to describe a directed graph, but that they might misrepresent the direction. Mathematically speaking, they may interpret the graph as its complement graph.

One approach you could do is try to use some properties of these graphs. One interesting property: The complement of every triangle-free graph is a claw-free graph, although the reverse is not true. You can demonstrate what a triangle-free graph and a claw-free graph are pretty reasonably. You can then use those properties to break the symmetry between a graph and its compliment, and once that symmetry is broken, you can then use that to demonstrate a directed graph. You might show a 'triangle free' directed graph that is only triangle free if the direction of the arrows is correct.

Once we're comfortable with directed graphs, assigning meaning to the arrows becomes a semantic step, rather than syntactic step. For example, one might want to use an arrow to show "the direction of time's progression," which is from low entropy to high entropy. Or you might want to show arithmetic, in which case the arrows can be used to describe the Successor function in Peano arithmetic. No matter what, the key is that the question of which direction the arrow is pointing has been solved by using graph theory.

Of course, the best solution is to have messages which you don't mind being misinterpreted. For example, if you are worried the aliens are all serial killers, don't send your phone number and home address in the message! Instead, send something more ambiguous that can start a longer dialogue!

You may be able to depend on certain shared physical properties, such as the handedness of the nuclear weak force, or instructions to build a device that emits circularly polarized radiation, as referenced in this series of blogs:

The blogs explore how we would explain left and right to an alien on the phone, who might not have any common referents to our Earth biology.

Also, there are some computer science algorithms that are mathematical and presumably universal, such as directed acyclic graph (DAG) sorting that rely on concepts of direction and ordering to make any sense.

Then you can assign concepts to these shared directions (origin is on left, target is on right) to define your arrow and implication and entropy.

Basically send similar sequences (eg, 2 --> 4 --> 8 --> 16: for doubling numbers). Assuming your communicators have established the values of various numbers like integers or natural numbers, then by depicting a variety of sequences either increasing or decreasing will indicate the direction of those number sequences.

If you send messages containing sample sequences which only make logical sense if the "-->" represents a 'direction", then the recipients will be able to interpret the same symbol being used in other messages as a direction. For example, in a flow chart or a set of directions.

This is nothing more than applying the Anticryptography in a way that provides the recipients with what is a sensible to correctly interpret the directional symbol. Directional arrows don't need to be arrows. Any symbol will do, as long as it is unambiguous in terms of its function.

The OP asks for examples where the arrow symbol represents a direction. Send three pages. Each page has the arrow pointing to show which way the page should be up. One page has a complete image on it. While the other two pages have half of the image on each. When the two half images are combined together the right way up they will represent the whole image. This established the first step for indicating a direction.

This can be followed up by pages with number sequences arranged in columns. If the numbers increase down the page and there is an arrow alongside the number column, this should indicate the direction of numerical increase. Alongside this column there can be another column of numbers that increase starting at the bottom of the column but this time going upwards. There will an arrow alongside this column but now pointing upwards.

The basic concept is to first establish an arrow as an indicator of a logical direction in terms of number. The next step will be to establish that the same symbol can be used as a symbol that indicates both orientation and going from here to there.

This suggests starting with numbers, using images to give a sense of orientation, and this can be built up to provide a directional indicator.

The problem is nice, but how do I make sure that the alien is oriented correctly? The up arrow is only "up" if the page is held like "this." A piece of paper is horrible in this regards. A spaceship that has landed on "legs" with the nose pointing up might work. Unless you land in water where the intelligent fish are watching for predators from the ocean depths.Consequently, they swim upside down relative to what we would expect. Maybe they live in the atmosphere of a gas giant and there is no "up." Think "airfish." I think you must make some assumptions, otherwise the problem is not solvable. So, what are the minimal assumptions that you must have to make the problem solvable? They must have written language that uses symbols. They need to be roughly man sized. A few millimeters tall is just as bad as 10 meters tall. They must have eyes that process images. Ideally they should see color. Somehow one needs some point of common reference. Chemistry? There needs to be enough communication to gain understanding. How do you tell the difference between a warning message and a James Bond thriller? I am sending you a movie plot on how aliens destroyed Hong Kong, versus I am sending you instructions on how to destroy Hong Kong.

Not the answer you're looking for? Browse other questions tagged science-based aliens communication psychology or ask your own question.

192
How might modern humans leave a message for 50,000 years?
26
Recognizable natural numbers for alien message?
24
Is there a way to translate a language that includes words for things we don't know?
13
Alien message: “Invitation”
1
Optimal wavelength for an interstellar communication laser

5
Who will find out alien installment on Jupiter orbit?
4
How would two alien races decipher each others language?
12
The Alien perspective - generating alien POV characters via twists on human psychology
1
Humanoid Alien basking and ship shifts
10
What is the most efficient and safest way to communicate with an alien should first contact occur?
26
Recognizable natural numbers for alien message?
13
Alien message: “Invitation”
2
Adult-sized alien child and child-sized alien adult