I am trying to figure out the feasibility of using Anti Matter to bombard the surface of a planet from a position in space.

My gut feeling is that its not very feasible. Wouldnt the Anti Matter react with the upper atmosphere and explode up there instead of on the surface?

Could the Anti Matter be successfully contained in something to deliver itself to the surface so it could explode there? Or is dropping/firing such a container from space problematic as the container would heat up and vibrate whilst entering the atmosphere?

My guess is that if you were sufficiently advanced enough to have Anti Matter based weapons, they would only really be effective in space. Using these weapons on a planets surface or anywhere surrounded with matter would have the risk of the weapon going off too early, or even worse, taking you out.

Matter-antimatter annihilation yields all of the available resting energy of both the antimatter and the matter it's annihilating. This may be more than you expect. In fact it's at least 43 kilotons per gram. The kinetic energy of the impactor is nothing compared to that. Since your aliens are looking at weaponising this stuff then I'm going to guess they have the capacity to make and handle a lot of it.

So lets assume (for fun) that our aliens are throwing around munitions on the same order of size as a small naval shell, say 500 kg. Each kg is 43 Megatons. You've lobbed enough antimatter into the atmosphere to theoretically yield 21.5 GIGAtons. The Tsar Bomba, largest nuclear bomb ever detonated, was only 57 megatons (1.3 kg), and that had a mushroom cloud that reached above the stratosphere and an 8 kilometre wide fireball. Tsar Bomba's fireball was prevented from reaching the ground by the shockwave it produced (it essentially blew itself back into the sky), but that same shockwave entirely levelled a town 55 km from the blast zone and caused third degree burns at 100km.

So: Do you need containment?

Not really. If you can make enough of this to be viable for use in warfare then you can just aim for the planet and hit go.

As soon as the antimatter hits the atmosphere (which it will be doing really early on, even if the atmosphere is thin) it's basically going to turn into a rocket engine trying to power it's way back up to the stars by blasting all the normal matter below it out of the way. BUT! Unless you skim the shot off the atmosphere then it shouldn't be able to do that until it gets pretty far through the atmosphere. Most of the matter in the atmosphere is concentrated in a layer about 15-18km thick. Remember how big Tsar Bomba was? Even if your munition doesn't get anywhere near the ground it's still going to devastate it.

The advantage to antimatter weapons is that they'll keep exploding until they're completely consumed: Exploding high up in the atmosphere is still exploding: still creating a huge shockwave, and still creating huge problems for everyone below (like blinding people). Essentially you're going to have a Tsar Bomba going off continuously until all the antimatter is used up.

If it doesn't have sufficient time to turn itself around and leave the atmosphere before utterly fragmenting then it's just going to turn into a raging fireball, and it's likely that fragments of it will in fact be propelled downwards by air hitting the projectile from above (as air does have a bad habit of enveloping things), causing the 'explosion' to descend even closer to the ground.

And this is assuming that you didn't already give it enough power to hit the ground: If you've launched it downwards on a steep orbital re-entry path then it will be going fast enough that the outer layers of antimatter won't be able to create enough of a 'burn' to generate any meaningful thrust (due to the fact that it's annihilating it's reaction mass and blasting any further fuel away in an undirected fashion). It will, however, leave a wake of unprecedented destruction behind it on it's way to the ground, whereupon it's going to be surrounded on all sides by matter it can annihilate with.

Other answers have addressed that containment is possible. I'm just going to go out on a limb and say if you've got the ability to make any reasonable amount of antimatter then it really isn't necessary.

Of course it's plausible.

The only thing that's slightly more out there in the realm of science-fiction is where they got the antimatter.

As you know antimatter is identical to ordinary matter in every way except that the particles it is made of have an opposite charge. This means by manipulating magnetic/electric fields it can be effectively contained within a space surrounded by a vacuum because the antimatter particles get repelled to the center of the canister.

Now as you also know, so far we've only been able to successfully contain antimatter for a very short time (about 16 minutes). To be clear though this is not because longer containment is physically impossible, but rather because how to do so properly is a partially unsolved problem of engineering. Importantly we are working on this issue and many believe we are close to solving it. And honestly, if your people can somehow find or create significant quantities of antimatter (enough for a bomb) then they've already solved it.

So what do you do now that you've got some contained antimatter? Well, just launch it from orbit. The electromagnetic field will persist within the atmosphere but will certainly fail when what generates it gets destroyed on impact. When that happens all the antimatter is free to interact with normal matter and... boom. You get a very, very big explosion.

Antiprotons can be trapped in electromagnetic field. Since your bombs will be quite small, with the right materials, atmospheric entry of small shells will be possible. Find a way to trigger bombs when they hit the surface, and you will be done. That is easier than regular shells, once electromagnetic field is gone, antimatter will eat through the outer shell.

Based on your initial description, it sounds like you are sending "naked" antimatter" to the planet, and yes, it will interact in the upper atmosphere.

Of course, this isn't going to be much of a help to the people below, positrons will interact with electrons releasing gamma rays at a distinct 512 KEv energy (anyone outside the battle zone picking up the signature will have no doubt at all what just happened), while anti protons will interact with protons releasing a blast of high energy subatomic particles. As you can see in the diagram of a theoretical antimatter rocket, this stew of pions and other charged particles breaks down in time to other particles as well as releasing gamma radiation. 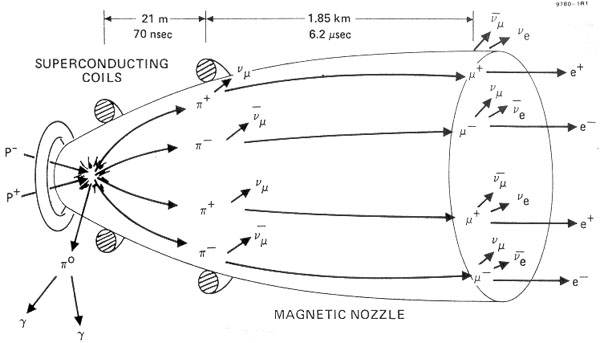 So the surface would be struck with a blaze of high energy radiation, followed shortly by the shockwave created by the atmosphere heating by the radiation release.

This would also affect everyone in space, since the radiation release would be spherical. Satellites and spacecraft in orbit would be irradiated by the high energy gamma rays and particles as well, which might even put the launching spacecraft in danger.

The best way to overcome these issues would be to enclose the antimatter in a containment trap which is programmed or designed to disintegrate at low altitude or on the ground, putting the energy right on the target where you want it to go.

As you have already commented the most effective way would be the ion trap. The two most common types of ion trap are the Penning trap and the Paul trap. A possible alternative could be the use of Optical tweezers, but this method can not contain the antimatter for a long time.

It depends what you want your bombardment to accomplish.

Can you technobabble up an explanation for delivering antimatter from space to a planet's surface? Sure, that's just Star Trek's photon torpedoes. It's likely to be very unpleasant for any inhabitants. and will scar up the surface.

Can you fire raw antimatter directly at the planet? Sure. It will react with the atmosphere in spectacular ways, and the fallout will be unpleasant for any inhabitants, but the surface may not be strongly affected (depends how much antimatter you use).

Can you fire raw antimatter at relativistic speeds so it makes it down to the surface? Sure, probably. You must really hate those guys. I don't even know how to estimate what that might do, but it will be unpleasant for any inhabitants and probably scar up the surface (depending how relativistic the speeds are).

Can you use your antimatter in an engine to just drop rocks on the surface? Sure, anything massive enough to survive reentry has some nasty bombardment characteristics (Heinlein overestimated, but Pournelle didn't). Following the theme, it will be unpleasant for any inhabitants, and probably scar up the surface.

In general though, you aren't going to achieve any non-exterminatory objective with antimatter. Figure out what you're trying to do, and do that instead of focusing on the loudest toys.

The major problem with an anti-matter kinetic energy weapon is that it will act exactly like a meteor. You surely have seen the wonderful sights we have when we get meteor showers like the Leonids?

One possibility is that the spaceship and crew are matter and the planet is anti-matter. Nobody thought to check that possibility, so you get disastrous gamma radiation affecting both the planet and spaceship.

Sending down an exploratory vessel, perhaps with a diplomat or two, and having it disintegrate in the atmosphere of an anti-matter (to them) planet is not the best way to start diplomatic negotiations. The planet may think it was a weapon. The spaceship knows it was an accident but has no way to prove it. Voila! Instant interstellar war. Any linguistic team would probably include scientists -- physicists, chemists, mathematicians, and other natural sciences -- since that would be the easiest way to establish common words. The properties of carbon and oxygen don't change from one world to another. But if the best diplomats and scientists you have with you have just been killed in this matter-anti-matter, you have a major problem.

Not the answer you're looking for? Browse other questions tagged science-based warfare space antimatter .

30
Feasibility of anti-matter as a fuel
2
Would Building a Waypoint/Colony station in Slip Space be Logical?
3
Sections of the universe made of anti matter
6
How can I make an anti-matter "rod" warhead for interplanetary delivery?
8
Anti-matter containment
6
An anti matter planet behaving like a star
3
How can I destroy a planet with antimatter?
6
Could anti-matter virtual particles be theoretically harvested from the quantum flux?
7
Orbital Bombardment of Airships
7
Can Advanced Matter-based Weapons Target Fast-moving Targets Deep in the Atmosphere Without Collateral Damage?