How would a planetary ring react to a magnetic field?

So for the story I'm writing, I'm designing is a gas dwarf with a very strong magnetic field and a planetary ring with a slightly inclined orbit. However, the rocks within the ring are very sensitive to magnetic fields. How would this affect the shape of the ring, if it is able to form at all?

They would probably be ferromagnetic, since the rocks need to have a strong, permanent magnetic field. As for more details about the planet, I did make another post about it here; the rings are made up of the same moon that created the planet's "Aether" surface.

This has indeed been investigated. I found a thesis by Daniel Jontof-Hutter (2012) that did a stability analysis of particles in rings orbiting, among other bodies, Saturn. One important quantity he studied was the ratio of electric force to gravity, $L_*$. When $L_*\gg1$, the electric force dominated (the "Lorentz regime"), while when $L_*\ll1$, the gravitational force dominated. The exact value of $L_*$ determines whether the rings will be stable or not; the presence of the electromagnetic field can lead to instabilities. There's not an analytical stability condition, unfortunately, so we have to look at numerical simulations to answer your question in full. 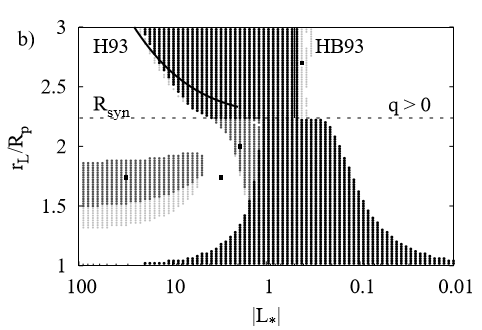 The darker the dots, the more unstable the configuration. Here's an annotated version of the diagram: 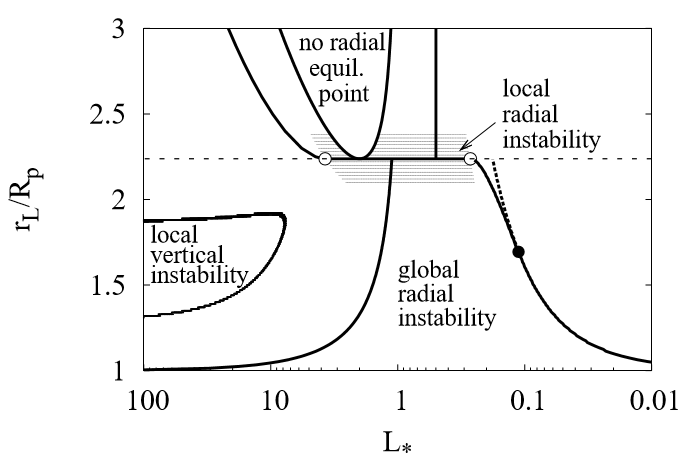 $R_{\text{syn}}$ is the radius at which an orbit is synchronous with the planet's rotation. Essentially, at small $L_*$, the rings should be stable at almost all radii. In regimes where $0.5<L_*<10$, there are fewer stable regions, and you can't have large stable rings. This does become less of a problem with large $L_*$, but there are still instabilities, more than for $L_*\ll1$.

The magnetic field is likely not going to be uniform in the space orbited by the ring particles. This means that any variation of the magnetic field will result in an induced current into the particle.

A flowing current means, by Ohm effect, an increase of the temperature of the particle that, being in very low pressure, will result in an increased evaporation rate.

In both cases the rings system is not going to last for long.

Not the answer you're looking for? Browse other questions tagged planets space orbital-mechanics magnetism planetary-rings .

8
Can this unique planet be colonized?
5
Could this uniquely shaped planet exist?
2
Can adding mass to a ringed planet cause a huge chain reaction?

8
Can this unique planet be colonized?
1
How to naturally maintain a Earth-sized Planetary Ring System and the possible periodic bombardment that can ensue?
4
Could plant life evolve on a world with a toroidal magnetic field?
26
What would be the side effects of a massive, strong magnetic field?
9
How could a technological society exploit an absurdly strong, permanent magnetic field?
9
How do I give my planet a stronger magnetic field? Playing with variables
4
How would the strong magnetic field of a white dwarf affect humans inhabiting a planet that orbits such a star?
6
How would a torus planet's magnetic field work?
3
What (if anything) can cause a substantial and stable shift of the magnetic poles of a habitable planet away from its geographical ones?
8
Habitability of a Low Axial Tilt Planet with a Planetary Ring