How would you modify a one-handed projectile weapon (preferably a crossbow) to make it trail a long, light string?

Technology Level: Similar to the mid 1800's, but without the discovery of gunpowder or development of modern firearms.

Physics: I'm trying to keep the basic physics of this world as similar to reality as possible, although "magic" will provide a bit of wiggle room here. I'm okay with it not being hyper-realistic, as long as your average college-educated non-expert wouldn't find it ludicrous.

Some Background Info (why I need this):

In this world, certain supernatural abilities are touch-conductive, meaning that they follow rules similar to electrical circuits. Like in electricity, certain materials are more or less conductive to magic.

One guy has figured out that a good way to use his healing abilities over a distance is to just shoot his accomplice with a sharp non-lethal projectile that trails a superconducting string. (Sure, his friend will probably be a little annoyed at first that he has a bolt in his ass, but probably less annoyed after he realizes his internal bleeding is gone.)

The problem is that I'm struggling a bit to understand how crossbows work, and mainly how bolts differ aerodynamically from arrows. I've found that conventional archers can attach string trackers to their arrows, sacrificing some degree of accuracy. However I'm having trouble finding an analogous setup for a crossbow. Is this because the bolt is so much smaller/shorter range than an arrow?

I think that the ideal weapon would have as many of the following characteristics as possible:

I'm also a little concerned about the projectile itself--namely, how to make sure you don't immediately kill the guy you're trying to heal. At first I thought of putting a stopping mechanism** on it to keep it from going all the way in. However, when I started drawing a diagram to include such a feature, I realized it would probably not work from an aerodynamic point of view. 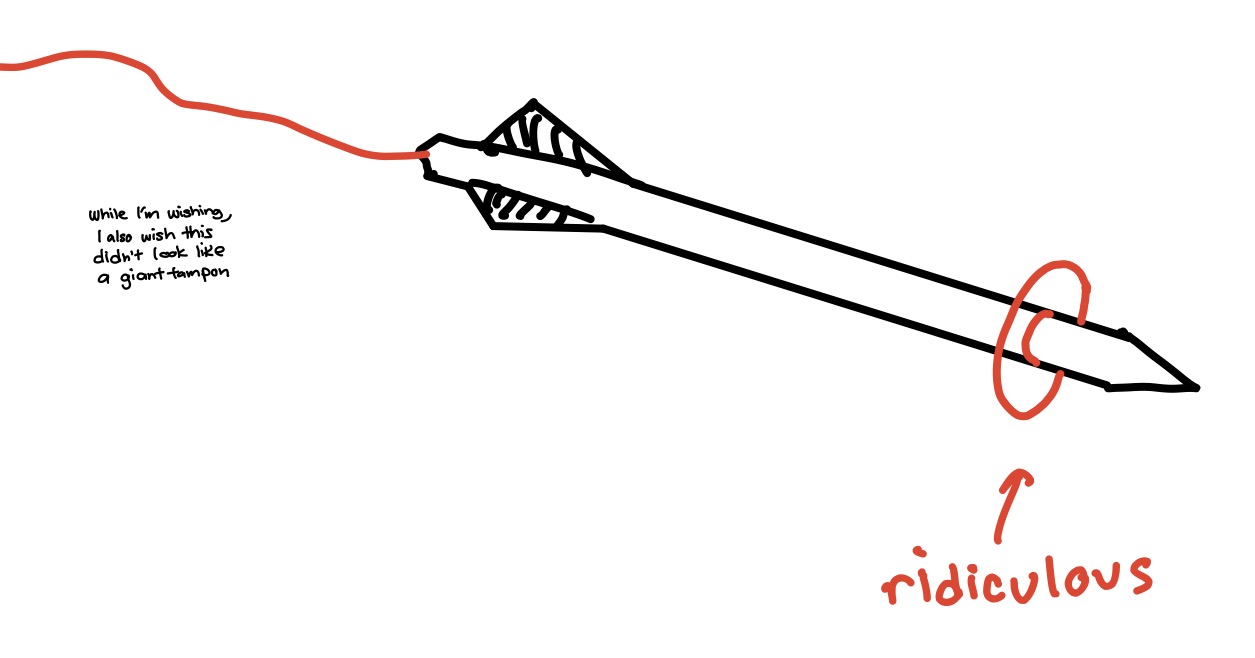 Instead, could I just make it too short and too light to pierce anything vital? (Hitting someone's eye or even their artery is probably ok.) If not, I guess that's just a risk he's going to have to take!

Thanks for all your help! I have the feeling that the answers are out there somewhere but I'm just missing the vocabulary needed to find them.

*You might wonder why he doesn't just use magic alone to propel his projectile and skip the weapon. As it turns out, this kind of magic is a bit too clumsy and inaccurate to pull this off reliably. It's good at providing strong directional power in certain cases, but the experience would be a bit like trying to shoot an arrow by hitting it with a car.

**What's the word for this?

You should check out some of the tools used by aborists to launch lines,, some of these definitely seem capable of launching a fair distance. Some links:

Someone using a crossbow, seems to get a large distance, looks like more than 15 yards. https://m.youtube.com/watch?v=qz8jG1p63NA

This guy using a throwbag: https://m.youtube.com/watch?v=7v9f6isVx3E Some people on this: http://www.arboristsite.com/community/threads/best-size-for-throw-weight.33808/ have thrown these about 30 yards nearly straight up ,and I assume this distance would be similar if not greater horizontally , but I don't know about accuracy.

This person using a small slingshot. https://treefool.com/2014/04/07/diy-cheap-throw-line-slingshot-vid/ If you're not averse to using one of these(they are twohanded), but very small.

You could investigate something with an atlatl.

I don't suppose a flying disk or boomerang would work.

To be honest however, I think you'd be best off with a crossbow, readers would already be familiar with it and I think the danger of your main character misplacing a shot and injuring his friend would add tension and this would be exciting. To stop his friend from being hurt, maybe said friend could wear some leather armour/a helmet?

As far as the stringy thing goes, you can have the missile have a hollow in the tail with several yards of fine thread coiled in. This minimizes the drag on the missile as well as the friction on the thread. The thread can then be attached to a ring or carabiner on the crossbow, allowing for easy detachment.

Attaching wires to flying weapons is doable, and if the distance involved is less than a hundred yards, there should be no accuracy problems even with your average crossbow:

You can use a bamboo or cane for the shaft, and coil the wire inside.

The nonpenetrating requirement can also be solved in a way, but requires careful construction.

When the arrow hits, the forces in play are the resistance of the victim's flesh and the kinetic energy of the incoming shaft. The part of the shaft that penetrates has very low speed and exerts a backward force on the incoming shaft.

once the first segment ### has entered the target for about half its length, the backward force is enough to break the arrow at >>< - the left part of the shaft will shatter and splinter, and hopefully it won't inflict too much damage. Or it could drive into the right part which is partly inside the body, enlarging it and making its further penetration impossible:

You can do this by having a solid left-part of the shaft, and a right part made up of several splinters welded together to the right, and held together all around the left shaft by the equivalent of a breakable elastic band that's just enough to hold under the stress of departure from the crossbow. When it hits, the right part penetrates and slows down, the middle part collapses and acts as a shock absorber, and in so doing it pancakes increasing in width, so that further penetration is avoided.

All this must not split the thread connected to the rightmost conductive head, of course.

One other option, probably simpler, is to have a point made of soft wax, with a needle inside. The wax is shaped aerodynamically, and on impact the blunt body of the arrow doesn't penetrate (it might well leave a nasty bruise), the needle does (up to a controlled depth). The wax point can be quite large and offer aerodynamic penetration to a large "shoe" to ensure lack of penetration:

The biggest problem here is the definition of "non-lethal" in an age before proper medicine. Any wound is potentially lethal, maybe not immediately, but in the long term. You're dealing with a magical healing here so there's more flexibility, but you're still doing a lot of damage on the way. The chances are your victory here is pyrrhic and you're going to have to get some hands on healing in short order to deal with that puncture wound.

Then there's the range consideration. Any projectile weapon with intent to puncture is going to have a set of ranges: lethal, possibly non-lethal, and useless. The last thing you want to do is punch a hole clean through him because he's a bit too close.

The gunpowder question: Without gunpowder combatants would still be armoured. This is a problem. To penetrate armour the power on such a device would be lethal to an unarmoured target until close to the normal useless range. Again, get your range and armour balance wrong and you're punching a hole straight through him.

In the 1970s or 80s I read an article claiming that until recently crossbows were very inaccurate. This was in a discussion of siege warfare & castle defense. I now doubt that information, since compound xbows have been around for many thousands of years. Currently, xbows are as accurate as pistols at modest (30-40 yard) ranges. Scopes are necessary. There is no, I repeat, no safe way to shoot a xbow at someone. You risk maiming or killing them. As you seem to know, bows are used to hunt both fish and birds with strings attached see, for example Wikipedia Bowfishing. I'd guess the accuracy of such projectiles is miserable at any distance more than a few yards. Increasing muzzle velocity (or whatever it's called for a bolt) should increase distance, but will also reduce accuracy while at the same time making injury more likely. Tasers have maximum range of 35 ft and use compressed gas. Serious injuries are rare...at least, so says the law enforcement agencies that use them. Last idea, have you considered a stream of water? I guess getting a continuous 30 ft stream is unlikely...

A crossbow imparts the same momentum no matter what. You cannot pull your punch based on range.

So unless you change these to Nerf style suction cup darts, you have a high risk of punching into / through your target. For a healing bolt, you're going to have to heal the bolt-strike and whatever you intended to heal at the same time.

With a standard bow, you can reduce the force for close-up vs long range shots. And that's a plus. But you still have a high risk here.

You might try to make a thing more like real-world taser systems that use tiny barbs and wires. Those are small enough to be non-lethal.

Anything functional at long range that can carry a line could actually be lethal. Is it really necessary to actually hit the person or just land it near enough that they can grab it? I wouldn't aim a crossbow at a friend, especially if I am going to have to heal them.

If you want a non-lethal projectile think of something like a yo-yo or a blowgun. However, the range may be much shorter than you would like. However, one should consider whether a healer is really also likely to be a master marksman at long range. Also, if your healer is at an extreme distance from his allies doesn't that make him a prime target in many cases? A shorter range weapon may be appropriate since he would still be able to heal from cover or hiding. However, he would still need to be pretty close.

Not the answer you're looking for? Browse other questions tagged magic physics weapons .

3
What choice of magic arrows would be most useful against modern military
56
Designing Hacking Arrows
39
How to realistically create a bow that's also two one-handed swords?
1
How to make a slow but powerful futuristic bow and arrow
8
Is it realistic or possible to implement the loading mechanism of a shotgun into a crossbow?
6
Crossbow that fires ice-bolts? Seeing as Ice Bullets are impractical and don't work, would firing Ice Bolts work instead?
4
What would be the strongest "realistic" bow draw weight with ubertech?
17
What would be the best melee weapon(s) to emphasize arboreal mobility?
8
Designing a Oil-Firing Crossbow-Like Weapon