Where do you put a photosynthetic Dyson sphere?

One of the answers to What could make a star green? describes a living Dyson sphere made of photosynthetic, plant-like material.

What type of star or star system is ideal for a plant-like Dyson sphere?

Keeping in mind access to nutrients and a healthy dose of radiation...

So again, keeping in mind photosynthesis-friendly levels of radiation that won't immediately fry cells - as well as an abundance of material - what is the best system in which to place a photosynthetic Dyson sphere?
*Photosynthesis does not necessarily need to use chlorophyll if that matter

EDIT: If not clear before, I'm looking for a natural system that doesn't have to be edited manually first.

Considering the technological level needed for a society to being able to go through with such a massive project, the location will likely be secondary.

You can literally just choose any system you come across that contains one or more planets with (primitive) plant-life1 capable of photosynthesis. The more evolved the plant-life on said planet, the more likely it is that radiation doses and other factors are favourable for whatever you want to live there.

Then your society starts the monumental project of taking apart all the bodies in this system (and likely neighbouring ones) to gather enough material to build a perfect sphere with a radius of roughly the distance of the planet that managed to create life by itself - and voila, you've got a new home or zoo2.

And before you know it you've created a tremendous structure somewhere in a corner of the galaxy, silently hiding away giving out no emissions and thus being dark to mostly any form of sensors.

1Doesn't necessarily have to be a plant, but writing plant makes understanding easier
2Or whatever it is that this species/society was looking to achieve by building that thing

If it's an artificial construct/creature you build/place it around a Red Dwarf, always; Red Dwarves live long, long, reasonably untroubled lives, if you are making the effort to build any of the system spanning mega-structures you're in it for the exceedingly long haul. You can probably find Red Dwarf systems with suitable debris halos in the inner system that you can exploit for the resources to grow the sphere but probably the ideal is to get in on the ground floor and put it up around a proto-stellar cloud that's about to become a Red Dwarf. If you do that the sphere captures all the debris blown out of the inner system when the star initially lights up, and in fact most of the proto-planetary material that's around during the heavy bombardment phase when planets would otherwise coalesce as well because anything that crosses the goldilocks line for the finished sphere will be intercepted.

I am assuming that anyone who can engineer a Dyson Sphere Plant can do so in such a way that it's life cycle is compatible with the star it's being matched with such that it can feed on the infrared of the proto-stellar disc during it's initial growth phase and the visible light of the star once it matures. Finding a good cloud should be easy enough since it's purely a matter of total mass.

If you can build a Dyson Sphere, you can build your own plantlife. All that's required is to drag enough resources to the site and build the Sphere. Rather than try and scoop this up from a Sun, I think you would be launching asteroids and entire planets to that sun for the materials needed, then build your Dyson Sphere! Just make sure you are done before the goldilocks zone changes because the sun goes into another state...

If you want something that would have a chance to naturally develop, start with a proto system.

At the right distance from the star, a plant like entity forms (or is seeded). It is sticky enough to gather grains of dust (or it starts out on a pebble sized chunk). Since it uses photosynthesis, surface area is important. So accumulated grains of dust will be transported to the edges of the plant (I'll just call it a plant and let a xenobiologist quibble about it's name). If pieces break off, they will likely remain in roughly the same orbit but will spread out to form a ring. Also, the plant would spread more in line with the orbit because growth in that direction is more stable; again promoting a ring. As it gets bigger, it forms its own gravity well, drawing in more dust.

Once a ring is formed, it can no longer grow along the line of its orbit and can only spread out forming a spherical shape.

The main problem is that the the sphere will have a hard time remaining solid. The forces are a lot less in the orbital plane. You may end up with rings moving at different speeds or with something like Dyson's "cluster sphere" where multiple round plants are all orbiting the star at roughly the same radius but on different orbital planes. If you have enough of these plants, it would appear solid from a distance.

The plants, once formed into disks wouldn't have to remain in orbit at all. They could use their surface area and mass to balance the push of the solar wind with the pull of gravity. In this scenario, solar CMEs may push plants out of orbit where they will become seeds waiting to find another star.

In any case, a nova will blow these plants all over the place and seed the nebula with seeds. Newly formed stars in that nebula may form with their sphere seeds already present.

If it's a naturally occurring Dyson sphere, best bet might be a super early solar system. Your biggest constraint here isn't light or radiation (problems that can be exobiology-ed away), but nutrient inputs: even the most alien plants we can dream up need some physical matter to build with in order to be plausible. For earth plants, that mostly means carbon and nitrogen [EDIT: oh yeah and water lol], but also lots of other essential macro and micro nutrients. So you need lots of matter but it can't be locked up in planets, because that would be of no use to your space-bound plant sphere.

What you need is some space dust: 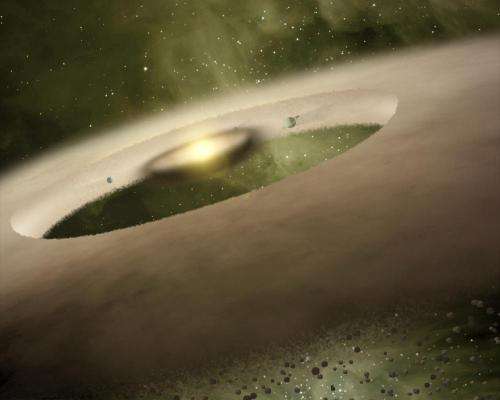 The organism that created the sphere either evolved very early on in the history of this solar system, or it's a visitor from elsewhere. Before planets had time to form, this organism colonized the clouds of tiny asteroids that orbited this sun, linking the dust together with intricate root/vine networks. Millions of years later, when a typical solar system might have formed planets, the constant growth and activity of these plant-like organisms have kept the majority of matter in the inner rings of this system in a continual state of erosion. Plants are historically very good at defying gravity, after all.

I don't think this would form a complete sphere - more likely a thick ring (see image of space dust). Still could be pretty cool beans. Perhaps surprisingly, the formation of the planets in our solar system (millions of years) was a relatively quick event compared to the evolution of our world's current biodiversity (billions of years). So you have a lot of leeway in deciding how diverse you want this world to be: is it mostly a monoculture of that very first alien organism to enter the system, or is this a vast ring-world jungle with diverse animal life?

Not the answer you're looking for? Browse other questions tagged reality-check biology solar-system dyson-spheres or ask your own question.

96
What could make a star green?
23
What to do with all the heat in a Dyson Sphere?