I'm writing a story in the genre of Heroes, The 4400 etc in which a group of apparently random civilians, mostly US citizens, are subjected to some alien influence and gain strange powers, whereupon the government wants to keep an eye on them and run tests to find out exactly what they can do. The DHS has stepped in and invited several of them to come to a facility where tests can be run (probably experts from the NIH will be invited in for this), and where one of the characters who needs unusual medical assistance can receive it.

I'm looking for an actual location, based on the following criteria:

What would be a suitable location?

This site has been used historically to research and experiment with biological weapons - something relevant to human with superpowers, "weapons" in their own right. It's known for having engineered some pretty nasty viruses, and has not avoided controversy.

The facility, while not completely secretive, does have reason to withhold information from the public in the interest of safety. This could be used to conduct medical research on your characters. It's still in use today - this time as to research defense against such weapons.

Does the location matter?

If the facility is secretive - so much so that foreign governments can't hear about it - the characters will likely not be told where they are / are going. Locations with this much secrecy probably aren't on any lists you'll find online, but they likely do exist. It's most realistic to withhold this information.

What more could you ask for? 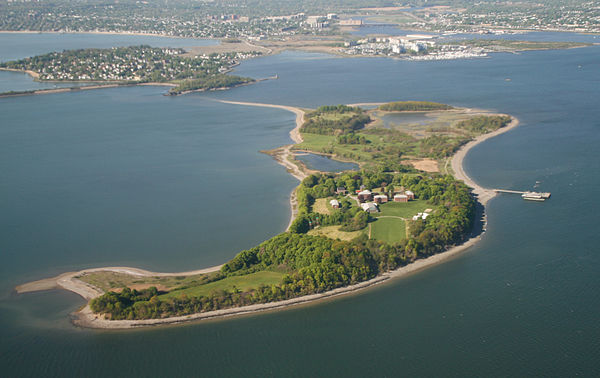 It is a mile from Boston. It is a private island on which one can have events like weddings, teambuilding exercises etc. If you rented the facility for your "team building exercise" no-one would think twice.

It might be tricky to get rid of the staff but if you paid well and said that it had to do with corporate secrets I bet they would go along.

If you want less developed than the Outward Bound facility on Thompson island because your super might Hulk out and wreck stuff, or if you worry that people in town will notice your super turning into a 100 foot dragon, there are other islands in Boston harbor that would do and that are less visible from town. I see on the Spectacle Island website "The Spectacle Island Marina is temporarily closed until the end of July for ongoing repair of winter storm damage. Sorry for any inconvenience. " Hmmm...

While not within "commuting" distance, Virginia is honeycombed with bunkers and storage spaces built during the Cold War to house US government functionaries, records and equipment to be ferried out in the event of an impending attack on Washington DC.

While the idea that thousands of people, Federal records and equipment could be ferried out and safely sheltered in the 30 minutes between the detection of ICBM launch and impact is perhaps a bit optimistic, the fact remains that there are many hardened bunkers already present.

The ones which were built for government functionaries would likely have fairly pleasant interior facilities, although the ever present life support machinery (HVAC, water pipes, storage lockers, access tunnels, emergency generators and maintenance spaces) would give you the strange sense of walking down the hall and being inside an aircraft carrier.

So long as the people are being ferried in and out in blacked out vans, "black helicopters" or other means where they are unable to see the route they are taking, time the trip or record the GPS coordinates, then the government can still maintain secrecy and security of the facility.

Not the answer you're looking for? Browse other questions tagged government super-powers united-states or ask your own question.

30
Developing a government that can hide an immortal ruler (and their secret to immortality)
7
Keeping secret the power to create anything?
2
Jurisdiction over strange events in the continental US
3
A world government in the 1400's
6
How would people in the 1920s-1930s explain or rationalize superpowers?
4
Why get rid of the world government?