How could a submarine-like vehicle steer and propel itself in a superfluid?

In a large body of liquid helium below the lambda point, what would be the best way(s) for submarine like vehicles to achieve acceleration and directional control?

I'm willing to accept an answer that invokes a way round the problem, such as intentionally heating helium over the lambda point, as long as it is reasonably justified as a practical solution.

Superfluid liquids aren't any more compressible than other liquids. So you can use peristaltic pumps to move it around. For instance, from the front of you to the back of you. Much like a propeller or jet.

A single pump will produce thrust in discrete packets, but having an array of them can provide smooth sailing. Point them in whichever direction you need to thrust away from, like maneuvering jets on a spaceship, and you're in business.

You can also use heating elements like NASA, but they just don't purr the same.

A propeller will still function, just without frictional losses.

Turning the propeller means the fluid mass must be accelerated backwards, pushing the blade forwards. Zero viscosity does not mean zero mass.

Propellers better in water than molasses because water has much lower frictional (and power-draining) losses. They don't work as well in air because of the much lower air density, but prop. planes prove they work well in a fluid with quite low viscosity one you speed them up to compensate for the low mass of air.

The nature of the flow within the wind-tunnel is indicated by the propeller which consists of two thin mica vanes ... passage goes on the explain how these applies specifically in the case of superfluids. It also notes that this effect depends up turbulence (so that the disturbed flow does not re-impact the back side of the black to make a net momentum transfer of 0 -- In fact, if slow enough, the net-thrust would be zero, i.e., once you reach the laminar flow region)

They also include a graph of experimental results the plots the net thrust against velocity.

For a less technical proof that propeller would work, how about a picture of a helium pump. Notice the use of an Impeller to push the helium. 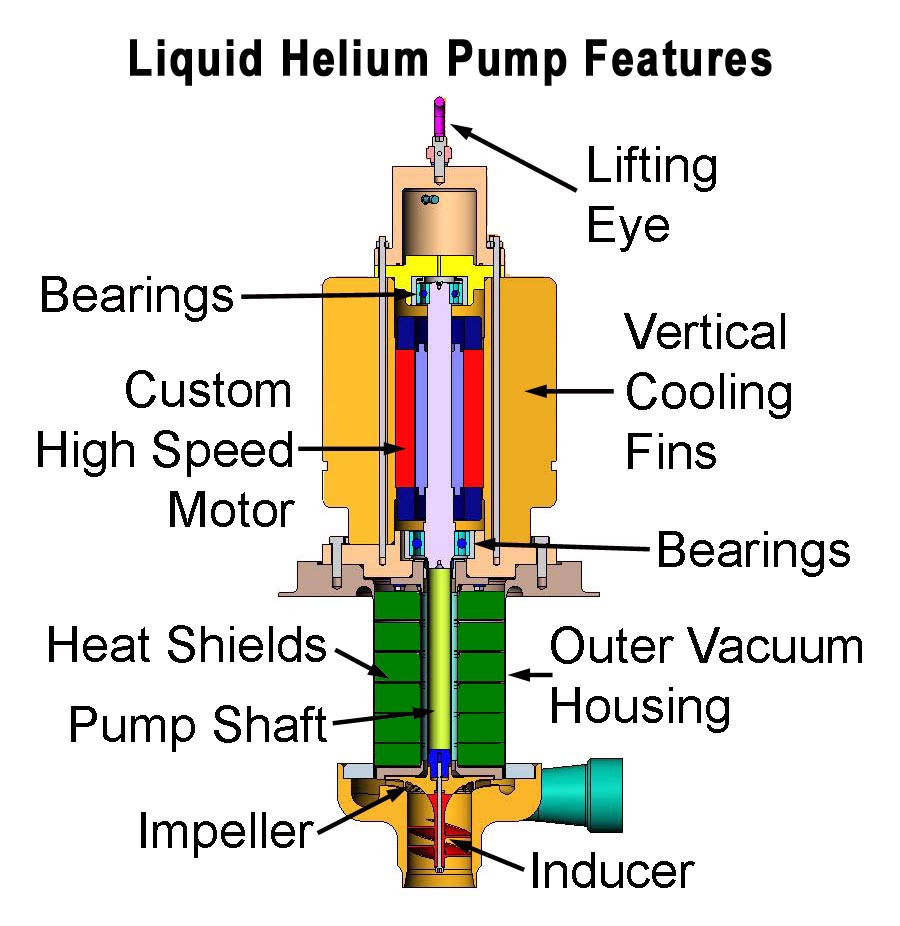 The vehicle could carry reaction mass to be ejected, and thereby navigate by Newton's Third.

I've really appreciated all the answers on this, There has been lots of excellent discussion, I'll be answering by drawing from my two favorites, peristaltic pumps, and heating helium to a gaseous state and exhausting it to generate thrust.

I will try and produce some maths for this. Where I am able I'll provide general case formulae for anyone who wants to use this idea. If commenters can produce or correct any of my formulae I will update accordingly. With that preamble over, I'll begin.

Peristaltic pumps supply fluid to a chamber with a central helium fusion core and a series of metal meshes.

The helium is directed out of this chamber via multiple directional nozzles.

To travel at significantly higher speeds, the mesh is heated via direct heating from a helium fusion core within the chamber and a surge of electrical current, bringing the helium (violently) to it's vaporization point.

(That source is cool, check it out)

Calculations of efficiency and thrust for both modes will be supplied in the main body of this answer.

Assumptions for my simple model

I was not able to locate a resource providing the efficiency of peristaltic pumps for liquid helium. However I am willing to make the assumption that they are very efficient, losing negligible heat to the helium. This is implied without any figures given here. [2]

I am going to be lazy and provide 90% efficiency. Given operation in a practically friction less environment, we will assume that acceleration characteristics for a general case are $$a = \frac{0.9p}{m V}$$ Where:

Because these figure may vary vastly depending on how much you want to wave your arms and say space-future-materials I have left the figures up to the reader. The primary point is that the efficiency is very high.

Assuming the material can be passed through a very narrow aperture due to being a superfluid, we can impart a fairly high velocity to it.

Thats pretty bad for a $40\, \mathrm{Kg}$ motor. Even exploiting that our fluid is 0 viscosity.

(If my calculations or sources are wrong here, please let me know)

But before we do that, let's figure out what we are going to loose in efficiency, what our power draw is, and what kind of acceleration we might expect.

I didn't bother with hull or equipment weights earlier, because it was quite clear that performance was going to be lackluster no matter which way you cut it.

Let's apportion ourselves one (metric) ton to work with and divide it among hull, pumps, heating, power and control systems. Just to give us some figures to work with, your mileage may vary and I in no way take responsibility for anyone who's submarine collapses at depth in a helium lake.

With my remaining $800\, \mathrm{kg}$, I will put $300\, \mathrm{Kg}$ into a super duper all the power you can eat space tech triple alpha helium reactor (I mean we have a lot of helium so why not use it), especially as this produces carbon, that's right, any excuse for a sooty exhaust. [4]

with that done, we'll add a $50\, \mathrm{kg}$ AI to control it because we aren't so irresponsible as to put organics on this deathtrap.

the final $50\, \mathrm{Kg}$ will be our heat dispersal and heating element.

Whilst most of that was frivolous the important factor is this, we have $0.5\, \mathrm{Kg}$ of helium per second to convert into gas and into energy. (To go slower in this mode we would lower the speed of the pumps, reducing our fuel.)

The reactions for this type of fusion are as follows (Wikipedia verbatim quote):

As a side effect of the process, some carbon nuclei fuse with additional helium to produce a stable isotope of oxygen and energy:

Unfortunately it's not clear to me what quantity becomes oxygen, regardless it might be different for the case of this implausible wave-your-arms-and-hope-tech reactor.

In terms of joules,making a blind assumption of $10\%$ of carbon molecules becoming oxygen molecules, then:

The molecular weight of helium is $4.0026$ [0] so roughly speaking one gram of helium contains Avogadros constant/4

Next we need to figure out how much heat it's going to take to vaporize our helium. I suspect if my calculations are correct we can probably manage a plasma without breaking a sweat.

With those orders of magnitude, we have the breathing room to pick a temperature for our exhaust gas to fit our liking. let us say we want to exhaust helium at room temperature to make for slightly easier calculations.

We have room as previously discussed to produce a near arbitrary output heat.

Plugging this new value into the thrust equation we get:

Still fairly low. Some optimisations required. Who knew jet powered superfluid submarines could be so sedate.

Since this figure is appalling I propose that as nice as the idea of peristaltic pumps and jets is, anybody sensible will heat up the fluid to a non super-fluid temperature, or perhaps if really wise, won't venture into a lake of liquid helium at all.

I'm really sorry I rained so thoroughly on the parade of peristaltic pumps and jets, I didn't set out to the maths just worked out that way. They were a great starting point and key to this answer.

I'm sorry this answer is currently a shambles at the end, it took a long time to write and unfortunately rocket science is where my understanding of physics wears thin.

(yes I added this one later and couldn't be bothered to renumber, I was 3 hours in dammnit)

You wouldn't be able to use propeller or any kind of wheel in superfluid - but you still can use jets. The problem would be how to suck up the liquid in and then expel it in desired direction, but as long as you able to implement leakproof valves, it's not going to be a real problem.

P.P.S. In the reference shared by Gary Walker, propeller experiment was working with the speeds far lower that theoretically predicted (generating thrust at speeds as low as 6 mm/s). This fact was reflected in the paper, however, scientific explanation to this phenomenon is still pending, as I understand.

6
What hull materials are suitable for a helium-sea jet-ski?

10
How would an earth-like planet with a habitable moon work and how to get there?
0
How does a spacecraft attempt an intercept course with a hostile one realistically (Part I)?
18
Runaway Starship Ramps
24
Could a person scuba diving take off his air tank and use it to propel himself?
2
Could a species develop the tech necessary to land on their own moon without comprehending light?
103
Would planets be cubic in my “cuboverse”?
9
Extreme adaptation: evolutionary narrative for Vantablack-like skin pigment
9
Would this “self driving” car work?