Considerations for a Dwarven Volcano City

Related: Could a Dwarven Civilization Exist?

Background: A Dungeons and Dragons world (for all intents and purposes, Tolkein lore is close enough) in which a group of colonists far from home are building a new city. The Dwarves find a volcano and see it as an opportunity to build a city to rival their homeland. They are currently 25 strong, plus 50 colonists of other races (elves, gnomes & humans), with hundreds more on the way. They have only a handful of mages.

Note that I know that this is realistically a horrible idea and everyone would die on day 1, but this is fantasy, so I'd like to be as believable as possible with my handwaving.

Benefits of this plan:

What are the possible solutions for the obvious hurdles presented by living in an active volcano? What are the potential benefits? Are there prominent examples from high fantasy media to draw inspiration from?

Edit: Regarding volcano type, it is a shield volcano that is part of a larger, non volcanic mountain chain mostly inspired by the Rockies. It is inland, about 50km from the ocean coast. It is an active volcano, that erupted a few weeks prior to the colonists arriving. 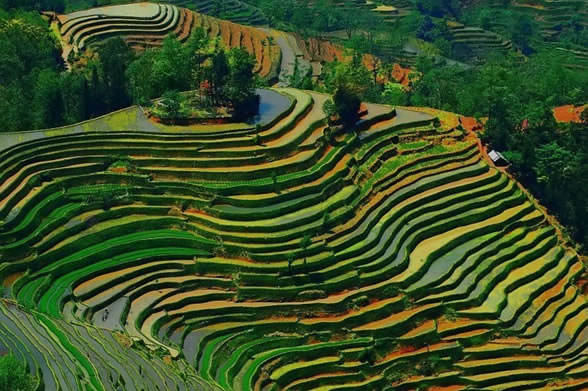 There is a game called Dwarf Fortress that make you take care of a lot of this issues.

If the lava smiths and engineers are channeling the volcano's heat and magma for various purposes, that could (at least in theory) relieve some of the pressure. This would reduce the chance of a new eruption.

You say it erupted recently, so it would probably be dormant for a while post-eruption anyway.

Recently dormant or barely-active volcanoes are a better way to go.

A recently dormant or barely-active volcano gives most of the benefits (usable warmth, power source, recently crystalized gems and jewels) and avoids many of the problems (eruptions, earthquakes, magma, poisonous gasses.)

The rub is that there are other underground-living/lairing species that also like just-barely-warm volcanos as their homes. And some of those aren't exactly into sharing...

I am not good with this but here is a suggestion:
Hurdle 1: Stone walls won't work, as once, in a medieval book, a fire burned so fiercely some stones in a stone wall cracked. This is that heat x500. Try something more fireproof, with some water. There should be a magma chamber holding magma, stay away at all costs, and make your city at the base. Is it underground though? Find some natural cooling things. Try hauling a lot of water there, then let it evaporate, which will cool you. Hurdle 2: Maybe somehow get wind in there, but this is a hard one for me.
Hurdle 3: Mushrooms, and things that hold well in heat.
Hurdle 4: We have made buildings strong enough to withstand strong earthquakes. Try using that concept.
Hurdle 5: Maybe a squad with buckets? Otherwise strong walls. Euptions: Choose a non-active or not as active volcano.
However: What type of volcano? This has been mentioned in a comment already. Is the volcano more flat, does it have an open top like science fair volcanoes, or does it have rock covering the top like a mountain? Please clarify!

Not the answer you're looking for? Browse other questions tagged society cities underground volcanoes infrastructure or ask your own question.

114
Could a Dwarven Civilization Exist?
8
What is a viable method to produce food within a volcano caldera?

7
What would be the practical considerations for a floating city always at day?
28
To assault a dwarven city
6
City in the wake of the Yggdrasil: Engineering Considerations
7
Fires in the ventilation shafts of a Dwarven city?
13
Architectural considerations for a city in a wind tunnel
4
An underground city beneath another city?
5
What type of city-structure can survive a shield volcano?
3
Defence against volcano?
7
Stopping a Volcano
6
How plausible is this volcanic eruption event? Dark Age without total extinction of Stone/Bronze/Iron Age people?