Is it possible for humans to live on such a planet?

Is it possible for humans to live on a world with the following conditions?

Assuming atmospheric pressure is similar to Earth sea level, the number that immediately jumps out is 20% carbon dioxide. This is far above levels in Earth's atmosphere.

According to the wikipedia page, symptoms of hypercapnia include diminished vision, shortness of breath, sweating and unconsciousness at 8% CO2 in the air. (Earlier symptoms include drowsiness, headache, confusion, increased heart rate, etc.)

Other than that, the percentage of oxygen is within the range of what existed in Earth's atmosphere during the Carboniferous period, so I doubt that would be a problem. Temperatures are within the range found on Earth. And you mention that pure water is available.

So if humans live on this world, I think their first concern (by far) would be scrubbing CO2 out of the air they breathe, and their next concern would be whether the "robust plants" that tolerate acidic conditions are edible.

Mmm, in a 30% oxygen environment, human hair and some fatty human tissues would burn like a paraffin torch at the smallest spark. 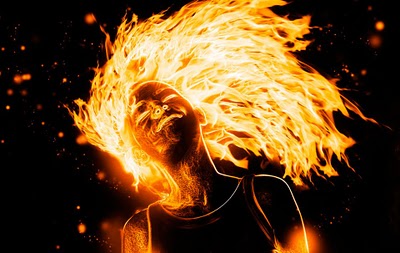 Funny thing, most of the rest of the universe is far, far more hostile to humans than the environment you describe. So, with gas masks glued to their faces (and absolutely no smoking) they might survive for a while, especially if they can build (fireproof) controlled environments where they can, for instance, safely take off the masks to eat, drink and complain about being sent there.

In fact, assuming Earth-like atmospheric pressure, that is a relatively welcoming environment compared to most of the rest of the universe. We would be very lucky if Mars had such an atmosphere. Humans will, though, need some sort of breathing apparatus when outside as (has been pointed out) the amount of CO2 you describe would be toxic, and appropriate shelter depending on what you mean by 'some rain is acidic'. But otherwise the temperature range is quite pleasant, having O2 in the atmosphere is good (might actually be a bit high, but irrelevant since you can't breath the atmosphere directly anyways), and even the CO2 might be conducive to plant growth.

Another problem (beyond already mentioned way too high CO2 - which would also cause greenhouse effect and baked the planet, a MAJOR problem) is low N2 (minor problem). Many plants use N2 from atmosphere, it would be harder to do that.

Ocean would be more acidic and food chain would be very different - most small animals would not be able to build shell in such acidic water. Ocean would be ruled by jellyfish and algae.

Not the answer you're looking for? Browse other questions tagged science-based reality-check planets humans survival .

7
Is this 80.000km-diameter world plausible?
22
Reality Check: Habitable moon around earth-like planet
24
What effect would liquid sulfur oceans, sulfur dioxide in the atmosphere have on visibility, sound propagation and other environmental information?
6
Geography and Appearance of an nitrogen/ammonia planet
11
Determining climate and biomes in a non-planetary setting
3
How could we (modern humans) get established on a hot planet?
2
Could a habitable gas giant with an electropshere exist?
6
How can we survive if the ocean started draining?
5
What is the largest achievable oxygen-atmosphere world?