How to explain truly emotional ghosts? 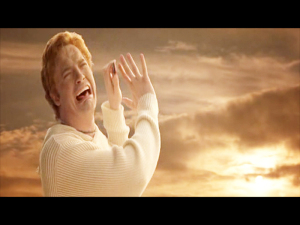 The Oxford Dictionary definition of a ghost is fairly static and boring. Using popular science fiction which has evolved from more ancient folklore, we can consider a ghost to be anything from; a wispy image, to entities that are stuck in a repetitive action cycle with no interaction with the living world (think scary repetitive sequences replaying the moment of horrific death), to messenger guide type ghosts who helpfully point people in the right direction, to a fully interactive spirits/astral projections/lost souls/ even transferred consciousness's with all the memories of the Deceased/Original person. These interactive 'entities' AKA 'ghosts' can interact with the Living world and react to outside stimuli (think, Casper, etc).

I figure that they would be able to remember how they may have reacted to any similar situations, and even mimic those emotions. But I'm having trouble deciding if and how they would truly feel or if they would just be going through the motions? Would they be able to feel emotion about new experiences?

Edited Note as current scientific knowledge does not accept ghosts, please take a pinch or two of salt when considering answers. I'll accept alternate theories but am hoping for as realistic an approach as possible.

Note I'm not asking how to create a ghost which was a very interesting question I linked above. I'm focussing just on how to make it feel emotions.

Note I'm not asking about Artificial Intelligence having emotions as that would be too broad. I'm focusing on incorporeal entities with a living, human-body origin/backstory.

Note for the sake of clarity, answers should consider a transferred consciousness as a 'ghost' from the moment of the copies 'creation' to the moment of 'implantation' into a new living body. Any interaction this consciousness may have in a technological environment, via computers or holograms etc., should be considered the equivalent as on the ghostly plane. Examples 'Tron' would be ghosts, 'The Sixth Day' would not be ghosts. 'Avatar' would not be ghosts either (The 'Avatar' example is actually a bit complicated and I have another question lined up about possession :) )

Note Also, I'm NOT asking how much tech is needed to go about transferring a consciousness. Answers to that last question focused mainly on the amount of computer processing power needed and not if and how the copies would be able to feel and interact.

Image source: Picture is from the movie 'Bedazzled' 2000 taken from the Dismantled Possessions Wordpress Blog.

The best explanations for ghosts and/or ghost-like creatures (GLCs) I've seen in literature tend to say the GLCs are one of two things:

Many more detailed variations exist, but they tend to fall into those two broad categories, emotional after-image or tortured spirit. (This ignores categories of other non-corporeal beings that may appear to be ghosts or GLCs, but are not.)

As for the "scientific" explanation, we cannot provide one because science has so far been unable to even confirm the existence of GLCs in any reliable, scientific, peer-reviewed way, much less explain what they are. At least not in the real world. In fictional worlds, it's up to the author to decide. Is it a soul? Is it some sort of aetheric residue? Is it electrical energy akin to static electricity? Is it some sort of quantum energy state caused by the manner of death or by extreme emotions? It could be any of those. Or all of those, if your setting allows.

Well. What if how 'we' define emotions is 'biochemical reactions in the brain', but in your world it's not just the physical?

Let's take Eastern Mysticism for an example. Instead of just the physical, each person has multiple bodies, coinciding in our lived reality:

Now, there are quite a few different views on this. The 7 chakras, 'hovering soul' theory, which is why yogis avoid cities and the tall buildings therein, the 4 bodies, and likely quite a few more I have yet to hear of.

If you were to decide that 'ghosts' are beings that shed the 'physical body' (kicked the bucket, pushing up daisies, etc) while being unwilling (or for any reason under the sun 'unable) to let go of their mental/emotional bodies?

There might be an emotional trauma that binds them to this plane? Perhaps anger at their (in their not-so-humble opinion) untimely death? Perhaps an unfulfilled ambition that haunted their every thought in life?

As a nod to currently known science (and those who believe in these 'alternative realities'), let's say there is a feedback loop between the bodies. Strong emotions affect the mental and physical bodies. So, they would affect how we think, and perhaps tense the muscles and perhaps even cause the stomach lining to bleed? Affecting hunger and sleep? No problem with this theory in place!

So, you have a ghost that has emotions, memories (from the mental body), and perhaps some ghosts that don't? Perhaps their grip on these other bodies loosen over time? So if they don't 'pass into the life hereafter' before a certain time? They become mindless... whatever, apparitions.

This then opens the door to other mythos to go with it. Like hungry ghosts, Yuki-Onna, and any other mythological ghost/demon.

Here is a plausible twist to ghost emotions.... Ghosts are essentially a soul in the form of energy. For the souls that linger, they are usually said it is because they have "unfinished business" and usually involve a good tale of them being killed in some way. The emotions of the soul are transferred with the energy whether it being a positive or negative state. The ghost state of the soul would then be imprinted with emotions last felt before death. Could argue that this would explain why walking through some areas of graveyards give off crazy vibes due to this displacement of energy.

This also would be perfectly plausible if you buy into the notion of String Theory. Everything is made out of energy down to the smallest level matter can be broken down into. You would easily be able to argue that an emotion when broken down far enough is just another form of energy since that is what is created in a neural impulse/ chemical reaction anyways. a signal or energy is required to transfer from one node to the next. and a bi-product of a chemical reaction is energy (notice many reactions have heat dissipation/displacement).

I think we have to consider two things.

The first is rather easy, and defined in your question. To have physical emotions requires chemical reactions and electronic impulses. These physical phenomena are easily created in a human brain. There are electric pathways between neurons in the brain that allow for signals to be created, sent, and processed. The brain also includes cells and non-cellular fluids that allow for many aqueous reactions to take place. It also houses certain nodes that create chemicals (like oxytocin which is a key chemical in the emotion of happiness) and disperse them throughout the brain.

In my mind, this means that emotions require some sort of aqueous solution, electronic pathway, or both in conjunction.

The hard part of answering your question is #2. How can electronic pathways and aqueous solutions be replicated in a spiritual entity? I have a few plausible answers that only stretch science a little.

Electronic impulses are energy. Currently our exact understanding of energy is limited and we are not sure exactly how heat, light, electricity, motion, and other sources of energy are related. We do know that energy is transferred often and rather easily however. Heat is lost to surroundings, electricity travels through air, and colliding objects transfer energy.

Your ghosts initial transfer of energy could be heat leaving the body, or neural impulses escaping a dying mind. This could also explain why those who die in accidents or dire circumstances remain. They were exerting more energy at the time of their death. It could also be used as an explanation of why ghosts can or can not be seen. When energy is concentrated in a small area, gas can turn to plasma. Air as a plasma is visible, while most gasses found in the air are not. When a ghost is present, it is simply the concentrated energy of the deceased.

In short, transferred energy to the air upon death can replicate the neural pathways in a brain. This energy transferred to the space around a dying person can also start chemical reactions, further leading to the occurrence of an ethereal replica of whoever died.

To explain the chemical aspect of emotion we need to look at air. Air is a collection of gases mostly, but generally contains a solid amount of water. Humidity in the air could (and does) allow chemical reactions to occur, especially is energy like heat or electricity is introduced. The combination of energy transferred from a dying body to humid air or a liquid can be a feasible explanation for a ghost.

Perhaps this could explains ghosts being prevalent during dark and stormy nights, mists on the sea, or in old humid attics and basements.

Something I would consider is that these reactions, while possible to an extent in the air or water, are not nearly as powerful as those in a brain. However, this is not an issue, as it gives a convenient explanation as to why ghosts are not exactly like a human. I would recommend making a ghost more like a "shell" or "reflection" of the human mind they once resided in because of a lesser capability to undertake the same physical reactions. Therefore they would experience emotion still, but less emotion.

If emotions are based on chemical and neural reactions inside a physical brain, and if no physical body is involved....

You can't because the sentences are logical contradictory. You need to lessen the constraints to get options, pure physicalism (which the first sentence describe) does not allow ghosts per definitionem.

EDIT: After loosening the constraints there are several possibilities.

The one is that consciousness/self-awareness/emotion is not or only partly a physical process.

Either there is an

The human mind is an electro chemical brain activity. But it is possible (not very likely) that the electromagnetic fields generated by a living brain might continue to function after death and that someone might have some sort of consciousness and emotions after death.

Googling this: are ghosts electromagnetic fields?

Not the answer you're looking for? Browse other questions tagged reality-check mythical-creatures consciousness memory ghosts or ask your own question.

26
How could ghosts be explained without an afterlife?
28
How can you have dualism in Hard SF?
47
How powerful of a computer do I need to simulate and emulate a human brain?
14
Can robots in any case learn and adapt human emotions?
8
Can people upload their consciousnesses to computers?
2
Scientifically Understandable Souls?

26
How could ghosts be explained without an afterlife?
61
What are the conditions in which a creature would evolve more than one brain?
2
Can a theoretical case be made for “transporting” consciousness via light?
21
The Physiology of people living on a world with 9 year days
5
Feasibility of Neutrino-based Energy Beings
2
What reasons would the government need ghosts?
5
How to disguise a ghost with the Masquerade in full effect?