Say you were to implement in the cranium, a series of baffles (similar to the system used in an airplane, to prevent the fuel from sloshing around). And arrange them in such a way as to partition the skull, and subsequently the brain inside, in a number of smaller spaces (separated by relatively rigid membranes). Thereby reducing the overall potential inertial energy available in the contained "fluid" in this case the brain... so that if ever the head is subjected to blunt force trauma, the "sloshing effect" would be greatly reduced if not cancelled completely. 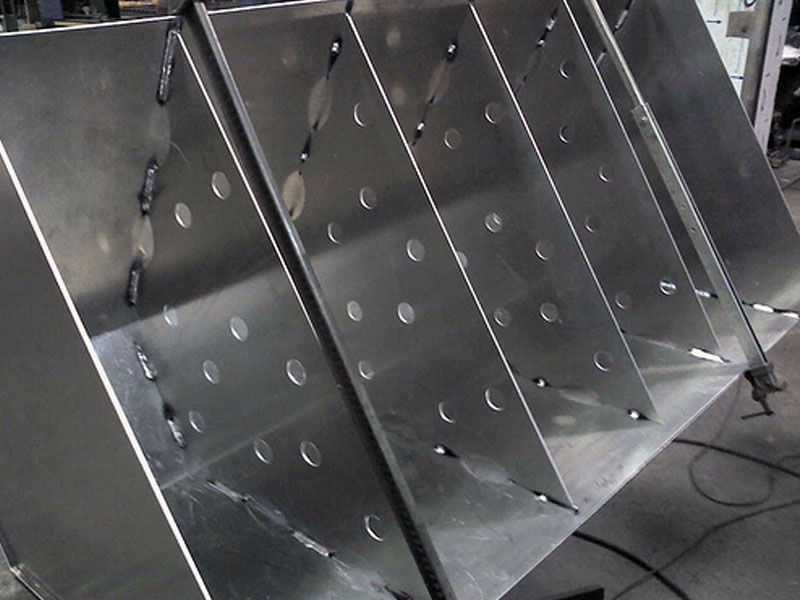 ^ an image ^ of the inside of a fuel tank showcasing a series of perforated baffles designed to reduce the movement "sloshing" of the fuel.

Assuming that the separation does not sever synapses (rendering you brain damaged), and being done with some sort of nano-technology, or some such.

Would it be possible, or at least plausible, that this could work?

The purpose of this question is to discover a method that can prevent concussion, brain bruising... liquefying... or at least theorize a plausible futuristic method.

I mean, if I was Wolverine and had this anti-concussion stuff, then I could be shot in the head with a bazooka. And assuming the rocket wasn't tipped with Adamantium, then I wouldn't be fazed, and my brain would be chill as a cucumber :D

The baffles solutions solves the fuel sloshing problem by dispersing the momentum of a fluid onto a solid plate, and it mostly does that so that the fuel pump intake or level measurement doesn't become uncovered unexpectedly. Also, at eight pounds a gallon, if you let that slosh at full speed on a dead stop, the tank itself has to be a lot more robust to not buckle under the dynamic forces.

Even if the brain could have survived having the baffles installed, which is unlikely, the baffle would only serve to become the thing causing the tissue damage. Worse, if the acceleration was applied along the direction the baffle was oriented, it would cause a very high cutting force to be applied to the edge of the baffle.

The key problem is that brains are complex, and human brains are more complex than many other kinds. It abstracts to an electrical signaling network, but it does that with complicated chemical interactions and ion exchange. Ultimately the problem you're trying to solve comes down to protecting the paths supplying oxygen and nutrients, and preventing the signal paths from being interrupted.

Helmets work by providing a space in which the head can float a bit, pushing around a cushion. Accelerating the helmet also accelerates the head, but any steep changes hopefully get rounded out by the padding. An internal solution would either have to mimic that, or simply make the brain more durable somehow. One solution is to backup frequently and rewrite after an incident; this is used in the setting of the webcomic Schlock Mercenary. An alternative is to simply avoid the problem by other efforts using remote access, á la Ghost in the Shell or Surrogates.

Could it work? Possibly, but its not a good solution:

Lets say that you separated brain into smaller parts, each one responsible for different area. If I hit you hard enough in to brain part that is responsible for, lets say, vision, I would still cause a concussion and possibly damage your vision. True, I wouldn't damage parts of the brain that sit in other compartments, but I'd still do damage.

Also if I'd damage one brain part, its quite possible it would start sending wrong information to other brain parts causing gods-know what effects on your body. Here lies another problem: if you want to separate brain parts leaving only small gaps between them you will greatly reduce the transmission speed between those parts.

Nature likes simple solutions: look at animals that fight with their heads, i.e. bulls or even better this guy called Pachycephalosaurus: 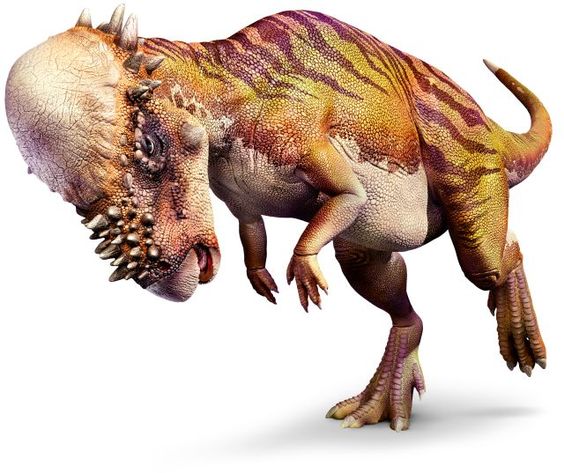 Instead of having complex brain compartments they have thicker skulls that absorb the impact and reduce the damage.

First is the simple mass of the brain. If I crack my head into a wall, the front of my brain is going to impact my skull. However, since the brain is fairly squishy, the back of my brain is going to keep moving forward, compacting the gray matter inbetween and damaging it. When it rebounds from said compression it will then impact on the back of my skull, causing further damage.

Second, is that the human skull isn't smooth inside. There's all kinds of nasty sharp edges that can actually lacerate your brain tissue if you hit your head. 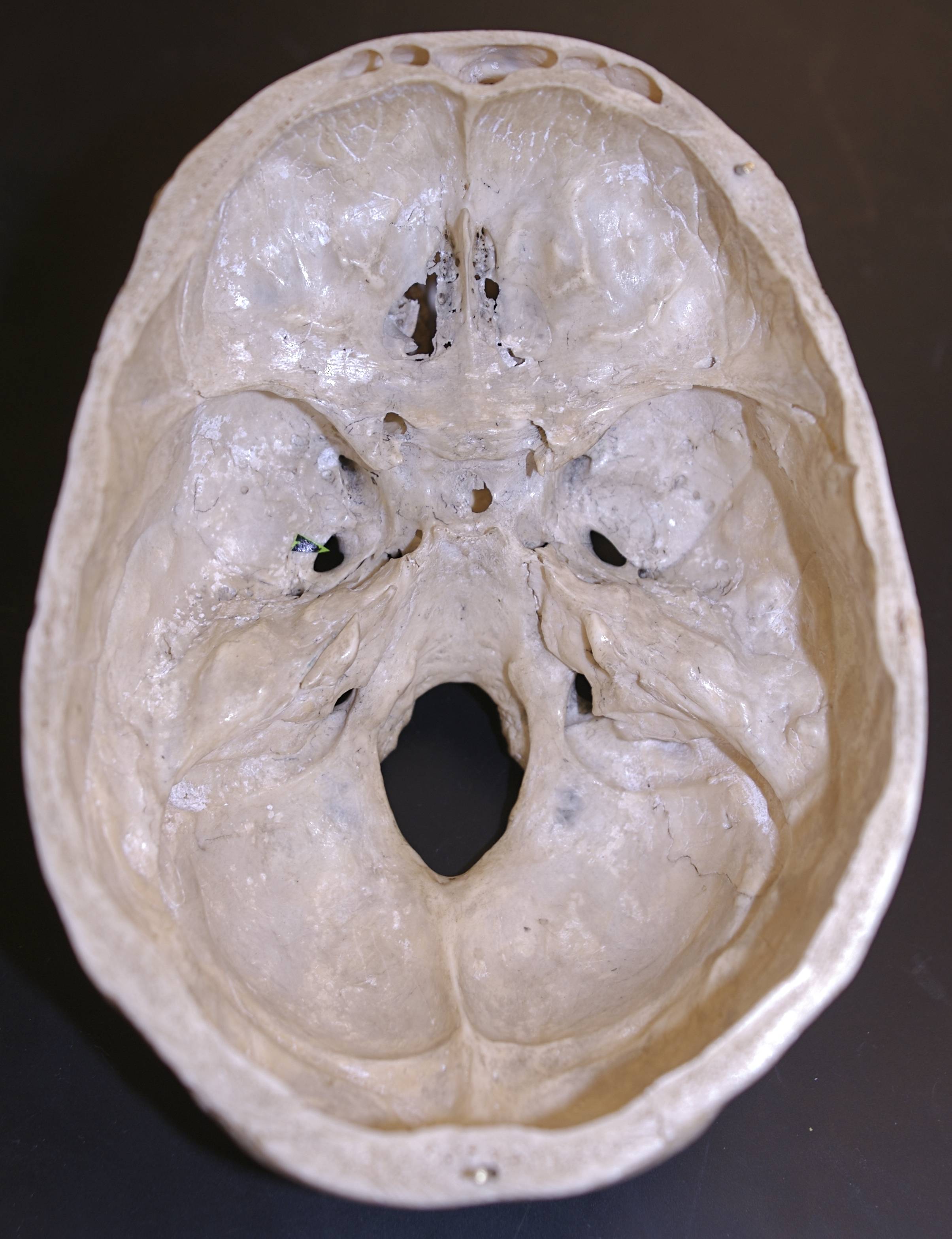 So, the solution is twofold:

First, figure out how to more securely anchor the brain. The most extreme and far fetched idea I have is to weave a lattice of carbon nanotubes through the skull to cradle and dampen the motion of individual neurons. The brain is then much less elastic in a collision, and won't slosh to and fro.

Second, is to smooth out the inside of the skull. This would be some pretty extreme surgery, but remotely possible with modern technology. By doing this you'd reduce the trauma the brain experiences when being lacerated by your own skull.

Yes (to an extent)! due to the square-cube law.

To simplify, i will be treating the brain as a cube. This assumption is of course wrong but it will nonetheless demonstrate my point.

The problem with accelerating the brain quickly is the large force (and thus pressure ) required to do so, if we imagine the brain as a 1400 g cube of water (a reasonable assumption) then 20G of acceleration along one of the faces causes a force of 275 neutrons on one of this cubes roughly 121 cm^2 face. This is a pressure of about 20 KPA or 0.2 atm (which seems to small, despite the fact i've double checked my math.) anyway, if you then split your cube into eight smaller cubes each cube will have half the volume relative to the surface area, and thus half the mass to accelerate. Thus the force (and pressure) on the back face on each of theese smaller brain cubes is halved! the more you divide your brain up the smaller these forces will get. It's the same reason that shorter towers are stronger.

That being said you need to make your supports out of something VERY strong, probably titanium since it's light strong and biologically inert. You could try drilling small holes in your titanium to feed synapses through but i doubt that'll work for many reasons (you'd need to reroute synapses, perform brain-surgery more precise than any in human history and you'd weaken your titanium). I'd advise using "smart titanium" that can operate as a synapse instead (though obviously not perfectly otherwise you'd just build an entire brain out of it.)

A good rule of thumb is that your resistance to G-force increases by the factor of the number of divisions you have along the axis the G-force is experienced on.

This system should also work with ANY of your internal organs, (provided your titanium boundries don't prevent them from functioning of course.

The titanium boundaries should also serve to reflect shock-waves to some extent as the moved through regions of varing density. Though obviously this doesn't protect the regions OUTSIDE the boundaries. That being said i'm not overly experienced in the mechanics of shock-waves so won't give a definitive answer in that area.

Not the answer you're looking for? Browse other questions tagged reality-check science-fiction brain cyborg or ask your own question.