(How) can I provide reliable water sources in a world of flying islands?

I have humans who live in a world filled with floating islands. These islands span all heights in the planet: from the core to the upper atmosphere. The problem I have is that most of these islands are too small to have an internal water cycle. Is there a way to provide the people with a reliable source of water? if so, how would I go about doing it?

While I am answering my own question, this is by no means a definitive answer, please contribute your own if you feel there are other alternatives

There is a kind of plant in the Andean regions of northern South America called Espeletia (also known as Frailejón). 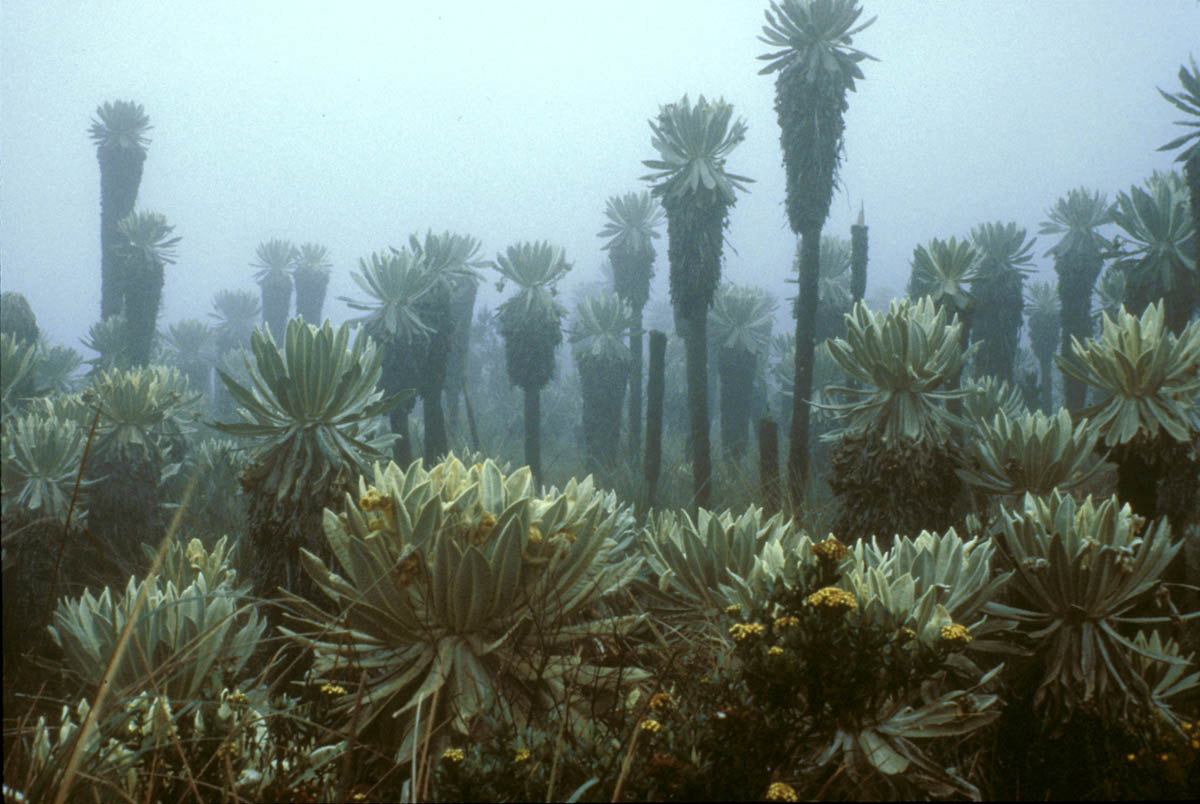 This plant converts air humidity into water with the help of its hairy leaves. It then gathers this water in its trunk and releases it on the soil through its roots. Large populations of these plants can feed entire rivers with water.

Given the environment, it's not a stretch to have a large number of plants evolve to have similar water-condensing mechanisms. Such mechanisms would provide the plants in question with water, as well as other living beings that may benefit the plant. Such as other plants that to help create nutrient-rich soils and animals to help spread seeds.

Another additional source of water would be cacti-like plants. Plants which gather water inside of them instead of releasing it to the ground. These plants may then be eaten as a source of nutrients and water.

Fundamentally you need a large enough body of water for evaporation to occur.

There are two options, the simplest is just to have a "water world" with an ocean down below and have the islands floating above it. That could fuel a standard water cycle, with the islands getting rained on with water evaporated from below.

Floating icebergs. The island dwellers catch and melt them.

I can think of two relatively realistic...or at least plausible options.

Larry Niven's novels "The Smoke Ring" and "The Integral Trees" imagined life in a diffuse ring of planetary debris orbiting a star. In that world, plants pulled moisture from the air in manners similar to our epiphytes (or what's been described above). People sometimes had ways to exploit the plant mechanisms, or sometimes traveled to large floating "lakes" to extract water from them.

In Niven's "Ringworld" books, there were artificially floating cities with chilled condenser funnel systems for water collection. They worked on the same principle as condensation forming on the outside of a cold drink in the summer time.

Simple rain collection might work at some strata of the atmosphere, though I'm unsure whether physics is friendly to the idea of this happening at standard temperatures and pressures. You might find XKCD's "What If?" on the subject of dropping a submarine into Jupiter helpful for understanding this.

One possibility (Though I don't know if the physics would work too well) could be simply that the inner layers of the gas are really hot, probably due to extreme greenhouse effects and such. It is hot enough that water always evaporates and it gets pushed back into the atmosphere. Then, it cools into clouds and rains again.

This could help keep the habitable higher areas warm, and also would provide the air with a lot of water. If you have plants that absorb water from the air and leak it into the soil, this gives you a 1-2 punch of water. The rain saturates the island, but most of it seeps through, and then it evaporates and rises up for the plants to gather. The islands get saturated, then keep it for a long time until the next storm comes in.

This would mean there is a lot of rain and large, powerful storms, but that could be a good thing that drives the plot. Gas Giants are going to have hectic weather, so it should constantly be hurricane season.

The Death Gate Cycle (by Margaret Weis and Tracy Hickman) has four worlds, one for each classical element... the air world is a space of floating islands with inconsistent rain... water is provided by a giant sky pump, a mechanical device that spouts water up into the air, created by the gods at the same time the world was created.

Water is a side effect of the hover mechanism

Alternatively the gravity effect is a side effect of some kind of portal technology, and all of the water sources generate a localized gravitic effect which causes the land in a small area around it to float. Larger portals feed bigger lakes/streams but also loft larger land masses.

If the planet is a puffy gas giant, you could assume that it may have a moon made of mostly ice on the surface with a liquid core. That moon would be rotating around the gas giant relative to its shadow, always remaining cold on the surface.

As planet rotates in its orbit it causes a tidal pull heating up the moons core causing it to release its liquid water core over a given interval via geysers shooting hundred of miles into space.

The gas giant, being larger will be massive and have more substantial gravitational pull, therefore attracting the ice. Condensing and warming in the atmosphere it then rains down on the surface of the islands, collecting in pools creating lakes, waterfalls etc... As an added benefit, you get rings around your gas giant.

Reclaiming the humidity from the air.

I actually know someone who has a device like this in his house. Basically, it just condenses water from the (incredibly humid) air and keeps it in a small tank.

This is relatively simple technology, all you really need is to cool a sheet of glass or metal a little, and water will condense.

Assuming air with high humidity you can catch the water with nets.
https://en.wikipedia.org/wiki/Fog_collection
https://www.newscientist.com/article/mg22229754-400-fog-catchers-pull-water-from-air-in-chiles-dry-fields/
http://news.mit.edu/2013/how-to-get-fresh-water-out-of-thin-air-0830
With lightweight nets (e.g.: carbon-fiber) you can do that in a large scale. It is also a unique feature, useful for a part of the story and/or the illustration on the cover of the book.

Are these islands steerable? Or just drifting in the air?

The people could have terraformed the world by collecting water in pools on the islands from space, which eventually caused enough evaporation to start a water cycle and would create a core of water.

Condensing water would work, through plants or technology.

Or there could be a sort of water trade going on, whether they bring water from space (ice in meteors) or from people carrying water from the core up to the islands.

Each island simply needs a supply of hydrogen and oxygen, as well as an energy source. Binding hydrogen to oxygen to form water is a simple process. But, it is dangerous because hydrogen and oxygen are flammable. For example, the Hindenburg fireball created a lot of water.

Even if they are not big enough for their own water cycle, they still could be OK with water/rain from the planet itself (if this happens). As long as there is a reasonable amount of soil/absorbent material, then the floating island will be OK for a few weeks on its own in between rain showers.

The islands are floating at rain cloud level. Every time they float through a cloud, they have a good chance of triggering precipitation (rain), similar to how mountains tend to encourage precipitation IRL.

If you could let the “core” of your puffy gas giant be hot and dense (and therefore necessarily unpopulated), than it could propel warm saturated air into the upper atmosphere via either stable or volatile thermal currents. The water would condense and rain back down, to be caught in rivulets and lakes on the floating islands. As a side benefit, if you went with the volatile option, you now have an extra unpredictable hazard in your world. Perhaps the people have learned to predict these violent uprisings and move islands safely out of the way. Perhaps the people on the lower islands have developed technology to manipulate these thermal uprisings, thus bringing water to where it is needed, and holding it back where it is not.

Is there a reason clouds similar to earth won't occur? If there are temperatures similar to earth somewhere in the mix of island, then clouds, storms and winds could still occur. As the islands are not fixed, this would be a lot more serious but clouds floating by an a gentle breeze could be harvested. If clouds or fog patches are common enough then they could be harvested for water by even simple setups.

If it's a fantasy setting, and the islands float because of some magic or entirely different physics, it would be cool to have bubbles of water slowly drifting from the planet 'surface' to the outer layers of the atmosphere. Catch 'em with a net. If caught, they stop floating and behave just like water here in our world.

Maybe even make a water shell outside. Would be interesting to see the Sun shine through it.

You could use technology currently available today.

A fuel cell converts the chemicals hydrogen and oxygen into water, and in the process it produces electricity.

If I'm not mistaken, these fit the bill. https://www.buygreen.com/products/pem-reversible-fuel-cell?utm_medium=cpc&utm_source=googlepla&variant=3181636609&gclid=Cj0KEQiAzsvEBRDEluzk96e4rqABEiQAezEOoBJRRj_6y4mYPozErvoaD8Rwit9BQfOSoieG959rFN0aAs5X8P8HAQ

However you'll have to call the company to confirm and/or test them out before relying on them for the gas giant.

Unfortunately I don't have the reputation to comment on my own answer (nor is there enough room) in response to: "Note that using electrolysis to make the fuel cells takes more electricity than the electricity it will produce. – Anketam", so I'm responding here.

Anketam, thanks for your comment. First, note that electrolysis is not used to make fuel cells. Electrolysis of water produces hydrogen, which I presume is what you're actually referring to. Converting that hydrogen back to water may or may not produce less electricity than went into producing the hydrogen, but it does make sense as there are likely to be losses in the system. On the other hand, perhaps the scientists in the OP's world have perfected the system to 100% efficiency.

In this configuration hydrogen functions as a battery in a sense. Obviously there are other ways to generate electricity as well such as wind for example so electricity is essentially "free" - after the initial capital investment of course and any ongoing maintenance which should be minimal. Perhaps volunteers donated their time to building the system and therefore cost nothing but their donated labor. Or not, as the OP chooses for his world.

Not the answer you're looking for? Browse other questions tagged science-based reality-check geography water .

8
City on a Cloud - how to build an effective water supply?

10
In a World of islands floating in the air how would people navigate?
33
Can airborne floating/flying islands be scientifically possible?
2
Floating ships on dense clouds?
11
How would a world with drifting land-masses be mapped/charted for navigation?
11
Would Floating Islands Dampen Waves on a Water World?
11
Weather in a 5 mile deep crater
4
How does composition change if you extend an Earthlike atmosphere 50km below sea level?
2
What kind of atmosphere is needed for large floating organisms?
6
How would huge chunks of floating land soaring the skies really fast affect my world?