Breathe in space, with or without a suit?

I've been wracking my brain about a world I'm writing in, how to make some group of regular people able to survive in space for extended periods with or without a suit. I can reduce the amount of time they'll spend via a deus ex machina, but I'd prefer to really drive certain points home by allowing inter-planetary travel.

The characters have the ability to alter the physical properties of the world around them, but they can run out of energy or lose concentration and will be at the mercy of the elements (in this case, space!). This is accomplished by some technology that converts their knowledge of physics into phenomena, and just about anything is within their ability to affect.

I'd like to be able to figure out a way to have them travel without a suit at all. Because they have power over the physical world, they can pressurize a bubble around themselves. My concern is how long, realistically, could a character with infinite energy and a machine to convert that energy with infinite efficiency last? Can they reclaim large amounts of breathable air from their waste (breath) or from water?

From my own research:

I'm guessing that the obvious thing to do would say that the character can break up the CO2 he breathes out back into oxygen and expel the carbon, but the reclamation of that, I assume, would be very small, but I really don't have a good frame of reference for how to measure parts of gases.

Does anyone have any ideas on how I could have the characters explain what they are doing to survive?

We write a lot of equations such as $C_6H_{12}O_6 + 6O_2 \rightarrow 6CO_2 + 6H_2O$ to describe combustion, but in reality it is better written $C_6H_{12}O_6 + 6O_2 \leftrightarrow 6CO_2 + 6H_2O$. All chemical reactions we are aware of work in both directions. The "one-way-ness" of some operations is merely that entropy highly favors one direction under some circumstances, so much so that it is convenient to approximate it as a one way trip.

A creature which could bend physics could set up the situation such that it is more convenient for the reverse equation to occur. In doing so, he would have to pay the piper... he would need to put enough energy into the system to make this reaction favorable (which is as much or more energy than he got out of the reaction). A character with "infinite energy" would have zero trouble with this... literally none at all (well, some small epsilon of trouble). As long as you don't lose any matter, all you are doing is rearranging structure.

The fun part is Sanderson's First Law of Magic

SandersonŌĆÖs First Law of Magics: An authorŌĆÖs ability to solve conflict with magic is DIRECTLY PROPORTIONAL to how well the reader understands said magic.

Sanderson's law fits nicely with Arthur C. Clarke's law, "Any sufficiently advanced technology is indistinguishable from magic." In his blog, Sanderson explains that "magic" is really any plot device which is not easily explained.

Your challenge is to make the reader understand the magic of space-travel well enough to allow you, as an author, to send characters through space. Whatever construct you envision needs to be understandable enough by the reader that you can get away with it.

For example, while it may be most efficient to allow the traveler to simply disassemble molecules at will, such behavior leaves the reader lost. However, if the traveler can, say, recreate a miniature reality of a solar system he once visited, complete with suns and trees, and carry it with him he can rely on that ecosystem to do the work of photosynthesis for him. Readers understand our ecosystem, so they can relate. (such a system would be less energy efficient than raw molecule conversion, but that's the price you pay for magic that readers understand... and an infinite energy creature won't have much trouble). He can simply pour his "energy" into keeping the miniature sun burning, which is much easier to do in reader's eyes because the sun is more uncontrolled. Generating oxygen atom-by-atom would require a great deal of control and sensitivity.

If the traveler has a flaw, this could also lead to plot devices. Consider what would happen if he lost control of this miniature reality. Might the sun go nova? Could he bring biology from one planet to another by accident? How would the traveler alter his travel plans to avoid making a mistake? Perhaps he actively dismisses the trees and sun long before arriving at the planet, basically holding his breath for the laws few million miles. This could create a potential plot point if he were intercepted after dismissing his source of life.

What might happen if we were part of that miniature reality, and he was about to dismiss us before arriving at his destination?

If they have unlimited energy and advanced technology, they can create matter. This is a result of the mass-energy equivalence. So they can produce oxygen or whatever they need.

Current technology is not exactly there yet but is on the way.

Have them change their bodies, so they don't actually expel wastes. CO2 goes into their body, where some chloroplasts are fed light to turn it back into O2.

With the right design, you don't even need the magic powers - just some good genengineering. And, of course sunlight or power input.

So assuming unlimited energy to power this reaction, and a large enough supply of water, it would be easy to renew the oxygen bubble by converting waste carbon dioxide to glucose (or a related sugar) and more oxygen.

Of course, this assumes no other requirements (such as food, water to drink, etc.) and doesn't address the length of the trip at all. But with unlimited energy, it's very easy to recycle your air.

The simple thermodynamic answer is:

You need as much energy (in the opposite direction) to convert CO2 to O2 as you got when you converted it from O2 to CO2.

I must admit I don't know what that number is, nor what the biologic role of breathing really is (is it for energy exchange? or to catalyze other reactions?) but since we get most of our energy from food, I think it's more the latter, so... they could just eat a bit more and use some of that energy to manage it. Consider that it'd be approximately the same as breathing twice as hard as normal.

As others have said, given sufficient energy this is trivial. Simply strip the carbon out of the CO2 and they're good to go.

However, there is another problem: Heat. Since they have infinite energy available I'm not going to worry about them being too cold, but how do they handle the opposite problem? I have a hard time picturing anything like 100% efficiency in this reaction.

Without a suit, the person is exposed to the vacuum of space. In the absence of pressure, their blood will boil as the gases dissolved in their blood return to a gaseous state. Blood clots form, and the person dies a rather painful death within a few minutes.

If for some reason that doesn't kill them immediately, then they'll die from radiation exposure if they're anywhere near a sun, because they won't have the earth's atmosphere and magnetic field to deflect or absorb that. A good deal of the reason current astronaut suits worn outside the spacecraft are so thick is radiation shielding.

Your suitless space traveler may need a physiology that infuses oxygen and disposes of CO2 by some means other than gaseous transfer to survive in a vacuum, or maybe a hard shell exterior so that they can maintain a bit of pressure internally to allow blood in its current form to exist without boiling.

As for the radiation... maybe the hard shell could also double as a radiation shield, but now your people look like Ben Grimm of the Fantastic Four. A bit crusty... might want to avoid any romantic side plots.

Perhaps they could wear a personal force field, like the blaster deflecting personal shields worn in Asimov's Foundation series. These were just a belt a person wore... the actual shield that surrounded the person was invisible. That could both deflect radiation and act as a pressure vessel so that a normal person wouldn't need a suit in space.

There are two non magical answers to this, so you can take it for what it is worth and adapt it to your needs. 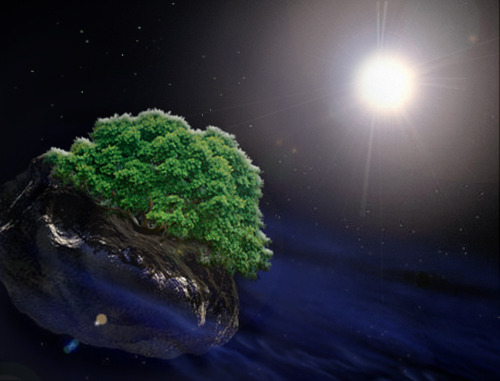 Living inside a space garden

The plant would need to be specially adapted to keep itself sealed against the vacuum of space, while allowing solar energy inside to run the ecology. On Earth, it takes about a quarter acre of land to supply sufficient food for a person, so it is probably safe to assume a similar amount of solar collection area may be needed to supply the symbiont inside.

2 Mad Scientist. Alexander Bolonkin has published a paper which essentially suggests that a human could have the equivalent of a heart-lung machine implanted. The cyborg would then only need to have the outer skin toughened enough to resist vacuum and solar radiation (You would get a pretty nasty sunburn in space), and a few other surgical or genetic engineering modifications to close the body to the vacuum (i.e. prevent moisture and gasses from leaving the body through natural openings. This is a pretty extreme cyborg, and issues like energy and material storage are not covered in too much depth.

Converting either of these ideas into magic will require some sort of authorial handwave. Perhaps the person needs to be in contact with a quarter acre of cultivated farmland via wormhole or some magical transference system in order to take advantage of being part of a pre existing ecosystem. Perhaps they do the same thing in a hospital to be hooked up to the proper machinery to survive in space.

You have infinite energy.

If you heat anything enough, it'll separate into its component elements.

When the Co2 concentration gets high enough, accelerate fast enough to push the Co2 to the 'bottom' of the bubble.

Separate the sections of your bubble to form two bubbles, closing off the majority of the Co2.

Use your infinite energy to heat the collection of gasses in the Co2 bubble to incredibly high temperatures.

Form the Co2 bubble into a disc, and spin it really fast while heating it. Use 'magic' to fling out the heavier carbon and just leave it in space.

This has the narrative benefit of not requiring 20 paragraphs of explaining gas mixtures or photosynthesis, and also a spinning disc of superheated gas would probably look cool as hell.

Not the answer you're looking for? Browse other questions tagged space technology physics space-travel or ask your own question.

3
Could an astronaut be lifted from Earth to the ISS in an EVA suit on a resupply mission not intended to transport humans?
2
Powered Assault Armor - How possible it could be with near future technology
17
Could a large radio telescope survive interstellar spaceflight?
9
The viability of a skintight space suit
8
How can an individual with Superman like powers best harvest asteroids?
5
What plasma temperature range to expect from Earth atmosphere common elements?