How many parts of speech are there, really?

Consider a conlang designed for an interstellar transmission to a recipient that will have to figure it out.

I’m thinking it will be invented for the purpose, formal, and rigorous. It will seemlessly make a transition from mathematical notation or computer algorithms to stating facts about real-world things.

So besides the obvious nouns and verbs, just how many different “kinds” of words are there, really?

Does anybody know anything about ontology languages or Lojban? I wonder if there are more universal categories than the parts of speech used in English.

The reason I’m asking is because the number of categories shows up directly in my scenareo. There’s no orthography in a conventional sense, as the transmission is just a bunch of numbers. Words are simply numbered, so something like Noun #42 would be the literal spelling. There will either be different codes introducing different categories, or the category will be implied by its number: Word #42 is a noun because the type is implied by remainder of the number modulo 7 (or however many types we need).

Also, there’s no distinction between what we think of as words and punctuation. Grouping and separators also need their own codes and are encoded in the same manner.

(For those of us who have experience with compilers, the parts of speech are comparable to the classes of tokens recognized by the lexer, such as identifiers, numbers, operators and separators.)

For example, in Latin there are three very different patterns of inflection (verbal conjugation, nominal declension, and pronominal declension); adverbs, prepositions and conjunctions have no inflection but their allowed combinations are distinct (adverbs with adjectives or verbs, prepositions with nouns or nominal groups, conjunctions with nominal groups or sentences). Grammarians make tables with inflection patterns and allowed combinations; the cells of the table are the parts of speech.

For example, in English, we can make the following classification tree:

In English, verbs have a different inflexion pattern than nouns, and both have a different inflexion pattern than pronouns; unlike Latin, English makes little or no difference between nouns and adjectives (they are not really different parts of speech in English), but English has articles. (Articles work syntactically exactly like demonstrative adjectives, the difference being that a language is said to have articles if there are syntactic constructions where an article or demonstrative is absolutely required, with the label "articles" being applied to those demonstratives which have the weakest meaning.)

In languages with rich morphology the distinction between parts of speech is clear, and sentence structure is carried by morphology alone or with very little help from word order.

On the other hand, isolating language such as Mandarin have no inflection whatsoever (or almost none); in such languages the notion of "parts of speech" is much blurred, and becomes comparable to the difference between keywords and ordinary identifiers in programming languages. English is well on its way towards this; many English words can function as nouns, adjectives and verbs either completely unchanged ("they go" -- verb, "we had a go" -- noun, "all systems are go" -- adjective; or "go to a place" -- noun, "to place something" -- verb; or "have a drink" -- noun, "to drink something" -- verb) or with little change ("red" -- adjective or noun; "to redden"). In such languages with no morphology or very little morphology the distinction between parts of speech is highly attenuated, and the syntactical structure of sentences is represented by word order, much like in programming languages.

For example, in Latin "puer puellam vidit", "puellam puer vidit", "vidit puellam puer" etc. all mean "[the] boy saw [the] girl", whereas in English no other word order is possible without changing the meaning or making the utterance incomprehensible.

Parts of speech are really an artificial division chosen by humans to explain the structure of our language. They don't always line up perfectly. Take Japanese as an example. Japanese has "particles," which are words which don't fit into any particular category that we English speakers recognize. There are also the polysynthetic languages where a single word captures what we English speakers would call a sentence. And of course, in English we have some interesting words such as a particular expletive starting with the letter F which defy categorization (as demonstrated in this decidedly NSFW clip from the Boondock Saints).

One interesting option which is along the lines of your numbered words is to look at languages used to describe semantic webs such as RDF and OWL. RDF, for instance, is remarkably simple. There are three parts of "speech:" subjects, predicates, and objects. Subjects and predicates are always "IRIs" which are similar in nature to your numbered words. Objects are either IRI's or "datatype values" which are concrete values like numbers. That's all there is to it, and yet it can describe world with all the flavor of any more advanced language. 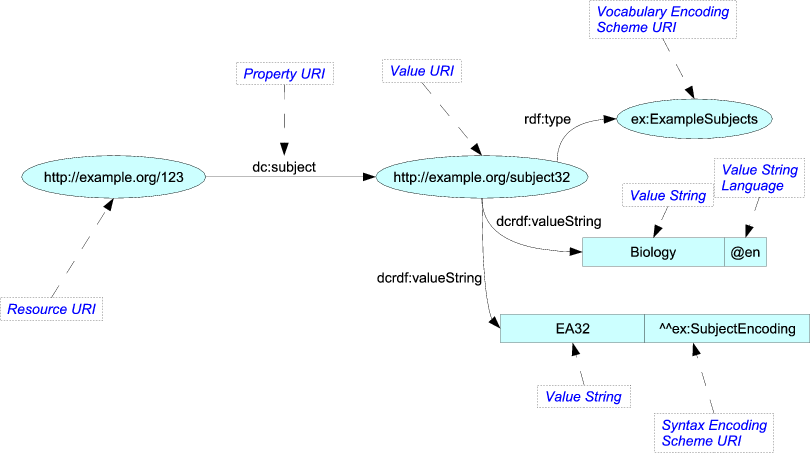 Of course, they wouldn't send it as a image like that. They'd render the content in a different format, such as Turtle, which is text based and more concise with easier parallels to a interstellar communication format:

OWL is similar in nature, but is rather fascinating because it can describe its own semantics rather elegantly. For example, you could actually have a rule "All Words which are the subject of a sentence are also Nouns." These relationships can be specified with enough regularity that OWL users can use "reasoners" to fill in relationships that were not explicitly written down in the document.

The fantastical power of these semantic web languages is that, if someone has not specified the semantics of what Word #42 should mean in a particular construct, or if there is no word which meets your needs, you can make up semantics for it. You can then write down those semantics (typically in an OWL Ontology). Others can read those semantics, and act on it algorithmically. So I might define a new Word #3.14 that you've never seen before, and I can do so in such a way that you stand a chance of understanding what I meant by it!

This semantic ability would be extremely important if time lags were large. Languages evolve over time, and if there's enough time lag between communications, its reasonable to believe that the meaning of Noun #42 might change for one culture and not the other. The ability to at least attempt to capture the semantics of what you are saying would be very important for combating these effects.

Language can be divided into several layers.

In order to analyse a transmission from an alien species, one would have to determine what the phonology is, then step through each layer trying to figure out how the pieces can be combined in valid and invalid ways.

Referring to the parts of speech specifically, I'm afraid that the classification system differs by language since we don't classify according to some universal system, we distinguish words into the same parts of speech that the grammar of that language uses.

Lojban (since you asked) does not have distinct verbs, nouns, adverbs and adjectives. It has predicates such as "prenu" (is a person) or "xamgu" (is good). One can say "le xamgu ku" (the thing which is good) or "le prenu ku" (the thing which is a person, or just "person") and in certain cases a lot of these particles can be omitted, e.g. ".i prenu cu xamgu" (the person is good) instead of ".i le prenu ku cu xamgu". This phenomenon (the arguments of a predicate) is somewhat like noun phrases in English but the language makes absolutely no distinction between what one could consider verbs and adjectives, nor should you try to classify them that way.

A "part of speech" is just a classification scheme, imposed upon the language by researchers, to describe classes of words. These groups are based on the grammar function of those words, and that's where we get "noun" and "verb" and "preposition;" they describe classes of words in English. But you also have nouns that act like verbs ("Google that.") and many further weird constructions that cause each "part of speech" to be broken down into its own part of speech, all the way down.

So there is no number for the sum total of "all kinds of parts of speech." English has one kind of adverb; Japanese has three. Are those separate parts of speech or not?

Now, if you want to classify the symbols in your language, there's a pretty good guide. Contact by Carl Sagan solves the exact problem you are describing; you need to start with first principles and build it into a complex language. SETI has been trying to come up with just such a message, and it's really, really hard.

If you can send pictures, you only need one "part of speech," the THING. With a THING, you can specify nouns; once you have a noun (ATOM) you can create an "equality thing" (ATOM = ATOM), and then go on from there, specifying THINGS which are numbers, counting things, etc.

You can use syntax to explain concepts like change over time ( PROTON = PROTON, ELECTRON OPPOSITEOF PROTON, PROTON + NEUTRON = NEUTRON, PROTON AND ELECTRON = HYDROGEN), but everything is just a THING.

If this sounds too handwavy (because it is) you might want to look into coding theory; what you're really wanting is a compression algorithm/parity algorithm that explains math using generic symbols.

Not the answer you're looking for? Browse other questions tagged science-fiction aliens language communication or ask your own question.

4
How are aliens to establish contact with a planet if there are blocs there locked in battle for years?
18
How would aliens in orbit know that communications from Earth are legitimate "official" communications?
7
How many languages can a person know at one time?
33
How are there so many species on the space station 'A long way from anywhere V'?
17
Are there any natural forms of communication as robust as speech/vocalization?
10
How can people adjust spoken language to adapt for the discovery that they live on a non-orientable surface?
4
Is there a reliable way to hide/convey a message in vocal expressions (speech, song,...)