Psychometry (from Greek: ψυχή, psukhē, "spirit, soul" and μέτρον, metron, "measure"), also known as token-object reading, or psychoscopy, is a form of extrasensory perception characterized by the claimed ability to make relevant associations from an object of unknown history by making physical contact with that object. Supporters assert that an object may have an energy field that transfers knowledge regarding that object's history.

That's definition that I got in wikipedia. Its one at the classic list of ESP.

Then I vaguely know about atom decaying process. Would it seems plausible in some stretch of particle physics explanation, if someone had an 'ability' that with his/her touch to an object he/she can get information from the atomic decay of the objects about when and what other object/materials had contact with?

I am going to make an attempt at a plausible answer, while keeping to the "physics" tag, as well as "abilities". In this, I propose a variation on something I once heard a Psychology instructor propose: simply that senses (organic arrays of sensors) do not confer information, it is the mind of the observer that creates meaningful, contextually useful information from that data. His conjecture, intended to be thought provoking, was that - Dogs 'Smell' history. Dogs don't know one year from another, and although they can become accustomed to a schedule, they have no 'sense' of time, at least not in the sense that humans do. The point being that when a dog sniffs his way around an area, his sense of smell is wired to a sense of who/what/when has passed by that area. Valuable skills for a carnivore. To your question directly, and with as little 'handwavium' as possible; consider that an individual might have an ability to perceive time more radially, than the ordinary one-way arrow of entropy. One could imagine that such a perception of all before-during-after events being simultaneously perceived is a short road to madness, and with practice subject is able to suppress all but the most local "now", however on contact with an object, becomes aware of that objects trajectory through a dimension most of us see only through the pinhole view of 'now'. The principle is not as absurd as it may at first seem, and may actually explain some paranormal events. Synesthesia is far more common than once believed, and as an extension of synesthesia, it is conceivable that time is made in the mind, not in the data that senses bring in.

Atomic decay would not be a useful way to describe any form of ESP. The only way it would confirm any kind of ESP-like knowledge would be if your object passed through some radioactive "bath". Then a person with an ESP-like ability to sense radioactive decay (or anyone with a Geiger counter) would be able to say "This hairbrush was recently dragged through radioactive dirt!" Since most naturally occurring elements are not radioactive and therefore don't decay, this would be of very limited usefulness.

However, along the lines of Joe's answer, one could do just a little hand waving and give a person the ability to read the atomic composition of an item (something like a scanning tunneling electron microscope in their fingertips). Combine that with the knowledge of how various atoms and molecules interact, and you could derive useful information about the history of the object. For example, Sideshow Bob picks up a penny at the Kwik-E-Mart and is able to tell that it came in to contact with CaCO3, or chalk. Since Bart is always writing on the blackboard, Bob figures Bart must have held this penny at some point. Bob also detects a couple of stray uranium atoms, so Bob guesses that Bart probably got the penny from Homer. On the other hand, if the penny had chalk and CuCl2 (Copper Chloride...the compound produced when copper and chlorine react), Bob might guess that Bart got the penny from Marge (who used chlorine bleach to clean). Based on the amount of H2O absorbed by the CuCl2 and a knowledge of the environmental humidity levels, Bob could even make a rough guesstimate of how long ago Marge's bleach soaked hands touched the penny.

I don't know how much we'd learn from atomic decay, except perhaps the ability to date an object via radioisotopes with a touch. However, I would like to point out that we're still trying to full understand what the human body is capable of. Suspension of disbelief is not unfair.

I'd like to point out Achiem Liestner, lead optician for Project Avogadro. 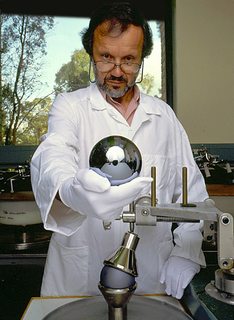 The sphere he is holding is a prototype for a new kilogram. It's a nearly perfect sphere. So perfect that, were it blown up to the size of the earth, the errors in it would be less than 2.4m high. He's quite the insanely talented optician. He also has a super power:

In addition to precision instruments, Leistner uses his hands to feel for irregularities in the roundness of the sphere. The research team has called his extraordinary sense of touch "atomic feeling".

No one quite knows how he does it. Certainly its some tremendously powerful accumulation of information from his fingertips. Perhaps our bodies are capable of more than we think they are. If so, a plausible explanation for extraordinary capabilities might be "why not?" All that is left is to explain why scientists, with all their precision, failed to find a repeatable experiment to prove psychometry out.

One answer could be along the lines of "water memory." Water memory is a homeopathic theory that water retains a memory of everything it comes in contact with. Science has not found any reason to believe this is the case. Every proposed hypothesis that has come forth has either been falsified or found to be unfalisifiable (and thus not scientific). However, all it takes is one repeatable success. Maybe your particular psychometry is a variant of water memory which, in your story, proves to have a valid scientific founding.

If anything, a story which includes a sketch of what sort of hoops homeopathy would need to go through in order to be recognized scientifically would be quite the interesting story, and by doing it in fiction, you're even in a position to create fictitious experimental evidence in support of the findings (something real scientists can never do)

Not the answer you're looking for? Browse other questions tagged physics abilities .

31
Plausible plasma weapons?
21
How plausible is an Alcubierre drive, really?
0
Does this matter sound plausible?
5
Meta-Energy: Plausible?
44
Is there a scientifically valid explanation for a circle of islands?
2
Explanation behind shape shifting
3
Good explanation for why aliens can't build nuclear engines?
11
A plausible explanation for the "ansible?" - FTL communications
16
Plausible reasons for Hovertanks